There’s been a bit of action going on at the old Bucket Fountain, icon of Cuba Street. We initially thought this was a retro ’80s David Copperfield-style magic trick, but it turns out it was just taken down for maintenance.

The fountain returned, with a fresh coat of paint, ready to splash the good folk of Cuba Mall once again.

But then a hand-written sign appeared up the top. It’s not so legible from the street, but zooming in revealed this message:

"Prove your hunter-gatherer skills by finding food in the forest at Te Papa."

Perhaps, with the Current Economic Situation, Te Papa is right to put the emphasis on natural history and away from art.

And if you’d like to escape the misery of modern life, you can now journey back in time to when the Bucket Fountain was first installed in 1969, thanks to the WCC’s The Cuba Street Memories Project. 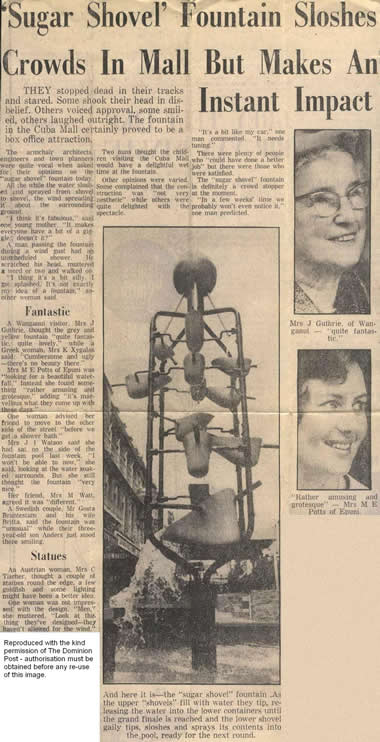 From this, we learn that the Bucket Fountain was originally nicknamed the Sugar Shovel Fountain and it was painted yellow and black (so 2000s!).