Wind-hurried raindrops pelt against the Shadehouse roof, which provides but meagre shelter as I wait out the passing shower. Cold droplets descend through green air into the expectant foliage, maintaining a humid atmosphere to feed a pteridomaniac’s wet dream. In a fern-fevered nation this is an orgy of patriotic symbols, writhing lushly in secluded stillness. The building itself is a triumph of Mitre Ten modernism, its folded roof forms evoking both futurist geometries and the domestic calm of wharenui and garden sheds. As the rain abates I leave the Shadehouse, noting the way that its crisp architecture is blurred by tendrils, by creepers, by fronds escaping the loose cage of mossy slats. Inside and outside intersect; nature and artifice intertwine. 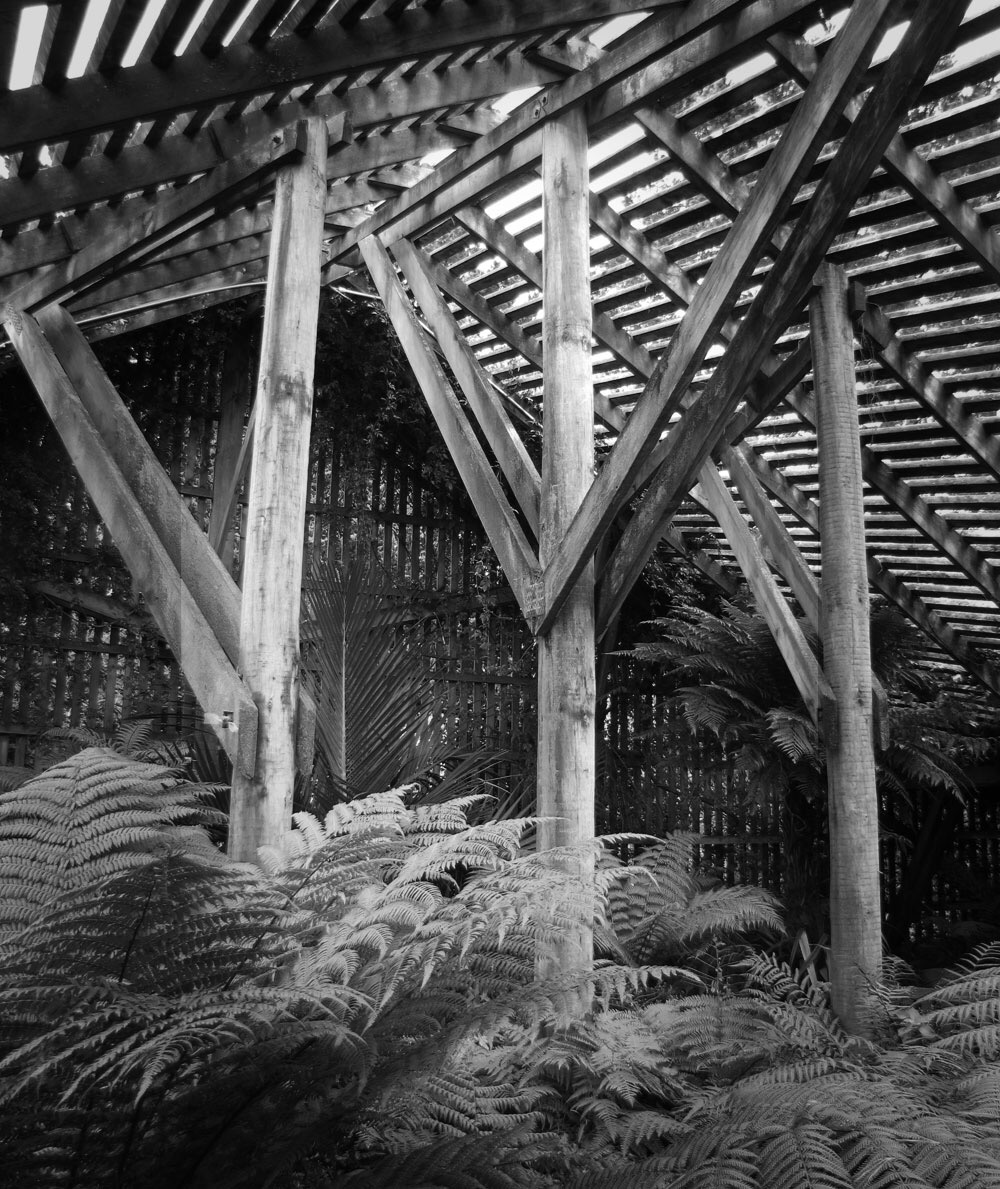 Outside, artifice dominates. As soon as this shallow bay had been cut off from the harbour, the Ministry of Works wanted it entirely filled with spoil from nearby earthworks. But the Harbour Authority dissented, worried that the suburbs were being severed from the water, and called for “an aquatic recreation reserve”. And thus it has become a quaint parody of coastal landforms; a municipal theme park; an unassuming, anodyne utopia.

The bulk forms of this nested, self-similar landscape (ponds within islands within lagoons within an island) were scraped into place by the machines of state. The details that rendered it a microcosm of suburban normality were then crafted by collaborations between Muldoonist make-work schemes and the earnest, civic-minded paternalism of the service clubs: Lions, Jaycees, Rotarians. The latter’s six-spoked wheel was stamped into the earth in the form of a rose garden, while the constant thrum of rubber on asphalt from just over the berm reminds us that the entire lagoon and park are products of a society that worships wheels.

More wheels crank rustily overhead. An ersatz windmill strikes an ominous Wicker Man silhouette against the monochrome sky, its empty sails churning away despite the wind, not because of it. As with the abandoned jetties built over the drains that fill the lagoon with stormwater and toxic silt, this is whimsy as a mask for infrastructure. Beneath its weathered shingles, culverts and covert valves control the tidal flow between the captive inlet and the true harbour. 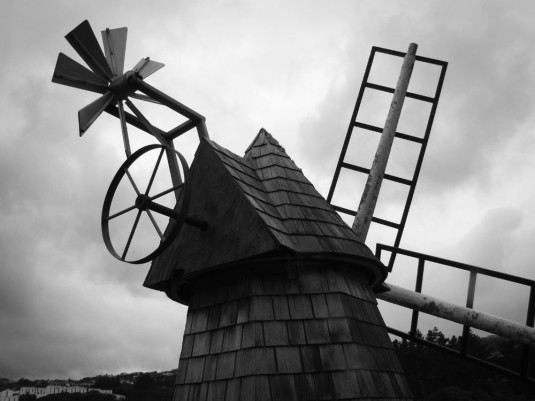 I skirt the concrete bank, following the tracks of a miniature railway. Another exercise in nostalgia; in literal and semiotic recycling. The weatherboard ticket office is signposted “Pipitea Station”, a name likely taken from the original central Wellington station. The engine (when it emerges for weekly joyrides) bears the livery of a long-defunct Wellington-to-Napier service. The tracks themselves were salvaged from a failed coal mine.

The real railway drew the first line that delineated this artificial landscape, but as a mode it’s now diminished, reduced to an infant’s toy while the big boys play with their Hot Wheels on the motorway next door. A tail-chasing loop, connecting nowhere to nowhere, in an age of driven linearity. A backwater. A slow, brackish eddy in the wake of a surging current.

Just a few metres past the station, the tracks disappear into a constructed hillside, their path cut off by stone walls and a bolted steel door. A tunnel for the sake of tunnel, existing solely to give its weekend passengers the brief chthonic frisson of sliding into the earth’s embrace.

Flat, shadowless light. Incessant drone of the unseen motorway. I don’t know what induced it, but even years later, I can feel the sudden wave of disorientation that overtook me in that eerily banal landscape. My sense of scale abandoned me, and I felt that I was no longer looking at a real (if miniature) railway, but that I’d been shrunken to the scale of a model. I feared that if I dared look closely at the shrubbery, it would reveal itself as monstrous scraps of dried lichen. I looked around for fellow humans to convince myself that they (and I) weren’t plastic figures—marooned passengers and static stationmasters, painted and placed by some lonely old man in a musty basement. But I was alone.

A bird screeched, and broke the spell. Clouds parted, and a sliver of light skipped across the silt-laden water. Nevertheless, as I hurried past duckponds and deserted playgrounds towards the northern exit, I couldn’t escape the sense of being observed. Overseen.

Across the road, the Police College dominates the tawny hillside. It dates from the era when Brutalism was losing its bush-hammered bravado, when public architects attempted to domesticate the rectilinear rigours of Modernism with toytown hips and gables. The result somehow manages to be both oppressive and ludicrous. There’s something mediaeval about that dense, incoherent cluster of forms: the main building resembling a Rathaus with its stunted tower, while accommodation blocks tumble across the scrubby slopes like a walled hill town. 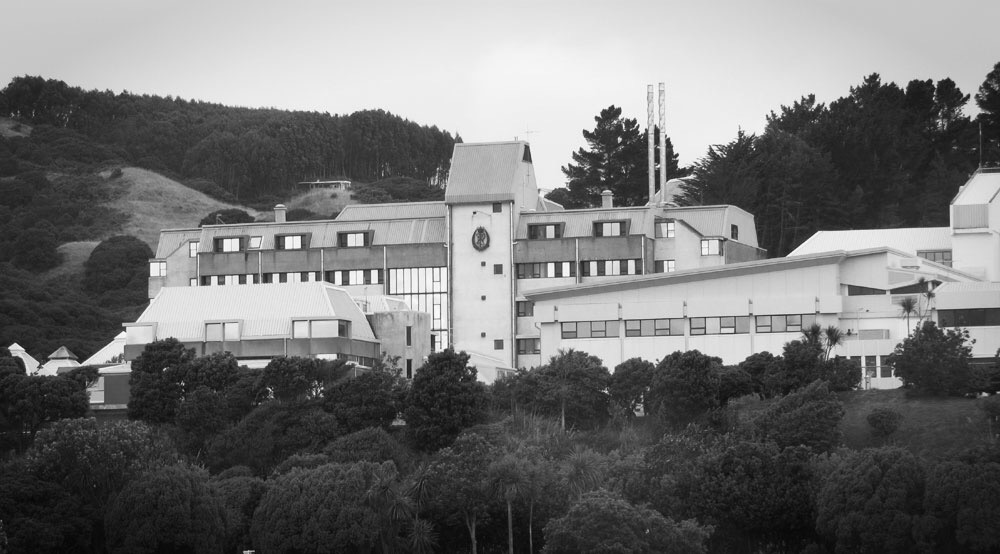 I have to walk some way past the Lagoon gates before I lose the sense of being silently surveilled. Papakowhai Rd curves northwest, tracing the old shoreline, then falls into step with the motorway. I pass a scrubby headland, the landscape opens up, and I enter the third of the captive bays. On my right, a manicured berm separate the road from a narrow strip of bush. I cross the lawn to peer through the foliage: a sluggish stream trickles through black mud, choked by weeds and clogged with incongruous artefacts. A broad section of concrete pipe, subsiding into the silt. A wagon wheel. A water pump, rusted and broken.

Somewhere beneath this waterlogged forest remnant lie the remains of Bowler’s Wharf. Once part of the infrastructure of trade between Māori and early colonists, it was destroyed by the earthquakes of the mid 19th Century, but if I knew how to look I might be able to discern its outline. Instead, I follow the stream as it broadens into saltmarsh, forming a moat for the retirement castle that sits on a low bluff beyond. 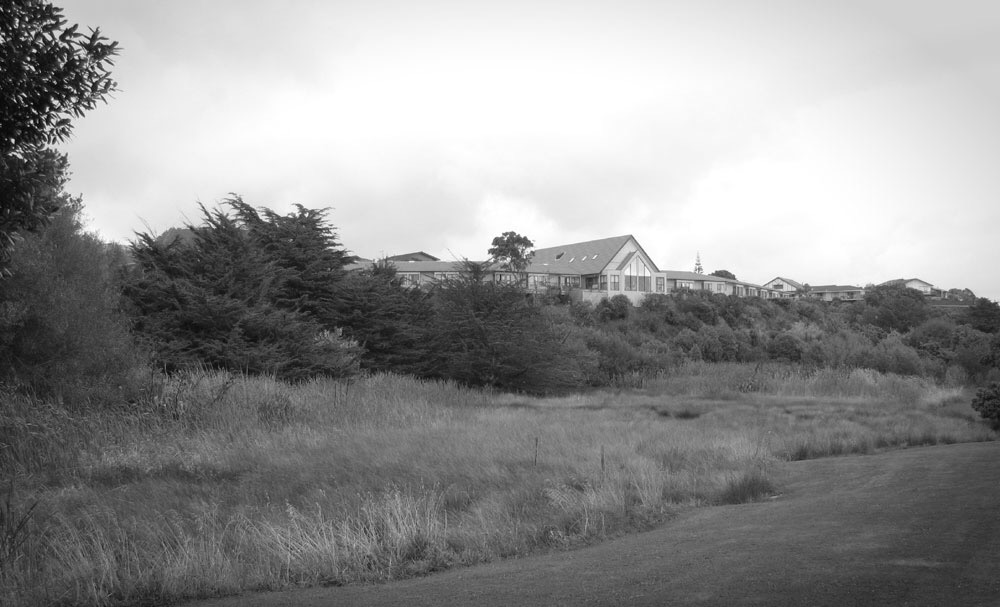 The stream channel meanders through reeds, rushes and a toxic fringe of lilies. Perhaps the residents above look down on the sepulchral white flowers and see their fate rising from the earth to take them. The calla lily’s funereal associations supposedly come from their whiteness, symbolising the restoration of innocence after death: a grim Judeo-Christian worldview, whereby life’s only redemption comes upon release from it. I like to think that the livelier inmates see, as O’Keefe and Freud did, vulval connotations in the flowers’ sensual folds.

The hills behind once bloomed bright with golden flowers, and this suburb has taken their name. Papakowhai, a land covered in flowering kōwhai. I used to take the name more literally, to mean yellow earth, and in roadside cuttings and the raw cuts that precede new development I see the sharp saffron yellow of soils that drifted in on the wind, and beneath the loess horizon, the more sombre ochre of shattered greywacke. In spring some of the bluffs still come alive with kōwhai gold, but such bright flowering more often signals gorse.

I’m reaching the northern end of the third artificial lagoon. To my right, an inlet has mostly been filled in to form a soggy lawn called Papakowhai Reserve, leaving a minuscule triangle of estuarine reeds and mudflats. On my left, there’s a still narrower sliver of saltmarsh: just a trickle of water, with rocky outcrops and mats of salt-loving succulents, trapped between two causeways. As the creek peters out, Papakowhai Rd becomes squeezed between another crumbling yellow headland and the tireless roar of the motorway. A jumble of green signage announces an upcoming junction, and a spindly pedestrian bridge rises up to cross State Highway 1. I climb the narrow ramp, buffeted by the relentless southerly, and begin my approach to Paremata.