Review: A Briefcase, Two Pies and a Penthouse 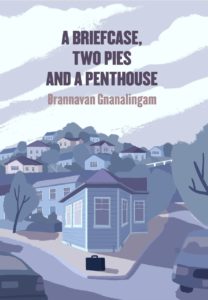 It’s a common grievance in 2016 New Zealand that, even with cack-handed dunderheadry in the ascendent and stupidity neck-and-neck with malice in a race to the bottom, nobody’s bothering to satirise this outrageous shit. Prime Ministerial candidates launch campaigns stood atop visual props, yet where is our Veep? Wither an Antipodean Iannucci to harvest all this buffoonery, craft Godzone’s own The Thuck of Ut?

The good news is that Brannavan Gnanalingam has been standing right here the whole time. His new novel, A Briefcase, Two Pies and a Penthouse, explores blokery, inefficiency, and lethal idiocy in the upper echelons of the organisations charged with keeping you safe by reading your emails.

The book opens with the explanation that an SIS agent really did misplace the eponymous embarrassments outside an Aro Valley house in 1981 — together with a Listener, three IDs and a notebook. But to lay bare the full extent of the bungle would test the satiric imagination even of readers raised on Tom Scott the Whiter and Mark Wright in cornflakeface. Nonetheless, the title’s three tokens — business, pornography, and cheaply-ground beef — serve as signifiers for much of the novel’s world.

Gnanalingam’s 2015 offering Credit in the Straight World cast the rise and fall of South Canterbury Finance as a (frankly unbelievably entertaining) comedy of mainland hubris, keenly drawn and shot through with laugh-out-loud observations. As the novelist’s perspective moves north, the action becomes office-bound, depicting the machinations of domestic intelligence in the War on Terror.

The setting this time round is John Key’s Wellington in  — to borrow another phrase off the telly — its Dickensian aspect, from high-rise waste to Hutt housing projects. Here cloak-and-dagger ingenuity is thin on the ground but inter-office skulduggery governs access to the fax machine. This is the fight against ISIS as fought in a world of Tinker, Tailor, Soldier, Chilled-Out Entertainer.

The comedy is gripping and cringe-inducing: one centrepiece follows the intelligence elite as they hit the turps and go home for the worst consensual sex ever committed to prose. It’s as mortifying and impossible to look away from as a train-wreck in which all the casualties are drunken middle-management office-bros. Well-turned and believable, this universe of cubicle-drones has a dozen different words for beige; and there’s real mastery in the way Gnanalingam weaves the story’s tragic threads through the sitcom-style office japery.

Its perspective’s achingly 2016-ready, immediate and worthy of posterity. At time of writing, certain themes — racial profiling, intelligence overreach, gendered inequality — are very much at the fore of the popular consciousness, often in ways that don’t readily suggest rip-snorting comedy. But this is satire on the side of the angels, not your down-punching newspaper-cartoon cheap-shots: the targets are puffed-up and ripe for lancing, the comedy pitch-black but forward-looking. Gnanalingam has done it again.