It’s enough to make a girl want to take a vow of celibacy and retire to a cave with a half-dozen rescued cats.

Enter Body Double, a new work at BATS that explores the silence, contradictions, joys, and shame around women’s sexuality and desire. Watch as two straight women explore their own desire in vivid, awkward, hilarious, and moving detail. It’s as though Karin McCracken and Julia Croft are making up for two lifetimes of being told to shut up with an hour-long show. It’s an emotional rollercoaster (much like being a sexual woman in modern society), to say the least. 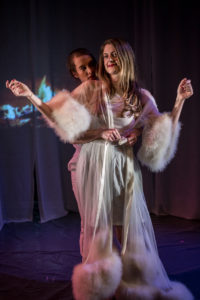 McCracken and Croft move seamlessly from cringeworthy tales of disastrous hookups to secret fantasies to rape culture to faking orgasms to the absurdity of media, all bound by an accessible discussion of just how much of our understanding of female desire is socially constructed and performed. If we want romance and tenderness, it’s because we’re conditioned that way. But if we buck the stereotype, are we just playing right into the patriarchy’s hands? Are any of our desires really ours? Does it matter?

While the performers are undoubtably brilliant, the show’s use of live video deserves a special mention. You can revel in the enthralling tech to distract from the sinking realisation that you might be the unnamed partner in that embarrassing reenactment. There’s something compelling about watching the carefully curated version of a scene projected on a screen even as you can see the performers in their entirety. Even when we know what we’re experiencing is a construction, that doesn’t make it any less real.

Without giving away too much, this show combines two of my great loves – chicken and sex. You’ll laugh, you’ll cry, you’ll cringe in relatable horror. Truly something for everyone. 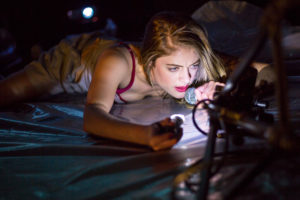 If you are a woman or have ever wanted to fuck a woman, you too should see it. If you’ve ever caught yourself intellectualising the problematic-ness of literally everything you’ve ever loved, you’ll like Body Double. If you are currently fucking someone (of any gender – let’s be real, we are universally bad at talking about sex), you should see it together, and then stick around BATS, have a drink, and discuss your own desires.

That’s the only way we ever move forward, so kudos to McCracken and Croft for giving us so much juicy fodder for that conversation.

Body Double is on at BATS until 25 November and again at the Auckland Arts Festival at the end of March next year.

All photos by Tabitha Arthur.