I tried stamp collecting when I was younger. It ended somewhat disastrously when I got bored with the gummed hinges used to afix stamps to the album pages and instead switched to PVA glue. My grandfather would not have been so proud of me.

And it’s another philatelic poppa that’s at the centre of Circa Theatre’s new play Mauritius. It tells the tale of New York half-sisters Jackie (Danielle Mason) and Mary (Lyndee-Jane Rutherford) and the stamp collection that belonged to Mary’s grandfather. And in that stamp collection is the extremely rare and extremely valuable Mauritius "Post Office" stamps. 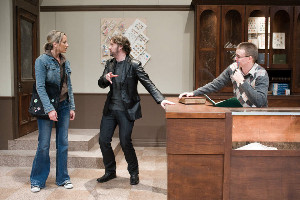 The Jackie and the stamps come to the attention of charming rogue (and stamp lover) Dennis (Andrew Foster), who knows a man – the thuggish Sterling (Jeffrey Thomas) – who may be able cut a deal. And then there’s stamp dealer Philip (Aaron Alexander), who’s grown weary of n00bs stumbling in wanting their relatives’ collections valued.

The script tightly moves between the five characters, unfurling bits of history and creating new tension with every scene. It feels a bit like a David Mamet flick, where all is not what it seems, and no one can really be trusted.

Danielle Mason plays main character Jackie like a cross between a young Sarah Jessica Parker mixed with a bit of Robin Wright crazy attitude, and she manages to be a bit of a bitch-arse without losing the audience’s sympathy.

Playwright Theresa Rebeck has written for Law & Order: Criminal Intent, and indeed Mauritius sometimes has some of that show’s dark, thrilling pace to it. It’s a sexy, well produced play.

And on a side note, it’s worth mentioning that Circa’s production of Mauritius is sponsored by Chris Finlayson, otherwise known as the Minister for Arts, Culture and Heritage. Nice one.