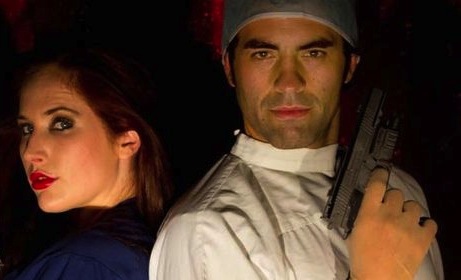 The Gryphon’s production of Serial Killers is a period piece set in the days when instead of saying “YouTube” we said “network television,” and instead of bemoaning “reality TV” and its effects on the unwashed-at-large, we bemoaned “soap operas” and their see above. One assumes it’s intended as evergreen commentary upon the early 2000s when the play was written, though characters tote 2012-era laptops while riffing at length on shows like Wiseguy (1980s) and Gilligan’s Island (turn of the prior century?), so let us just move forward under best assumptions.

The play’s divided into two areas: the soap-opera world, in which every turn heralds a new revelation to be delivered via booming theatrical gesture; and the “real world,” in which every turn heralds a fairly minor advancement of the play’s myriad plot threads, to be delivered via see above. It’s in the soap-opera portions that the actors are best pitched. Here Alan Carabott’s wrought gesticulations and stentorian delivery breathe life into intentionally purple wads of exposition, while Ange Fitzharris’ sex-Bambi daffiness sits perfectly alongside the outsized agents of this reality-twice-removed; whereas downstage she sometimes seems like the only one in on the joke.

Because it’s when the actors come down into “reality” that the show’s true dimensions reveal themselves. Serial Killers‘ plot concerns the writers of a long-running New Zealand medical melodrama, and the trouble that ensues when a lifetime star is written off the show. Penned by Outrageous Fortune co-creator and Shortland Street writers’-table veteran James Griffin, the play is “meta” from back when the word we used was “postmodern,” a show-within-a-show shaped by the drama-outside-the-drama. One doctor, we’re told, “is a fictional character; fictional characters don’t masturbate.” But given that we’re watching actors playing writers playing actors playing characters for the purposes of telling audiences that audiences like characters who come out of writers feuding with actors, someone’s certainly rubbing one out on our time.

Andrew/Gilligan thus becomes the engineer of the show’s “real” drama: a tulpa conjured by mad monks, the writers’ neurotic hypersexuality made neurotic, hyper-sexualized flesh. He’s an effective shadow not just for head writer Alan (David Cox, who inhabits Alan well but plays his character arc as a journey from “world-weary resignation” to “world-weary resignation with a bandage over his ear”), but for the play’s entire cast. As an audience, we can see that Andrew clearly has no power: the handsome, affable Simmons plays him as a shrieking twit, low-status even when he’s threatening other characters’ lives, forever going out of his way to provide them with opportunities to turn the tables. Their steadfast refusal to do so gives away the lie: these writers may bemoan their own ability to shape a compelling narrative, but if they’re caught in a bona-fide plot, damn if anyone’s going to drop out before the plot resolves itself.

Another thing that’s happened between Serial Killers‘ premiere run and the present-day is the proliferation of reality-TV-inspired mockumentaries such as The Office. One recurring joke on that show’s American incarnation had protagonist Michael Scott convinced of his talent for improv, forever ruining sketches by resorting to the cardinal sin of pulling a gun onstage. Thanks to Carrell, it’s now fairly common knowledge that, if you’re not Brett Ratner and this ain’t Rush Hour, “dude pulls a gun on them” is the epitome of laziness as reversals go. But it’s all Andrew has, and so it’s all we have.

And it’s not enough. Serial Killers is a fairly unpleasant little piece, a bilious nugget of calcified resentment with nothing nice to say about anything and too many words in which to say it. Ania Upstill does her level best with the character of Simone Sapphique, who exists because Serial Killers considers the notion of a gay woman to be inherently funny. The closest anyone comes to profundity is in observing that both dramas and human lives end eventually, and that “that’s alright.” Given that this observation comes as the actors are suiting up for final curtain, “that’s alright” is the play’s rarest of understatements.

And here’s where the pitfalls of undertaking an act of metafiction become hard to navigate. When a play’s cast is comprised entirely of people whose job it is to know good writing from bad, the latter becomes doubly galling to sit through. “It’s an unsatisfactory plot twist,” Alan says of Andrew’s script idea: “Not properly set up, contrived just to get me going.” It’s hard to be sure which of Serial Killers‘ unmotivated developments or irrelevant bouts of offstage wackiness would dangle heaviest from this particular petard. “There’s no drama!” Alan later roars, doing little to interrupt the routine.

There’s several lengthy riffs on the pains of having to deal with bad actors, which is just courting disaster. The Gryphon players inhabit their characters as best they can, but none appear to have studied this sort of fast-paced, jab-and-riposte dialogue performed at the appropriate tempo. Every line is preceded by a pause for thought, delivered at a stately, Pinterian pace, accompanied by copious mugging and an elbow-to-the-gut pause for laughs. (Perhaps the characters were too busy looking down their noses at television to take note of how a West Wing or Gilmore Girls turns snappy dialogue into winning rhythm).

This is why the show’s show-within-a-show portions are its best. Writers, one character suggests, always to prefer to write about writing; similarly, time and again we’ve seen how many local actors, given the chance, prefer to pantomime the act of acting: lampshading their own theatrical excesses at the expense of any internalized power. Here they’re given a raised stage on which to strut, while the bulk of the onstage action takes place at ground-level: much time is spent with characters sat around a huge “Table of Pain,” lowering their status further and creating staging dilemmas that draw us out of this reality. Many of the play’s pivotal lines are delivered by characters with their backs to the audience, their fury sucked up by that big table, the recipients of their ire equally blocked off from viewers.

Able playwrights such as Martin Crimp, or the Davids Mamet and Rabe, have wrung pitch-perfect black comedy from the world of behind-the-scenes misanthropy; even their direct-to-video cousin, Neil LaBute, manages the odd misogynist zinger. But these writers’ works tend to run little over half Serial Killers‘ time, and to take audiences and characters alike a lot further while they’re doing it. Griffin’s play establishes a universe in which everyone is smarter than soap operas, then spends two hours congratulating us for being complicit in this judgement. It’s a play for those who love to proclaim shows like Shortland Street a “guilty pleasure;” but if this was Griffin’s way of excising any lingering ambivalence toward the show, the production’s few authentic comedic moments are much better suited to taking on that most tired of mantles.