So I’ve been thinking about Bond Street for a while. I’ll credit Councillor Ian McKinnon for showing me what’s wrong with it. I happened to be speaking to him at a morning tea break after giving an oral presentation to a council sub-committee. He showed me a series of photos that had been given to him: of Manners Street to the south and Mercer Street to the north, both looking groomed and civilised, and of Bond Street, lined with taxis and lacking any sort of urban amenity. I believe we can do better than this.

Council is currently planning changes to the area. Submissions are open on Traffic Resolution TR70-12 (PDF). The rationale for the change is reasonably strong – 7 reported crashes at the intersection of Bond and Willis Streets since 2010. The basic proposal is also reasonable – closing the intersection and making the west section of Bond Street into a cul-de-sac. 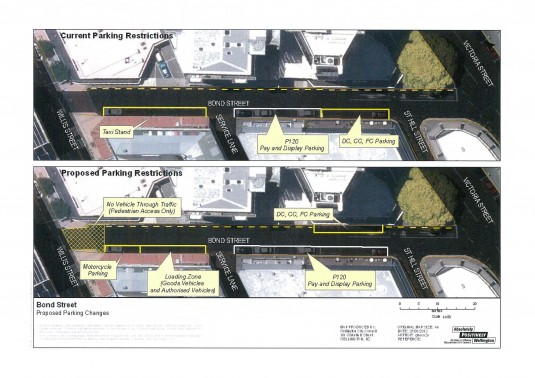 The proposal is fairly straight-forward. It moves the taxi rank from Bond Street to Mercer Street to handle the closure of the intersection and juggles around the remaining parking allocations between the two streets. There is a net increase of 3 loading zone parks, so the project is revenue-neutral for parking. Nothing surprising. There isn’t much extra space available to add further parking spaces. A few nearby buildings have underground parking that requires clear access. Rubbish and service vehicles need adequate space to maneuver as well. It looks very much like a traffic engineer’s proposal. What’s missing is any sort of urban amenity or context.

Instead of maximising parking, we should be maximising amenity. Here’s why:

That’s a list of just the food and drink establishments on this section of Bond Street. Victoria St cafe and Mojo both have outdoor tables on the footpath during the day. Fork & Brewer and Lovelocks have balconies. Bond Street can be a vibrant area of the city, both during the day and into the evening. The businesses have provided destinations, but the street is set up in a way that forces people inside. I spent a few days after work watching the pedestrian activity. Numbers were quite low and very few people stopped on the street. Looking down the line of cars, it’s easy to see why. There’s no reason to stop unless one of the businesses is already your destination.

I think we should make Bond Street a shared space. Not like lower Cuba Street – which is really just a narrow parking lot – but like Woodward Street. Most people don’t think of Woodward Street as a shared space, which is exactly why it’s the model that we need to adhere to. Vehicles can move through there when they need to, but pedestrians rule the space. Woodward Street is safe and it works very well.

Why do we actually need parking spaces on Bond Street? Taxi rank overflow was blocking any real use of the pay-and-display parking spots and the rank needs to be moved to close the Bond and Willis intersection, so I don’t see a plausible argument for current parking revenue. For loading zone activity, lines don’t need to be drawn in explicitly. We certainly don’t have parking lines on Woodward Street and the early-hour loading zone use of Cuba Mall works without lines of any sort. The only argument for drawn parking spaces is for diplomatic parking. The council proposal moves those parks to the north side of the street, in front of Trade Aid. I think that location is fine, assuming there’s an obligation to keeping the diplomatic parking. It’s on the shaded side of the street and leaves the sunny space for people and activities.

This is roughly what I’d aim for:

Why question the motorcycles? Well, I don’t have a strong opinion as to where they should go. Don’t get me wrong, I think that motorcycle parking is important, but I think that the location doesn’t have to be specified just yet. The smaller parking footprint makes the allocation a bit more flexible. I’ve drawn in some space, but it’s probably not the best space for it.

This idea is not without risks. There is a substantial amount of covered parking hidden within the nearby buildings. Drivers coming out onto Bond Street would have to be pedantically cautious at all hours of the day. This may stress patience at peak demand. Additionally, I don’t expect that councillors would be particularly agreeable to the removal of seven paid car parks, relative to their proposal, or four car parks currently on Bond Street, regardless of revenue projections. I would argue that the benefit to the businesses should take priority and also that a project like this is aligned to the Wellington 2040 Strategy.

So how do we fund it? The simple answer is to keep it cheap. I don’t know how council intends to block vehicle access between Bond and Willis Streets. They’ll do what they do. The rest of the proposed parking changes are just paint and signs. So let’s start there. Obviously, paint isn’t going to stop a car from hitting a bank of tables, so the last element would be something like concrete parking blocks or heavy planters to act as guides. When the economy is better, we can worry about making things pretty. For now, call it a bit of tactical urbanism.

Consultation is open until October 26, so there’s not much time. I’m submitting basically this post and if there’s a chance to speak directly to council, I’ll happily take the time. I believe in good spaces. Bond Street has the potential, but needs our help.

Urban Issues
#Bond St, #parking, #shared space, #wcc
Previous Post
What do they want and how do they get there?
Next Post
Review: The truth game