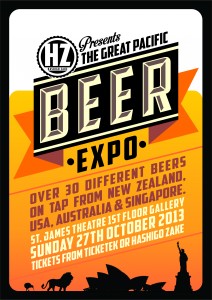 Getting to try lots of beer in a nice warm space that’s not a concrete tunnel sounds like a bloody good idea, which is why I’m looking forward to the Pacific Beer Expo which will be on Sunday October 27 at the St James Theatre.

In typical fashion for organiser Dom from Hashigo Zake, he doesn’t hold back in the press release:

“October 27 the highlight of 2013 for New Zealand’s most demanding consumers of beer.

With less than two weeks to go until the annual Labour Weekend event, the lineup is close to being finalised. Organisers can confidently predict that the carefully selected menu will represent the most geographically and stylistically diverse range of beers ever offered at a single event in New Zealand. From experimental spiced beers from Singapore to Californian hop-bombs, the festival will once again present the state of the art of brewing by small, independent breweries in the
Pacific Rim.

In addition the event will represent exceptional value for money compared with other recent beer-themed festivals in Wellington. Every ticket-holder will receive a generous allocation of tokens for the purchase of food and drinks even though the event has never sought nor been given a subsidy from Wellington ratepayers.”

Emphasis mine, because that’s the reason I’ve never gone to Beervana. Tickets from Ticketek (watch out for hidden costs) or Hashigozake over the bar are $50, and that includes  souvenir glass, a programme and plenty of tokens for food and drink to get you started.