The stream is now fully canalised, a tame channel running arrow-straight towards the harbour, as subtle as an engineer’s ruler. It once meandered across the broadening valley, softly folding into the estuarine flats. On its left bank, the colonial forces built Elliot’s Stockade to oversee the new road, but the stream flooded and drove the fort up onto the surer ground of the adjacent bluff. The colonisers eventually took their revenge, subduing the unruly watercourse by forcing it into this unnatural furrow. The land is now safe for higher purposes: building recyclers; the liquor-industrial complex; funeral homes.

Wildness remains, though only in degraded, desperate, atavistic forms. The constructed banks swarm with brambles and Tradescantia, and among the resurgent weeds lie the signs and spoor of modernity: shopping trolleys, street signs, road cones. It’s as if they were deposited by a great flood, rather than the individual acts of local pranksters. Vandalism as an avatar of vengeful nature. 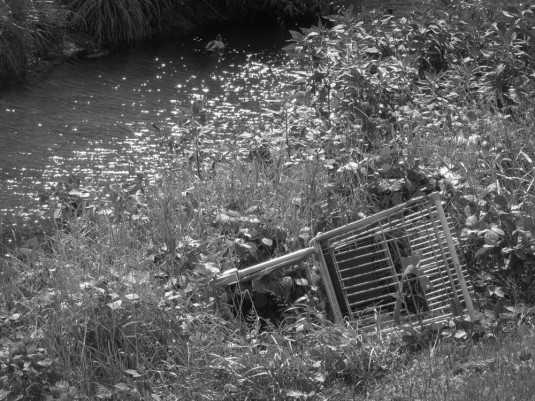 Only a few hundred metres now to Porirua station, and I’ve had enough walking for the day. But just as I’m looking forward to the rest, a train rattles past me, telling me I have to wait half an hour for the next one.

In the wake of the departing carriages, I seem to catch my name in the air. The sun has been relentless since Johnsonville, so I put the hallucination down to incipient sunstroke. But it comes again, clearer this time. I turn.

Across on the other bank, parked up beside the stream, I see a colleague waving at me. “What you doing out here, mate? Need a lift?” Briefly, I’m tempted. But whereas for him, someone walking in a place like this must be doing so for want of other transport, for me walking is its own imperative. I make a noncommittal gesture, and stride on. Well, “trudge” would be more accurate, but I try to do so with purpose and élan.

While I have time on my feet, I decide to seek out a nearby site of true national significance. I cross the river on the Station Rd bridge and make my way towards Cobham Court. But first I must negotiate a labyrinth of roundabouts, disappearing footpaths and the contemptuous ramparts of windowless buildings. It’s a cunning design, devastatingly effective at deterring anyone bloody-minded enough to dare navigate the city on foot. The hapless intruder is constantly given hope, then thwarted by blind alleys or sucked into the air-conditioned vortex of North City. The Gruen Transfer begins outside the visible walls of the mall. Scripted disorientation. Spatial indoctrination. A retail distortion field.

Eventually, the stalker finds himself on the other side of the zone, staring up in search of a sign. But the sign is gone. It has left but a shadow, a semiotic afterimage; what was once golden now just a slightly deeper shade of blood red. 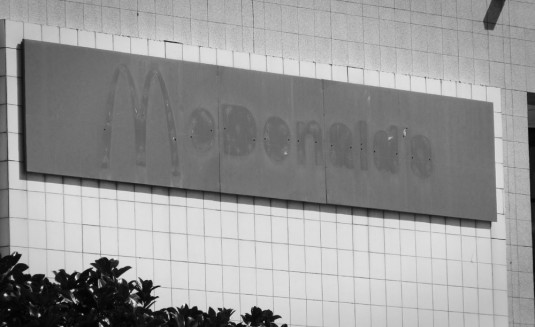 This is the site of the first McDonald’s in New Zealand. Its arrival was a phenomenon of such mythic resonance that it seems to have engendered false memories in local politicians, inducing fond recall of an event that should have been shrouded in the soft fug of infantile amnesia. The franchisees retell the preparation as an epic battle, with plucky capitalism eventually vanquishing the dark forces of bureaucracy, unionism, and inferior local ketchup. The grand opening was like the fall of Saigon in reverse, as Ronald McDonald was nervously helicoptered in to a stampeding mob of star-struck locals hungry for American glamour and two-for-one burgers.

The shockwaves spread outwards, and the national psyche (and cholesterol count) was never the same. But ground zero is now barren, a glass and tile shell on the edge of a deserted asphalt court. The franchise has moved down the road, to a 24/7 drive-thru set in a moat of carparking. The vanguard of fast food was no longer fast enough.

I head back towards the station. The old shopping centre is simultaneously weary and vital. Weary, since the commercial and human energy has visibly ebbed since the peak of post-war optimism, when the old village and sandflats were swept away to be replaced by the heart of a model modern city. Vital, since the surviving businesses, even in their struggles, embody the community far more than the cold fluorescent pulse locked within the glowering mall. High-tech tensile sails failed to tempt back the shoppers, but even $2 shops, down-at-heel bars and dusty bakeries exude more individuality, urban determination and Porirua-ness than the busy tills of North City and the Megacentre.

I have to pick up my pace as I fight back through the maze to catch the next train, but even in the grim service lanes I spy humour, invention and weirdness. The triple links of the Independent Order of Oddfellows adorn the breeze block wall of the Ngāti Toa Lodge. The logo for Gemini Power Training is a headless, pumped-up gynandromorph. A sign reading “Alley Barber” is both locationally accurate and a pinnacle of the hair-punner’s art. The street finds its own uses for the street. 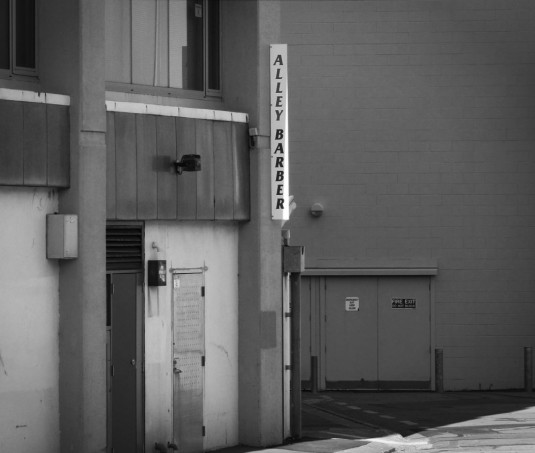 I return a week later, and the year has turned. The sun-beaten haze of a lingering summer have been driven away by a squally, biting southerly. In the station underpass, the colours of a dozen murals blare out from the walls, as if competing to dispel the gloom of the day.

Manically upbeat, like overeager hosts haranguing their visitors about their beautiful home and talented children, the murals blather on about natural attractions, Māoritanga and urban diversity. Some are high-gloss brochures blown up to a ludicrous scale (pūkeko the size of moa), but oddities creep in. Pacman ghosts and grinning pineapples. Conspicuously white hipsters thumbing a ride on an acid-green night bus. Pigeons and cormorants watching patiently from train windows while a blood-red sun climbs into a curdled sky. It’s Bill Hammond’s rush hour. 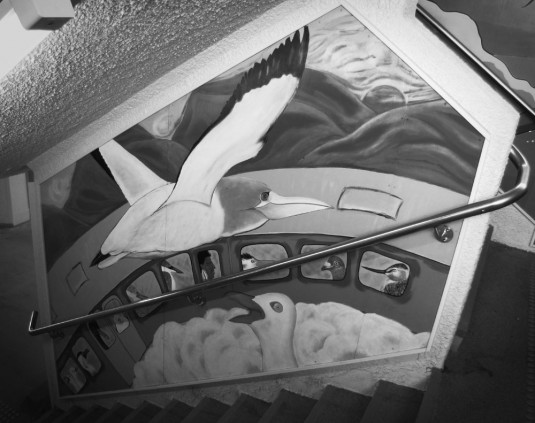 I cross a bridge and walk north along the left bank. The water is high and turbid, shivering beneath the gusts that whip down the valley to meet the tide. Porirua; Pari-rua; two tides. The two arms of the harbour, Onepoto and Pauatahanui, defined by the lunar swell of their waters, and in turn defining the communities that found their edges. After 15 long inland kilometres, I’ve reached the tide again.

The channel starts to break and bend, regaining some of its natural swagger after its concrete captivity. But even the “natural” is cultivated: earnest plantings of hebes and toetoe, a calculated reanimation of a murdered ecosystem. On one bank, barbed wire and terse warning signs (“Unauthorise Parking/Will be Tow Away/at Owner Expense”—gruff poetry with no time for grammatical niceties) guard the rear yards of big box retail. On the other, the Kenepuru Stream spills out from a cage of railway wires and steel girders.

The path leads beneath the motorway ramp, scraping the water’s edge. It’s not long since it was last submerged—a fringe of waterlogged flotsam lies washed up on the slippery concrete. Postmodern jetsam is tangled among the driftwood: Pump bottles, a plastic bowling pin, the wedge heel of a sneaker. Amphibious taggers have ventured into the tide to put their marks on the raw concrete pylons of the overbridge. I hunch beneath the low beams and pass through, stalked by a watchful black swan. 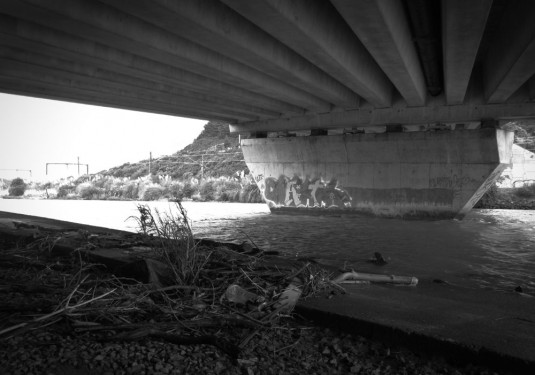 The stream meets the sea along the invisible line of the Ohariu fault. The tide beats in and out of the double harbour, like slow deep breaths through a pair of lungs…but the lungs are choking, sediment clogging their channels as the denuded hills melt away with every rainstorm. And the silt is laced with poisons: pesticides; paints; an elemental potion of mercury, lead and zinc. Since Johnsonville, every roof I’ve passed has added its dose of heavy metals to the cocktail, washing down the stream to join the toxic slurry. Metal fever. Dead harbour. The foul(ed) mouth of an urban poison-shed.

I pick my way through the Pak’n’Save carpark, dodge the roundabout traffic, and start across The Ramp. That’s how it’s marked on the maps: not just any motorway on-ramp, but worthy of capitals and the definite article. It spans river, rail and highway, thrusting upwards with the steady insistence of an aircraft climbing into the sky, before curving left and swooping down to join the motorway itself. Armco and asphalt on one flank, greywacke and gorse on the other, I walk on against the traffic’s impatient tide.