Under the Pollsters’ Radar

At this stage of the election cycle we are drowning in polls. While each media outlet treats its own commissioned research as holy writ, they all have their own strengths and weaknesses, and it takes something like Danyl McLauchlan’s tracking poll charts to smooth out the noise and calibrate them against actual election results. Even with that, there’s a growing problem with traditional polling: it only reaches people with landlines.

Polling cellphones is difficult, and some pollsters think that the resulting bias isn’t such a big issue, using demographic weighting in an attempt to compensate. However, there are other academics and polling companies who acknowledge that it is troubling. For instance, statistician Dr Andrew Balemi has been quoted by Colmar Brunton as saying “the fact that not all households have landlines is an increasing concern with CATI [computer-aided interviewing].  However, in the absence of any substantiated better technique, CATI interviewing remains the industry standard.” That leaves a growing number of people (about 15% of households) out of the poll results.

That wouldn’t be a problem if this omission were evenly distributed. However, while there’s debate about how significant the bias is, landline-free households do tend to be younger and less well off. I decided to see whether there were also geographic variations, by mapping the proportion of households without landlines. 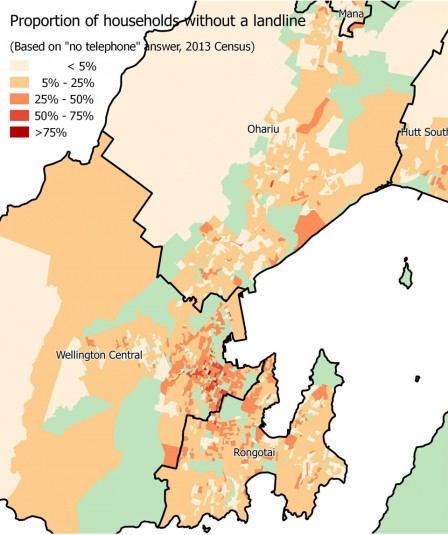 This is based on the somewhat ambiguously-worded Access to Telecommunications Systems question in the 2013 Census (officially, the “telephone” answer is intended to mean a landline, though it could easily be misinterpreted). With that proviso, some geographic patterns are obvious. In most of the outer suburbs, fewer than a quarter of households eschew a fixed line. This proportion increases in the inner suburbs, and in the central city, landlines are an endangered species. Given that this is the most densely populated part of the city, this is significant, so let’s zoom in to Te Aro for some more detail. 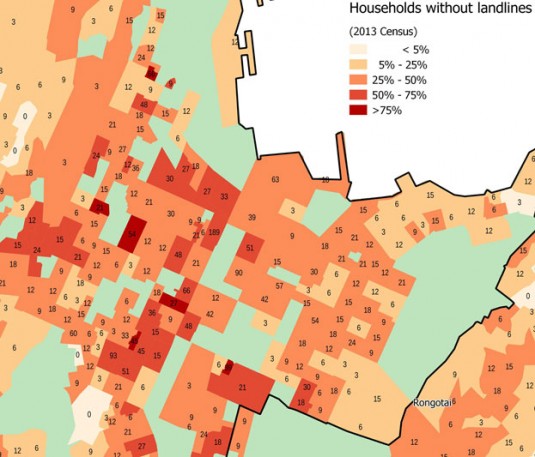 As well as shading the meshblocks with the proportion, this labels them with the approximate number of households that lack fixed-line phones (Stats NZ randomly rounds the data to base 3 for privacy reasons). One single block has nearly 200 of these (that would be the Soho apartment building), and looking at the numbers it’s clear these would add up quickly. A large proportion of these homes would have more than one adult occupant, so there’s a whole community of city dwellers whose voices are going unheard in the polls.

Some have argued that people without landlines also tend to be the people who don’t vote, and that’s certainly consistent with enrolment patterns suggesting that young, mobile people are less likely to enrol. There’s likely to be some influence from the fact that Te Aro has a lot of new apartments: when moving into a brand new place without an existing landline it’s easy to keep it that way, whereas people in long-established homes would have to make a conscious decision to change. Settled households with older inhabitants in Karori, Johnsonville and Seatoun are much more likely to be polled than the young, dynamic population of the central city. Inner-city issues, priorities and aspirations go unheard, and the voice of the polls is the voice of the suburbs.

Of course, there is still one way to guarantee that your voice will count, even if the pollsters can’t hear it. Vote.