[Alf’s back after a long absence! You can catch up on his previous post in this series, or read all Notional Significance posts.]

The path skirts the six-lane highway, compressed between traffic and hillside, passing beneath stolid, galvanised totems that awaken onrushing commuters to an imminent decision. Soon the curve of the carriageway straightens, but the scrubby bank on my right continues to bend away, tracing the former shoreline, and a captured landscape reveals itself. Okowai—a bowl of water—a prescient name for what became an accidental lagoon, cut off from the harbour by the human aversion to indirectness.

The reshaping began with the railway in the late Fifties, a slender curve draped lightly across the tips of the headlands. Then came the motorway, which bulked out into a hefty swathe of tarmac and berm, usurping the fractal filigree of the estuarine edge. From the elevated, time-dilated perspective of the motorway, the resulting lagoon seems little more than a ditch, an insignificant patch of dampness at the foot of an undistinguished hillside. But from down here, it’s the road that’s the anomaly, revealed as the causeway it is. 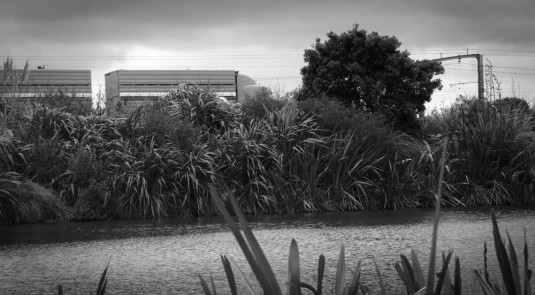 I fancy that Ballard would have felt at home here: like Shepperton, this is an ambivalent landscape delineated by severed bodies of water; by the railways that brought the hinterland into the city’s hungry grasp; by the obsessive motion of motorways and the aggressive normality of domestication. Flood-meadows, oxbows. Dams and culverts. An inter(tidal)zone zone in the dissolving boundary between waterlogged land and silt-laden water, between nature and artifice, between nostalgia and impatient progress. A squadron of ducks crashlands in a sediment trap, then circles its raw perimeter, eyes as opaque and yellow as the shivering water. Ballardian meets mallardian.

On the landward side, a gang of bulldozers lurks next to their handiwork: a ragged ziggurat of ochre earth that no longer resembles a hillside, but is still far from the suburb that it’s destined to become. Above this, the Magrittean loneliness of streetlamps without streets, standing around on the ridgeline with heads bowed: some clustered together as if kvetching at the bitter weather, others mooching off on their own. Someone called a meeting but they didn’t get the memo. 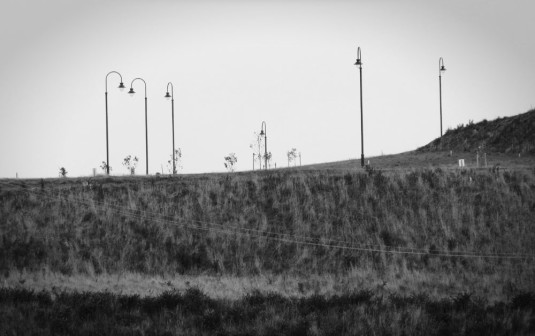 Since I began my journey, this is my closest encounter with sprawl’s slow stormfront. For years, this land was lumbered with the name “Aotea Block”, where the mana of Turi’s great waka was brought back to (colonised) earth with the clunky, cadastral “Block”. Now that the embryonic suburbia is ready for sale, the developers have pared that back to the more euphonious (and marketable) “Aotea”.

Not that there’s anything remotely habitable about this hillside yet. Nick Papadimitriou referred to the suburbs as “the momentary dream of a mushroom god”, but as resonant as that image might be, it seems too gently organic for the violent transformation that precedes the birth of a suburb. I’d like to imagine houses sprouting in slow motion from rich loam, the visible fruition of stealthy threadlike networks, but what I see is a merciless flaying of the land; amputation of hilltops; suffocation of valleys. Shattered trunks and gouged trenches. Blasted earth.

From beyond the barbed wire and warning signs (“THIS IS A MULTIPLE/HAZARD AREA”) comes the nasal snarl of dirtbikes. No longer farmland, not yet neighbourhood, the land-in-limbo becomes an opportunity for trespass and adventure (of a rather more hectic variety than my plodding pilgrimage and even slower writing). By the time I write this up, the diggers will have returned, replacing the rutted trails with broad, standards-compliant streets, ready to dream the orderly dreams of a dormitory suburb.

As the rough path meets Okowai Rd, a semiotic contradiction catches my eye. A “NO ENTRY/One Way Road” sign painted in folksy letters on a cheerful blue background, next to a carved wooden pineapple—a fruit that once symbolised hospitality and generosity, due to its precious rarity in Europe. I turn, and walk against the grain (which could describe my whole walking project), past the moss-softened fruit and into the shady forest beyond. 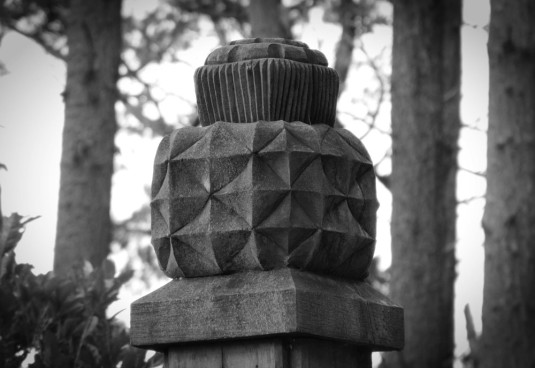 The pine trunks are tall and bare, swaying and groaning in the insistent southerly. Their upper reaches are tightly strung with cables, a tangled network recalling the overhead wires of the nearby main trunk line. These bind together an elevated archipelago of crude platforms, like children’s treehouses blown up to the scale of a forest civilisation on an arboreal moon.

A sign informs me that this is no ordinary forest, but “Adrenalin Forest”: a privatised adventure playground where adults pay to face down their fear of gravity. On their logo, an ape swings nonchalantly from a wire. An invitation to atavism, tempting us to shed our civilised layers and revert to our primal selves. Down by the motorway, Ballard’s ghost watches the incoming tide with a wry smile. 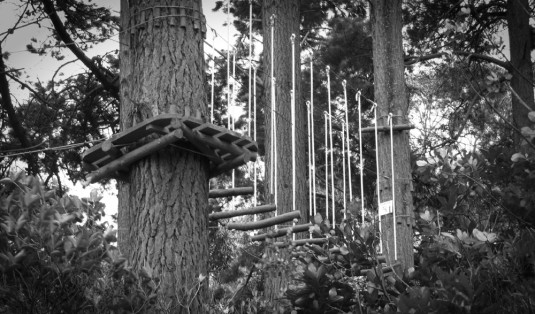 But compared to the kids on their trailbikes, carving up trails of two-stroke transgression through the gorse and mud, this is a grimly regimented form of “adventure”. The goal is teambuilding, a sylvan confidence course to prepare you for the confidence trick of corporate climbing. It reduces adventure to mere adrenalin: the direct injection of hormonal arousal. I prefer to think that adventure is about discovery, about not knowing what might emerge around the next corner, or what will emerge within you during the journey.

I pick my way through pine and resurgent bush. Here and there I stumble across remnants of farm infrastructure, subsiding into lichen and ivy. A galvanised outbuilding has been covered with a surprisingly neat array of tags, their stylised multicoloured scrawls following the horizontal corrugations like hieroglyphs recounting solemn dynastic business. Many of the tags are repeated over and over—I think I can make out RAZOR, ABC, KEEN—and now all I can think of is lines on a blackboard, as if this were the result of a detention class for taggers.

As I crest the top of the knoll, the undergrowth thins out. There are more handwritten letters, but this time signalling more respectable pastimes: “ATTIC ARTISTS/CAMERA CLUB/FIBRECRAFTS//POTTERY”. Mortarless kilns and dense mats of pine needles give way to rock walls, flower beds and driveways, and then the stately form of Gear Homestead.

James Gear was a failed prospector but a very successful butcher. After attempting to carve up Otago rock in search of gold, he found there was more money in his old trade of carving up animals, and at his peak his fleshy empire stretched from Te Horo to Karori. He had a butchery shop on Lambton Quay, and his rather less salubrious meatworks (including the offal pits on his eponymous island) dominated the economic and olfactory landscape of Petone for generations. As one of the first exporters of refrigerated meat, his legacy could truly be said to be of national significance. Now his Italianate homestead, once the height of good taste, is better known in popular culture for exploding sheep and aliens with a (bad) taste for brains. 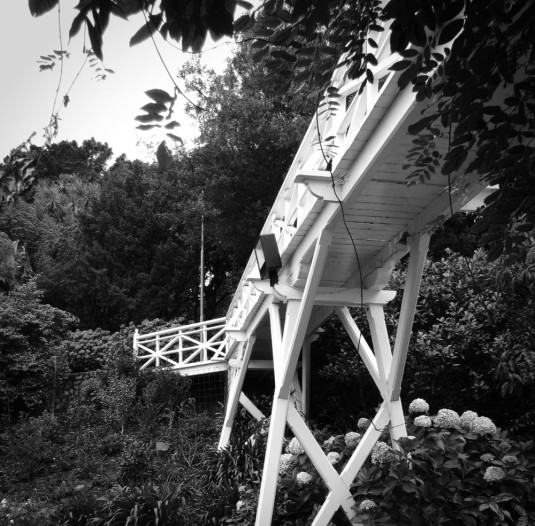 He aged, faltered, and grew misanthropic. Seeking silence and solace, he built a retreat and connected it to the house with an elaborate bridge, though only his servants were permitted across it to feed and care for him. Alone in this annex, he cut himself off from his family and the world, as the lagoons have since become severed from their harbour. No man is a (Gear) island, but wealth can buy you peninsular solitude.

The homestead’s orderly grounds perch on a steep bluff right above the motorway. I look down across seven lanes, the railway and the agitated harbour, but there’s no way down towards the highway. Instead, I follow the curving driveway to the main entrance. Across the road, Aotea College’s logo is a pātaka: like Gear’s annex, a small house kept elevated and safe from the world’s depredations. Steep banks and brick walls keep the College itself aloof from the street, while next door, blank rendered ramparts form a symbolic gateway to the nascent subdivision.

Despite these emblems of safety, seclusion and order, the landscape is still raw with transition. Veins of decay wind through the rolling topography. Gullies clogged with suburban detritus, bottles, tyres and trolleys fading into a uniform rust-brown as the pine needles build up in deep drifts. Abandoned paddocks claimed by gorse and rank grass. Magpies on the overgrown verges, hopping indignantly as they’re ruffled by impertinent gusts.

From here, the closest walkable path to State Highway 1 takes me through the grounds of Aotea Lagoon, another aquatic by-product of the motorway’s expansion. On a summer’s day this would be a suburban oasis, but in this bitter greyness the cheerful oddities of its design take on strange significance. While I won’t be in for any big surprises (a mournful sign advises “Teddy Bears Picnic Cancelled”), a dedicated earth-magic psychogeographer could write a whole book about its twisted geometries and symbolism. 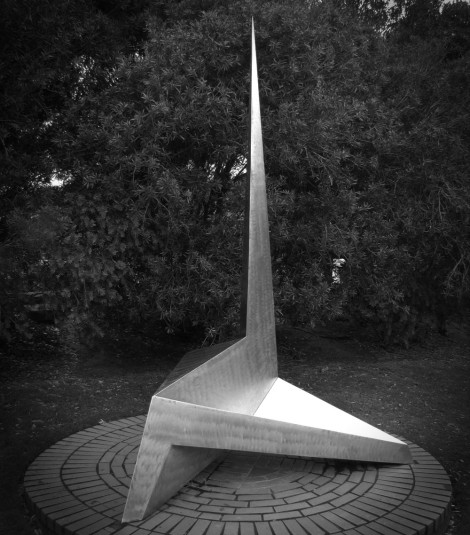 I begin to circumnavigate the lagoon, passing Guy Ngan’s crystalline spike. Forged in gleaming steel by Chubb Lock and Safe, it resembles a gnomon in search of a sundial. Indeed, it previously stood at the centre of the wheel-shaped rose garden, but was removed for unknown reasons and now stands alone, its restless angular energies forever dissipated. I want to investigate further, but a sudden shower drives me in search of shelter. I duck into the nearby fernery, and rest amid its deep green shade while I consider my next move.