Save Kate – from who?

Walking my daughter to school on Tuesday morning, I was handed a flyer on Lambton Quay – “Keep Kate!”.

As kind of a fan of the Kate Sheppard traffic lights, I took the flyer – and saw that they “were under threat of removal” with a link to a petition. I’d sign that!

But turning it over, the flyer was an advertisement for Wellington City Councillor Nicola Young.  My first thought: smart politics, Nicola, aligning yourself with such a simple, popular, liberal cause.

My second thought: she just wants our names and email addresses for her mayoral campaign mailing list. Eww. Cynical use of an issue for a clearly political purpose, I thought.

So, despite not being legit twitterati – in fact I’m a bit of a newbie and seldom tweet – I posted

“In my view, not kosher for @nmjyoung to use Kate Sheppard to build her mayoral campaign contact list”

It seemed strange to me, being well-connected in Wellington campaign-y circles, that if the lights were under threat that none of the local or Wellington women’s groups were fighting for their retention.

So my third thoughts were: are these lights actually under threat of removal?

I got on the phone to NZTA and rang media spokesperson Andy Knackstedt, asking him what was the story behind the Kate Sheppard lights. He actually laughed at the suggestion that they were under threat – said that this was not the case, and extending the initial trial was basically just a compliance issue, a matter of paperwork between Wellington City Council and NZTA.

Just rang Andy Knackstedt from NZTA. Kate Sheppard lights are not under threat and never have been @nmjyoung

“Just rang Andy Knackstedt from NZTA. Kate Sheppard lights are not under threat and never have been @nmjyoung”

Friends of mine and Twitter and Facebook then got active discouraging people from signing the petition  – that it was a ruse, that the lights were never at risk, and our data was being mined by Nicola Young for no real purpose. Nicola’s responses were mainly through a “KeepKate” twitter account, and used vaguer and vaguer language about whether the lights were actually at risk. Now, we were apparently just demonstrating to NZTA how popular they are!

NZTA then confirmed on Twitter  that they had no plans to remove the lights and that they were working with WCC on approvals. So I tweeted this image to show how Nicola Young was misleading Wellington with her sham petition 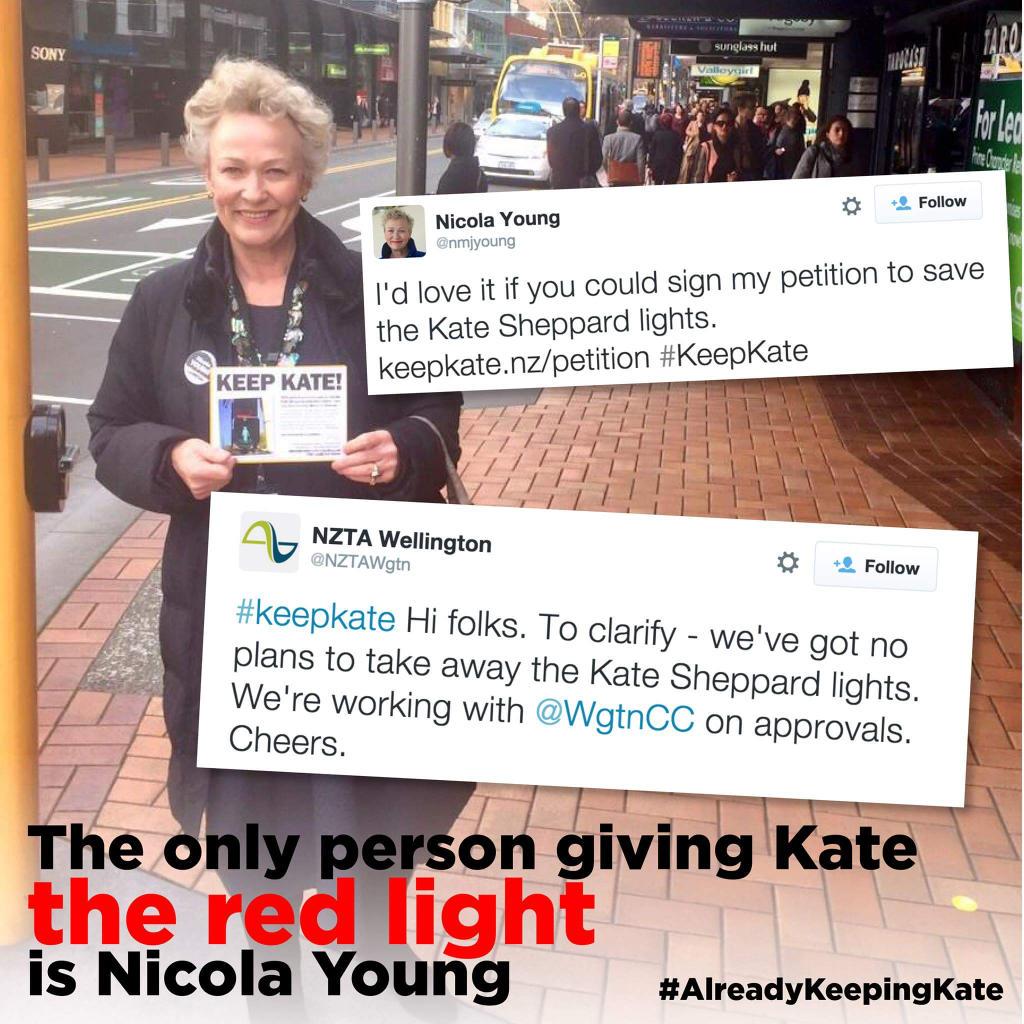 I know lots of people who try to be active and engaged in our community in Wellington city. I’m one of them. We place a level of trust in the organisations and individuals who solicit our support when we sign petitions or take other action for change.

Nicola Young, as an elected official, abused this trust by lying to Wellingtonians with her flyer and petition. We didn’t need to do a thing to keep Kate – she was staying anyway. Nicola Young just wanted to build her profile as a councillor and get our details for her campaigning mailing list.

She wasn’t fighting for our interest. She underestimated Wellingtonians – that we wouldn’t check the basic facts of her supposed campaign. I hope she’s learned not to do that again.

One of our many occasional guest writers.