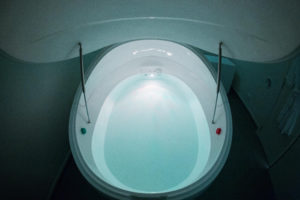 James Smith Market’s Float Well offers submersion into a space that’s been a site for relaxation, meditation, and consciousness-experimentation throughout the 20th Century. The Wellingtonista takes a dip.

In Ken Russell’s barmy 1980 sci-fi thriller Altered States, William Hurt plays a psychologist whose hunger for third-eye-candy takes him on drug trips, indigenous vision-quests, and ultimately into the pitch-black silence of a sensory-deprivation tank. Here the film — ostensibly based on real-life research — has Hurt’s character do battle with his innermost self, succumbing to the ravages of his own id. He devolves — it can’t be overstated, this film claims its origins in the reality of academically sanctioned research — into first a murderous caveman, and ultimately a raging cloud of pure malevolent electricity. Spoiler!: he throws it all away when he realises he’s heading to a state of being wherein he can’t fuck no more.

If there’s a darkness in which Russell’s film can be said to have first been birthed, it’s that of John C. Lilly’s Restricted Environmental Stimulation Technique, or R.E.S.T. tank. Lilly — whose research ran the gamut from LSD therapy to dolphin-human communication — developed the tank in the 1950s as an experiment in depriving the human brain of external stimuli. The technology has since evolved but the essential form remains the same. Today’s float-tanks, like Lilly’s, comprise a soundproof, light-tight space filled with heavily-salted, body-temperature water. Like tourists in the Dead Sea, the body can’t help but float; and in the absence of stimuli, the hope is that lying in the tank evokes a still yet deeply explorative state of mind. 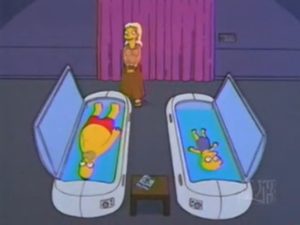 Wilfully surrendering your senses to the void evokes an uneasy fascination, and the pop-cultural presence of the R.E.S.T. looms large. The Netflix show Stranger Things has a character enter the tank to access interdimensional powers; in the ‘90s, the technology was lampooned in The Simpsons and employed in the future-fixated comic-book epic The Invisibles as a delivery mechanism for virtual reality.

Lilly’s technology also spawned consumer-level self-exploration, though. Riding the wave of the consciousness-explorative ‘60s, the tanks fell out of fashion in the later quarter of the 20th Century. In recent years the curiosity has returned alongside the renewed interest in mindfulness and meditative practise.

“Meditation is sometimes uncomfortable,” admits Samantha Rozitis, co-founder of floatation space Float Well: “your foot will fall asleep, or your back is feeling sore, or if you lie down you’ll fall asleep instead of staying alert or present. In the tank you’re trying to get into the same theta brainwave state as you reach in meditation, but it allows you to get in that state a lot quicker and stay in that state because there aren’t physical distractions. It gives you a space to relax quicker and focus.”

Rozitis and her partner, Kevin Spacey (no, obviously another one) arrived in New Zealand from Canada in 2012: she has a background in addiction counselling and yoga tuition, and he’s a structural engineer working on the Christchurch rebuild. Turned onto floatation by podcaster and fervent advocate Joe Rogan (yep, the Fear Factor guy), they saw a niche in Wellington for a dedicated, world-class floatation-space: “It’s something that we’re trying to promote more as a practise than just a bucket-list thing”. 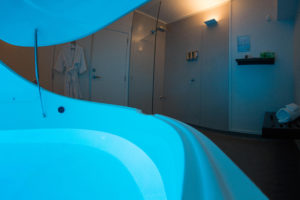 They outfitted the upstairs space in the James Smiths building with two large floatation tanks, with plans to add more; in the meantime, Float Well augments its floatation setup with massage and craniosacral therapy offerings as well.

“Most people who go into the tank are going for stress relief and relaxation,” says Rozitis: “an escape from their day-to-day lives.” But there’s another cohort as well: those who, like Altered States’ questing electric caveman, “come for the exploration of consciousness: the curiosity of the mind.”

“Because you’re weightless there’s no pressure points on the body,” explains Rozitis: “You may feel parts of the body that have been holding onto tension for years, or old injuries that have never been fully resolved, may feel tender. It’s an environment that allows you to scan through your physical body, your emotional and mental state. Every single person’s float is different.”

It’s indeed a unique sensation to submerge in the salt water, pull the lid closed, and hear the gentle sloshing gradually subside as the body finds stillness. The body generates its own sensations of movement, subconscious environments drifting to the edge of consciousness. Turn off your mind, relax and float downstream, as ‘60s pop music exhorted the first wave of salt-water pioneers.

The mind and body soon start communicating directly, with consciousness relegated to something of a bemused bystander. The head hangs heavy, jaw lolling open, eyes blinking in an attempt to distinguish closed from open. You shower thoroughly before and after floating, but the salt water bites acutely at the Muladhara and Svadhisthana chakras: a reminder that in here, the whole body’s just one big bobbing ball of sensory stimuli.

The outside world may be out of sight but it’s by no means out of mind: shallow-buried thoughts can’t help but come to the fore. It’s an environment at once outwardly relaxing and inwardly challenging, dissolving the boundary between mental thoughts and bodily tensions. Time passes quickly, and it can be hard to believe a physical journey hasn’t taken place.

Most people start out with a one-off hour-long float, but some of Float Well’s dedicated explorers prefer to submerge for up to three hours. This is a journey as deep as you’re willing to go, and you may not get far the first time. But the physical sense of calm afterwards, the soundness of that night’s sleep, are undeniable.