The New Zealand Architecture Awards were announced today, and while there are few Wellington projects on the list, one prominent development stands out. Zavos Corner by Parsonson Architects Ltd, a low-rise apartment complex on the corner of Pirie and Brougham streets in Mt Victoria, won the Sir Ian Athfield Award for Housing.

The judges praised it as “particularly gratifying when this country is in such need of quality multi-unit housing. Architect and client are to be congratulated for so convincingly transcending the norms of medium-density housing and setting a benchmark for this type of building.” But it wasn’t an easy path to get there. Mt Victoria has some very characterful and attractive streetscapes, and these are quite rightly protected in the District Plan. Intensification this close to the city is welcome, but difficult to do well while still retaining the characteristics that make the neighbourhood special.

When this was first proposed, I was in the slightly fraught position of being the Wellington City Council urban designer who had to assess how well it met the design guides. Those guidelines are quite prescriptive, which can be helpful when dealing with clueless or unscrupulous developers, but they make it hard when you’re faced with a creative response to an unusual site. A single narrow site in the middle of a street of identical villas would usually call for a reasonably strict adherence to the forms, massing and material palette of its neighbours, so that the parts can still add up to a coherent whole. But an elevated corner site that’s on a major route into the city, adjacent to modernist apartments, and just up the road from industrial and commercial buildings, can handle a much bolder approach. Which is exactly what Gerald Parsonson delivered.

Of course, no architecture, no matter how inventive, should ignore its context. What this design does is take references from the roof pitches, scale, materials and proportions of the wider neighbourhood and reconfigure them in a creative way to create a dramatic yet considered response to the site. In the way that in music, harmony is different from unison, it doesn’t echo its built context but engages it in a lively conversation.

Of course, this didn’t go down quite so well with the neighbours, who said it would “clash with the weatherboard Victoriana theme of the neighbourhood” (yes, they actually said “Victoriana”). But respect for the nuances of traditional architecture may not have been their only concern. The NZIA judges mentioned that “the project is a strong addition to its street, an impressive presence in its neighbourhood, and a fine home to a community of appreciative tenants,” and I suspect that the final word is part of their problem: “tenants”. I heard several comments in the hearings about potential residents not being “the right type” for Mt Victoria: non-home-owners (even in a clearly upmarket development) are considered to bring the neighbourhood down.

The Residents’ Association’s naked NIMBYism is even more explicit about the motivation behind their objections. Praising mostly strict interpretations of character restrictions, they said “prices have soared as house owners have lost the fear that something inappropriate could be built beside their refurbished classic house. (From the Brougham Street corner you can see 33 houses valued over $1m)”. Many of us would consider that such house price rises are unsustainable (bordering on obscene), and that building eight relatively inexpensive two-bedroom homes just one block from the central city would be a good thing for affordability and walkability, but a certain type of resident is more interested in clutching on to their soaring capital gains.

Not everything is perfect. The clock tower may have been a good tectonic move, bringing visual strength and cohesion to the important corner, but the actual clock has ended up underwhelmingly small. Perhaps the original clock design ran afoul of Council signage regulations! Some of the other positive aspects came about because there were ways around other District Plan provisions. For instance, the residential parking provisions (one per unit, plus visitor parking once over a certain size) usually makes the ground level of townhouse developments a poor compromise between vehicles and outdoor space. In this case, the topography and budget allowed for underground parking, leaving the ground plane free for a sheltered courtyard. I particularly liked that the landscape plan included both native planting and species from Greece, acknowledging both the natural heritage of Tangi Te Keo and the post-war cultural heritage of Mt Victoria. 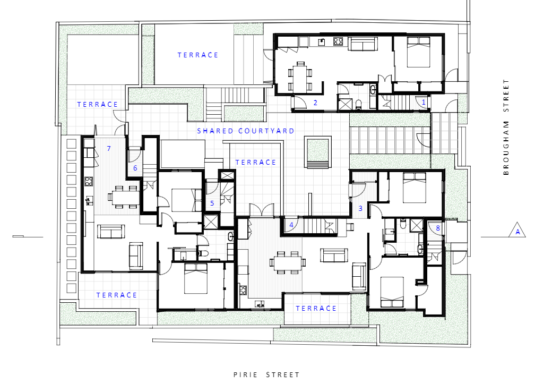 There were plenty of headaches trying to get outdoor areas to meet the District Plan requirements for space, access and sunshine, which the architects managed to resolve in a pragmatic way. Living quality is important, but many of these rules, like the parking ones, make no distinction between small flats on the edge of the CBD and 5-bedroom family houses on the outskirts of Churton Park. Wellington needs to provide more homes in the right places, and the rules will need more flexibility to allow for these cases. But in this case I’m glad that Parsonson’s team persisted through the tortuous process: the result is a win not just for them, but for the city.