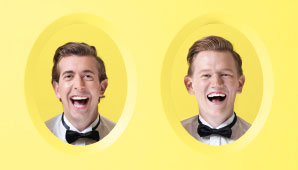 Hudson & Halls Live!‘s Wellington season at the Hannah Playhouse began with an usher  welcoming crowds to the performance, assuring them the theatre had been certified quake-safe, and explaining that some years after the time in which the play was set, one of the protagonists would die of cancer and the other would take his own life.

It’s an odd way to begin a show distinguished beginning to end by a joyous, upbeat chaos of living. The play conjures the daggy semi-professionalism of 1980s NZ studio tv to retell the onscreen love affair of chefs Peter Hudson and David Halls. The pair’s slapstick celebration of kiwi-kitchen haute cuisine invigorated the airwaves and breathed helium into the staid tv cooking-show milieu.

Invoking its era frequently, the show’s shameless delight in nostalgia plays well into the campy verve of its protagonists. The Wellingtonista is (tonight) young enough not to have been familiar with Hudson and Halls’ real-life schtick; but the gusto with which the duo — bitchy, bickering, frequently sozzled — forced sophistication into the microwaves of middle New Zealand isn’t understated onstage.

Hudson and Halls’ obvious romantic love for one another was, perhaps surprisingly, not a problem for their adoring mainstream audience; at halftime, the couple beside The W wondered aloud whether, Queer Eye-style, Hudson and Halls’ homosexuality onscreen was accepted so far as it was shown in a sufficiently self-lampooning context. (This in turn plays into the oft-lamented tendency for queer characters onscreen to meet with tragic fates). Hudson & Halls Live!‘s deft answer to this is to punctuate the onscreen shenanigans with behind-the-scenes interludes hinting at the limitations placed upon the duo by their era.