Review: The Elixir of Love 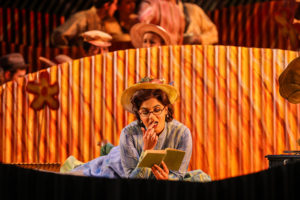 Though my companion and I were likely the youngest and the poorest in the audience (opera continues to be an art form seemingly granted to those above a certain age), it was a show that could be enjoyed by all.

This opera is a tale for the ages. Our hero, Nemorino, is desperately in love with the beautiful Adina, but she can’t find time for him and instead decides to wed Belcore, a ridiculous English officer. However, Nemorino buys a ‘love potion’ off snake-oil salesman Dulcamara and is sure that that will change Adina’s heart. Over a ridiculous two and a half hours, the pair fall in love and discover that although the ‘potion’ may not be real, their love and the drink’s great taste and flavour certainly is. 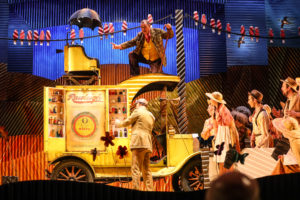 One part I especially loved about this opera was the incredible commitment to the aesthetic. It’s set (somewhat) in early Australia, and the set, costumes and overall production design was utterly gorgeous and groundbreaking.

Director Simon Phillips writes, “My instinct is always to bring something as close to home as the scenario will allow. This (Australian) setting allowed me and my designers to draw on some of the aesthetics of both the real Australian landscape and its depiction in art. As you can see in the photos above, the use of corrugated iron – or something similar – runs throughout the entirety of the show, within the set, the horses (!!!) and other physical elements. It’s a brilliant and innovative way to set us, as audience members, within the scene.

Having never been to the opera before, I wasn’t quite sure what to expect. The entire piece was in Italian (Gaetano Donizetti’s L’elisir d’amore) and an English translation was played on a screen to the side of the stage. As this opera was set in Australia, it was quite the unique translation, indeed – never have I ever seen the word ‘bonza’ used in a sentence before, and I don’t think I ever will again.

The entire opera was performed beautifully. An aria I especially loved was Come Paride vezzoso, performed by Belcore, where he tries to woo Adina, hilariously, and she rebukes his advances. Belcore is a weird character anyway, quite bighead and rather ridiculous, and I found him to be a lot of fun.

Although initially I did feel like I wouldn’t quite fit within the world of this different art form, at the end I felt welcomed in with open arms. There is something to be said about letting go of preconceived notions around certain things, and I did have a hilarious time in the end.

The entire work was utterly witty and charming and definitely worth seeing live on stage.

Take a chance, have a gamble, I’m sure you’ll have a very good time.

The Elixir of Love is being performed at Wellington’s Opera House on the 26th, 28th and 30th of June. A wide range of tickets are available here.

Show is performed in Italian with English subtitles.