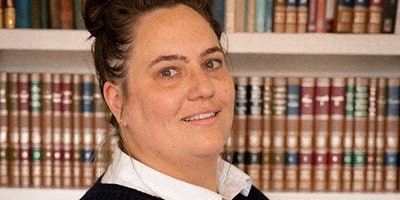 It’s quite hard to write a review for a comedy show that has a medium to large bombshell admission in the middle that changes the context of all the jokes told thus far, but I’ll try my best because Alice Snedden’s Absolute Monster was great.

I’ve been a long time fan of Alice’s mainly through her podcast with Rose Matafeo, and her iconic web series Bad News (with the classic ep where she essentially captures Don Brash admitting he’s a white supremacist). Part of me was worried about being familiar with a lot of the jokes as I have been listening to her stories and her work shopping jokes for years. However what started off as a familiar but still enjoyable jaunt through her confidence, wit and irreverence was turned on its head in a way that was unexpected, challenging and, at times, tongue and cheek in the most delightful way.

Her admission, which again I will keep under wraps, was one of those moments of vulnerability that was delivered with such ease and confidence that it’s not till later that you come to grasp the depth of what was being tackled.

Aside from the vulnerability she wove into this show, Alice’s confidence and strong sense of self worth are presented in the funniest way- with no sheepishness. Instead the first half of the show was an honest admission that she really did think she was amazing and essentially good, at least up until recently. Even with her exploration of her moral flaws Alice did not fall into traps of unnecessary self-flagellation or shame that would’ve made everything a lot less funny.

Alice Snedden is not only an ex-lawyer who LIVED IN NEW YORK, she is a comedian with a heart at the peak of her powers – what more do you need to entice you?

Absolute Monster is being performed at the Fringe Bar in Wellington from now until Saturday. Get your tickets here.