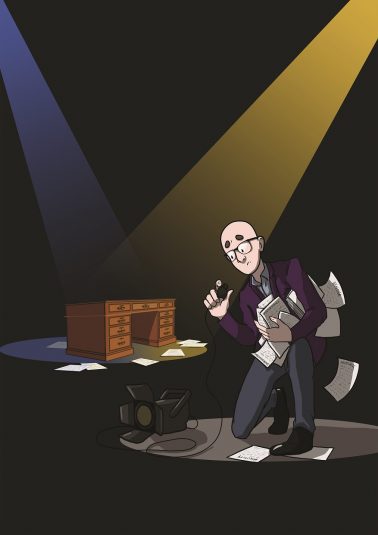 It was weird for me to go to a show at 93 Kelburn Parade, having completed my own humble BA at Vic almost 20 years ago.  In fact, #93 was the site of at least one audition and more than a few rehearsals for me.  It’s had a bit of a facelift, now being an actual little blackbox theatre rather than just a big room, but the smell was the same, as was the uncomfortable heat generated by many bodies.  It was nostalgic to be crammed together with a bunch of students, and to add insult to injury, we were all given a reading on decolonisation to do before the show, which was completely impenetrable (at least to me).

James Wenley, or should I say Dr Wenley, is a dramaturge and lecturer at Victoria University.  He was inspired to write a show of his own while on a research trip to the famed Edinburgh Fringe.  The inspiration became a compulsion and the show was written at the same beautiful desk at which he completed his PhD, the same beautiful desk that shares the stage with him.  The themes are, sort of, performance, masculinity, whiteness and privilege.  But the driving theme that struck me was a rather sweet and awkward search for approval, in a world where being a tall white educated cis man gives you an automatic advantage, and a platform.  He asked us and himself, should he have made the show?    Is it right to use a platform others have to struggle to reach to discuss the injustice of their struggle?

Wenley is clearly a brilliant lecturer.  He easily engaged the audience, owned the space, and spoke articulately and persuasively about performance, privilege, and his journey.  He danced, he stripped, he used a projector, live video feed, and a mic to argue against his own commentary.  It was all very polished, and extremely self-deprecating.  He knows all the devices and artifices performance uses to make a point, and he adeptly used them all, while simultaneously explaining how those devices served to manipulate us.  Clever, and fun to watch.  And Respect – he worked his ass off.

Wenley told stories about himself, his family, his experiences, all in the perfectly enunciated and projected tones of a Theatre Person.  Don’t @ me; I do it too.  As the show progressed, it evolved into something darker; an interrogation of his motives and his right to the stage.  Very valid questions, and very complex, and Wenley articulated them with grace and honesty.

There was still that awkwardness, though…  I think because with all the questions Wenley was asking us, and asking himself, there are no answers you can really unpack in an hour and a half.  Rather like a lecture, we left thoughtful, wondering how to justly use the space we’ve been given.  I left wondering why all the reviewers I’ve met are white, most of them older, and mostly dudes.  Are our opinions so important that we feel we should generously share them with everyone?  It’s a little shaming.

Everyone has a show in them.  And everyone has the right to produce it.  And with this show, I think Wenley was absolutely using his powers for good…  he made us think about what we’ve been given that we did not earn.  We don’t have to abdicate our platform, but can we shuffle over a bit and share it with someone in greater need of amplification?

Dr Drama Makes a Show was frenetic, earnest, and very well-meaning.  It did not solve all the problems in the world, but it started a dialogue.  I think Dr Wenley should be bloody proud of that.  And also provide a reading list, please.