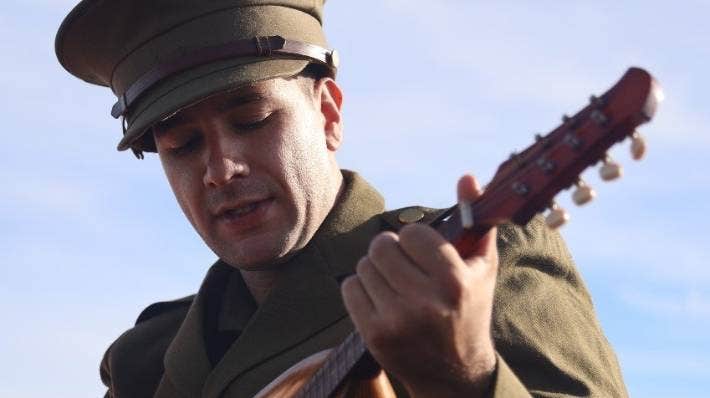 There’s something so delightful about going into a theatre show completely blind. I knew nothing about this play, had read nothing about it, all I knew was the charming aesthetic of the publicity photos and the fact that this was a New Zealand premiere.

Captain Corelli’s Mandolin is a true telling of the perpetuity of love amongst terrible strife, but it’s so much more than that. Over two hours a very varied cast invite us into the lives of those living on the island of Kefalonia during its Italian and German occupation in the Second World War.

On the island, Pelagia (Ava Wiszniewska) and Mandras (Richard Corney) are in love, until the the war drags Mandras away. Italian soldier Carlo (Rio Futschek Ryan) has a deep desire for his fellow soldier Francesco (Finnian Nacey), while the war rages on and they’re forced to fight. As the Italians occupy Kefalonia, Pelagia finds her eye caught by the eponymous Captain Corelli (Jonny Marshall), who brings a bit of musical light to the war-scarred land.

Captain Corelli’s Mandolin is brought to life by its powerful directing. Directors Ewen Coleman and Stanford Reynolds create gorgeous stage pictures within this piece, helped along significantly by the excellent lighting (Devon Heaphy) and sound design (Tommy Joass), immersing us thoroughly in the world of Kefalonia. A scene where Mandras, trapped in the endless nightmare of war, walks through a red-illuminated battlefield, sticks particularly in my mind – excellently designed, scored and performed by all.

The cast brings strong performances to the table, from a wide variety of actors, a significant bunch of whom are still at high school. Wiszniewska gives Pelagia a stubborn fieriness that lends itself very well to the character, Corney jumps between man in love to man scarred with great talent, and Marshall, I’m sure, has all of us nearly falling in love with him by the end.

Alister Williams plays Iannis, Pelagia’s father, with a lovely grounding, speaking a lot of wider truth to the audience in a way that never feels forced or overtly expositional. I’d like to also make mention of the animal roles in the play – the Goat (Georgia Davenport) and Psipsina (Gilbert Levack) – who are delightful to watch – the two actors have stunning commitment and bring excellent physicality to their performances.

A script that is in four languages (English, Italian, Greek and German) is never easy, but for the most part the cast takes to it with aplomb, settling us right within the bounds of Kefalonia in a way that feels natural. The fabulous singing, live music on stage and set design all add to the feeling of the world, and it would be a much less life-filled show without it. The excellent ensemble cast helps the work along too, acting adaptably as townspeople, soldiers and dolphins when the need arises.

Captain Corelli’s Mandolin is a play about love in all its forms, and it shines its best when that tenderness is brought to the crowd. Though I believe that perhaps the play suffers a little in its under-portrayal of the darker parts of the script, the joy and life running throughout the rest is heartfelt and equally heartwarming.

I really liked it. I think you will too.

Captain Corelli’s Mandolin is being performed at the Gryphon Theatre in Wellington until the 10th of April. There are only a handful of tickets left for the entire season, so snap them up here.

Theatre
#Gryphon theatre, #wellington rep
Previous Post
A Quick and Dirty Look at the Comedy Fest!
Next Post
Review: The Look Of Love