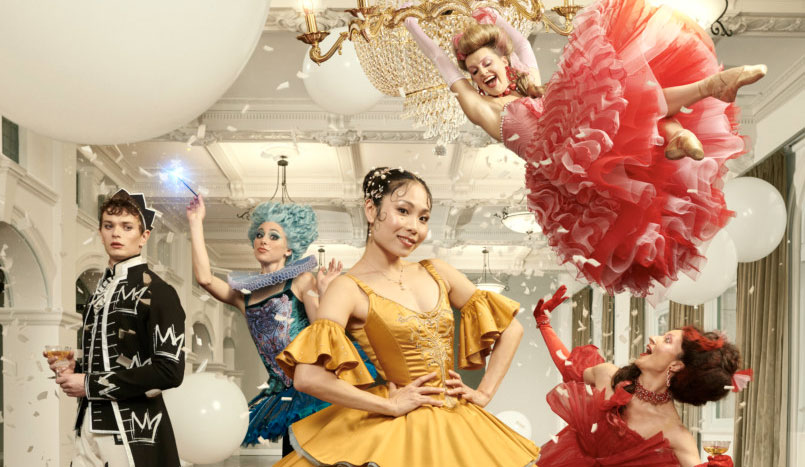 RNZB’s Cinderella is a carnival of excess, packed full of joy and beauty and delight. It shines with queerness, and as a queer dancer myself, this ballet was a revolutionary take on a well-hewn story and hit me right in the chest.

Cinderella (Mayu Tanigaito) is the same woman we all know, stuck in a house with her evil stepmother and stepsisters, but this time, she doesn’t fall in love with Prince Charming (Joshua Guillemot-Rodgerson), but rather his Royal Messenger (Laurynas Vėjalis). Charming, however, doesn’t seem all that interested in women, and finds his love in Prince Dashing (Shae Berney) a prince from another kingdom. The story, at least somehow in the way we know, blossoms from there.

Ballet, like a lot of forms of dance with partners, tends to fall into strict gender roles. Recently, we’ve seen big dance competitions like Dancing With the Stars break the mould and allow same-sex partnerships, and in Wellington we’ve seen School for Gifted Children’s The Slutcracker and Sapphic Lake.

However, it is huge for a company such as the RNZB to allow for such a new retelling of Cinderella – where queerness is celebrated and heteronormativity need not apply – and honestly, rather brave. It can be very simple to take the easy road, but no-one is immune to criticism, no matter how big the company might be, and it’s a great step for a show like this to be performed in one of Wellington’s biggest venues, to near sold-out audiences, who clap and cheer at the queer moments, rather than boo.

Loughlan Prior’s choreography for this work ranges from traditional ballet (both partnered and not), through club dance, modern dance and even voguing. Did I ever think I’d see the caterpillar on an RNZB stage? No, but in Cinderella, there it is. The freshness of the choreo simply adds another layer to the delight of the world. The fabled ball Cinderella attends is less ballroom, more hazy 3am club, and honestly – it works.

In a more traditionalist retelling, perhaps it wouldn’t, but I laugh and cheer along with the rest of the audience as Prince Charming’s ball starts out as a parade of “eligible maidens” being shown to the Prince, all dressed in formal wear and dancing with much poise; then descends rather swiftly into the bass-drop alcohol-fueled dance chaos of a good night out.

The choreography was brilliant overall, but here’s a few moments I especially loved – obviously actualised by a team of incredible and proficient RNZB dancers. Prince Charming dancing with his fencing team, complete with épées and actual swordfighting (choreo’d by Simon Mann) was incredible to watch, and I don’t doubt a challenge to block with swords in hand. All of the moments between Cinderella and the Royal Messenger had a beautiful liquid sensuality and genuine intimacy to them; and the Evil Stepsisters Madelaine (Sara Garbowski) and Nicolette (Kirby Selchow) were genuinely hilarious, oftentimes parodying certain other ballets we know well, but with a comical flair.

My favourite moments, however, were how Prior approached the dance scenes between the queer couple – Princes Charming and Dashing. It can be so easy to queer a show by simply having a person of the same gender take on the opposite gender role in a heterosexual couple (ie: one person “plays the girl”, complete with a faux-feminine vibe that somehow exists to undermine the queerness of the moment), and I’ve definitely seen it done in queered dance before.

However, in Cinderella, Charming and Dashing share the stage equally, and hold equal footing. Their dances are undeniably masculine, but they share the lifts, the grapples and the holds – they’re balanced, rather than off-kilter, a little rough around the edges but unmistakably beautiful. These moments were very precious, and held a lot of the honesty in the show for me.

It is that sense of balance that underscores the entirety of the show. Cinderella doesn’t need to be saved in this work, and has her own footing. She doesn’t exist just to be wooed, and that’s so, so refreshing. She even gets a swordfighting scene of her own. The strength and grace in Tanigaito’s performance is lovely – she’s always a delight to see on stage.

I can’t talk about everything for fear of spoilers, but let me say, there were some wonderful new additions to this piece that I didn’t expect, and will particularly resonate with some of you who enjoyed a certain queer Netflix series a few years back.

Claire Cowan is back as the composer of this show. I absolutely adored her work in the RNZB’s past work Hansel and Gretel, and thoroughly enjoyed her compositions in Cinderella. Ranging from more traditional classical pieces, through EDM, techno and the occasional polka and tango, this is a soundtrack that’ll stick with you. (I’m writing this review the morning after I saw the show, and believe me, I was dreaming some of the soundtrack last night). The collision of genres really adds to the overall feel of the piece – this show wanders through time and space in a way that’s gorgeous, and the music is the guide that leads us on our way. Major props to the orchestra as well, this is a spicy show with a lot of fun to it, and they absolutely brought the energy.

Cinderella is beautiful chaos. From the grace and professionality of the dancers, to the shine of the set, the costumes and the digital projection, time and effort has clearly been put into making this piece revolutionary. Art brings joy to desperate times, and right now, when queer folk are in such strife in many places across the world and discord is flaring up about our sheer right to exist, Cinderella is the balm that we all need. It is a celebration of love, euphoria, and endless queer joy, and I certainly felt that last night.

Besties, I am positively shooketh. Take your friends, take your lovers. This is one you’ve gotta see.