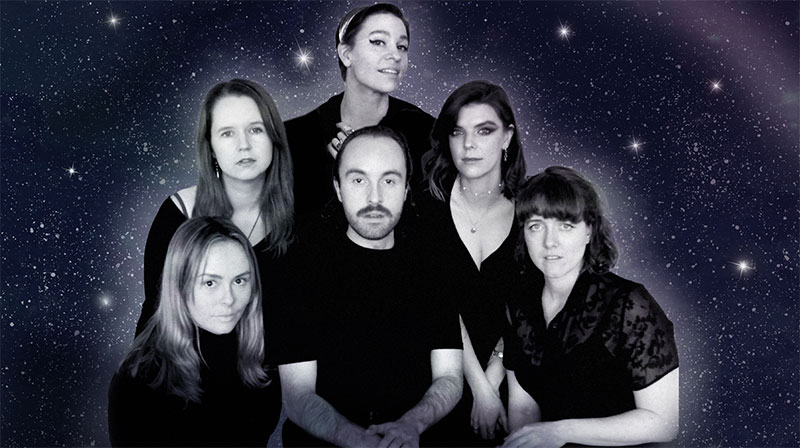 Before I even start this review, let me just stress how well the cast of Celestial Nobodies performed under pressure last night, the audience space was quite challenging for multiple reasons and they held the show well with composure and poise – no mean feat considering it was opening night as well!

Celestial Nobodies sold out during the 2021 Fringe Festival and is back reskinned at BATS Theatre this week with a slightly smaller cast and presumably some other differences behind the scenes. It’s a polylogue show, where the planets are personified, and has a fascinating discussion of queerness and humanity underscoring the entire piece.

Mercury’s (Annica Lewis) is telling their boss that they need a break, Earth (Lilli Margaret) and Moon (Lewis) are codependent in an unhealthy way and Jupiter (Q Walker) really needs their kids (other moons) to just calm down for a moment, okay? Uranus (Laurel Mitchell) has Trauma, with a capital T, The Sun’s (Nick Erasmuson as Eva Goodcoq) singing songs and Venus (El Yule) needs people to stop looking at them.

It is a particularly novel idea to personify the planets, but a wholly clever one. There’s not a lot of shows where you can see wonderful human performances and learn about the planets at the same time, and I congratulate playwright Evangelina Telfar on her depth of research. The part of me that wanted to be an astronaut for most of my childhood is very tickled by this show. Telfar’s writing is zingy, full of puns and delight, but isn’t afraid to delve deeper into the more heavier issues – at points the show dips into discussions about queerness, domestic abuse and mental health.

Anastasia Matteini-Roberts directed the Fringe version of this show and is back for this iteration. Her strong directorial vision is quite apparent and lends itself to the show in a very good way. Tonally, the show goes through multiple different themes across just over an hour, each handled carefully and differently, with characters embracing the fullness of the stage during direct audience address.

“Enjoyed” isn’t particularly the right term, but a moment I felt particularly heavily during this work was Earth’s scene. The monologue is grounded but not particularly emotional, the toneless ache of a character in crisis. It can be easy to overact scenes around depression and mental illness, but I found Lilli Margaret’s performance to be utterly compelling and very realistic. Annica Lewis’ Moon, when she joins the scene, is more eager-to-please and emotional, and together the performers make quite the pair, creating a moment of desperate, misplaced intimacy that is both wholly toxic but utterly resonant. It’s a moment I’ll be thinking about for a while, I reckon.

Other moments I found particularly rich within the show were Saturn (Q Walker), a partier at the end of their night discovering things about themselves – a dizzying fumble with identity that I know all too well; Venus (El Yule) and their battle with the voyeuristic desires of others juxtapositioned against a clothes-changing scene; and Uranus (Laurel Mitchell), a stand-up comic going wildly off the rails.

Crew-wise, the entire production is studded with a ton of local talent. Anne-Lisa Noordover’s set is simplistic but gorgeous, with fluffy clouds and glitter that seem to warm the space immediately. Simplistic but lovely sound design (Phil Brownlee) and lighting design (Bekky Boyce) add to the overall feel, creating a space on stage that feels welcoming, and serves its purpose to elevate the performers, rather than distract from them. The room feels nice, actually. Despite the heaviness of some of the monologues, it is good to come into a place where the staging, performances and scripting is so utterly queer.

Celestial Nobodies is a play with a lot of heart at its core. Ideally, I think the work would have benefited from a slightly truncated script, and more of an overall conclusion, but overall, it’s a play that takes the audience places, and leaves a lot of heart in its wake. At points, it’s simply out of this world (sorry, I couldn’t resist.)

This show is on at BATS Theatre in Wellington until the 13th of August. Get your tickets here.