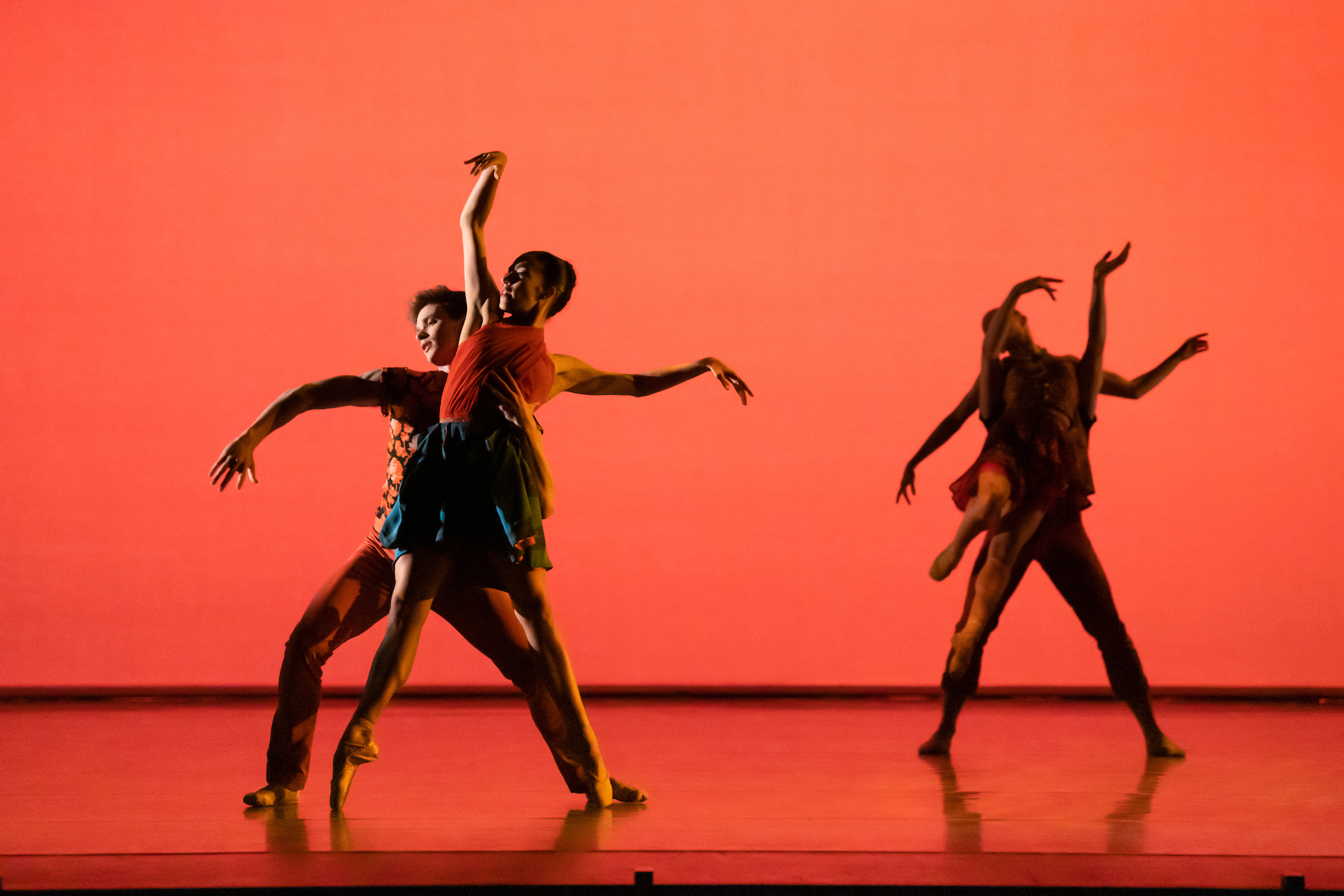 The Royal New Zealand Ballet is back for their final offering this year, a trio of celestial ballets within the show Venus Rising. I’ve been waiting to see this show for a couple of years now, for it’s been delayed twice by COVID, so it was an absolute delight to finally catch it at its opening night last night.

All choreographed by women, the three ballets within Venus Rising are Aurum (choregraphed by Alice Topp), The Autumn Ball (Sarah Foster-Sproull) and Waterbaby Bagatelles™ (Twyla Tharp), which each run at about half an hour. All three are utterly different, but each feature an RNZB ensemble.

Aurum opens the piece. Based around the principle of kintsugi, [a Japanese art technique where broken pottery is repaired with gold – philosophically highlighting and making the cracks and life of the piece important] this work is an intimate partnered dance with heavy emotive moments, inspiring notes of contemporary dance. The dancers grip, hold, and balance with each other. Golden light reflects off bare skin. They inhale, and so do we.

Deeply powerful, Aurum is a showcase in strength and balance, of the true lengths our bodies can go when given the chance. I also see it as an exercise in trust; as the dancers are lifted and held in gravity-defying balances. Everyone has their own cracks, and everyone relies on others – it is those cracks and our enduring strength that makes our stories worth telling.

Underscored by intermingled violin and piano pieces by my favourite composer, Ludovico Einaudi, Aurum is wholly beautiful and quite moving. While it is perhaps a downbeat to open a show, it is one that inspires thought and in some moments, sheer awe.

The Autumn Ball dances to an entirely different beat. The thunderous, heavy music gives the piece a more modern edge, and a challenge is set. The performers are dressed in bright, sometimes-70s-style costumes, and initially split along gender lines as they seem to challenge each other to Shark-vs-Jet-like duels.

As the piece goes on, the groups homogenise, and the dance gets more frenetic. Gender roles are washed away as the groups move together, with same-sex pairings dancing together (something, as a queer dancer myself, I really, really want to see more of in ballet). We see notes of club dancing, hip thrusts and lighter moments, until we’re drawn through to the climax of the piece, where autumn leaves (confetti) fall from the ceiling and the dancers move together underneath.

The autumn queen finishes the piece alone, and we are left to relish in the beauty of the scene. While I wouldn’t quite describe this piece as joyful, the palpable flirtation and tension underneath is very compelling, with a warmer brightness from the previous work.

We conclude the night with Waterbaby Bagatelles™ – a work that was first performed in 1994! A dance piece full of silliness and joy, this ballet features the largest cast so far, all wearing costumes in shades of blue, some that even resemble old timey ballet costumes. Some of the dancers are even dressed in what looks like velvet – at least from where I’m sitting.

The heavy fluorescent lighting above gives the aura of a public pool, as so does the music – bubbling and foaming, sometimes dissonant pieces. The dance in this ballet resembles closest to what we know as ‘traditional ballet’, with more structured movements and staging than the other two works – this juxtaposition against the ridiculous feel of the piece (I mean that in a very good way). It is a very springy, airy piece, with lots of lifts and jumps.

This structured movement breaks about halfway through the piece into a hilarious moment where the men in the ensemble show off to a group of the women – dancing, showing off, absolutely strutting their stuff, before it resolves, the groups forming together once more, like schools of fish.

Venus Rising contains three very unique ballets, all with equally gorgeous, resonant moments. It’s a performance that will have something for everyone, and that makes it an utterly great night out. I’m utterly pleased that the RNZB finally got to stage this work.