A quiet night in the suburbs

Spotted at the Railway Station is this hilarious anti-graffiti ad: 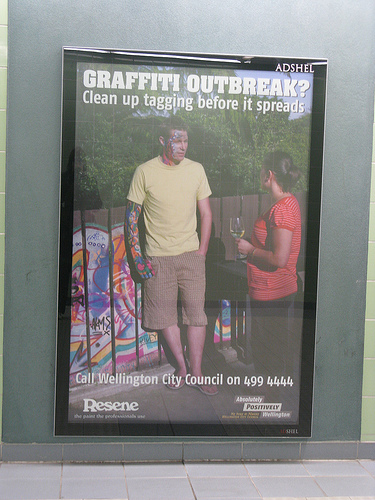 Find out what this nice young suburban couple are up to after the jump.

So there they are, a nice young suburban couple relaxing out on their deck. She’s got a glass of white wine, he’s got his hand down his pants, and you just know there’s a barbecue around the corner.

On the back of the deck is a colourful mural, probably painted by a local bunch of street kids in an initiative to get youth off the streets. Ka pai! Someone isn’t afraid to have street art in their suburban home. Perhaps this is what’s attracted the woman to the man. Maybe after another wine she might be so taken with his altruistic heart that she’ll snog him.

But what’s this? Not only is there a street art mural on the deck, but the fellow has also had some graffiti-style body paint drawn on his face and arm. Once the sun goes down, he’ll probably turn on a black light, take off his clothes and do some interpretive glow-in-the-dark dance. By this stage, the woman will have had three wines and will be ready to rip off her red stripy top and join him.

Wait, this seems like a fun evening. Why do the council want to stop this?