Everyone knows that while Wellington has a world-class, award-winning film production industry, it’s been sorely lacking one serious thing: a giant sign proclaiming WELLYWOOD.

Well, our prayers have been answered! By June a giant WELLYWOOD sign will be erected in the hills of Miramar, and will serve as a visual distraction for passengers suffering a bumpy approach to the airport.

"The sign will be one of the first things people will see when they arrive in Wellington. They will be left in no doubt that this is the heart and soul of New Zealand’s film industry."

Unless you make the approach from the Lyall Bay end of the runway. In which case, you will be left thinking you’ve just arrived in Wellington, not the world centre of the film-making universe.

Oh, I suppose I shouldn’t mock it. After all, the Hollywood sign turned that small Los Angeles village into a film-making centre second only to Wellington.

And, to be fair, it’s a little embarassing that Mosgiel has a giant sign in the hills but Wellington doesn’t yet. 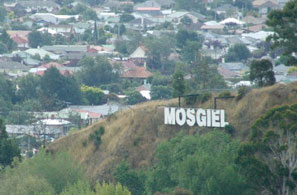