I weave through concrete islands and metal barriers to the edge of the Basin Reserve. Just inside the fence is a monument to William Wakefield: as an abduction accomplice, mercenary, principled duelist and city father, he was the marginally more respectable of the Wakefield boys. The memorial is supposed to suggest a Grecian temple, but on a shrunken scale, and the geometry could just as well evoke rural water towers or alien octopodes. Far from symbolising timeless dignity, its history is as dubious and peripatetic as its namesake. After shipping out from the mother country, it languished for decades in the corporation yard before its first installation, and has continued to shift in and out of the grounds ever since. 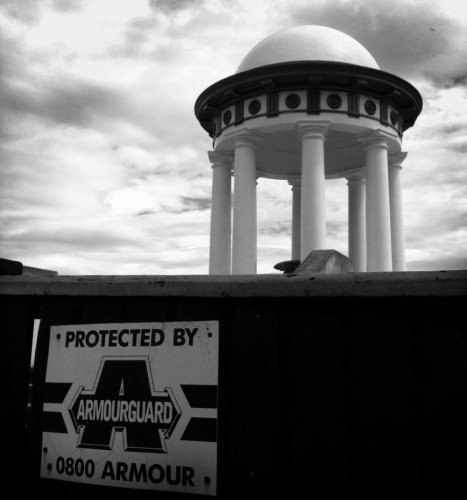 The Basin itself is a site of compromise and thwarted ambitions. The 1855 earthquake kaiboshed any hopes of a grand inland harbour surrounded by docks and factories, and ever since the Mt Cook convicts drained the remnant swamps and and flattened them into playing fields, the reserve has been subjected to shrinking and nibbling, as the noble ideals of civic recreation adjust to the demands of movement. The sharp edges have been shaved off, first to suit the turning radii of trams, then to appease the ever-hungry highway that now encircles it in an asphalt tourniquet.

The changes have not all been smooth, and the Basin has seen its share of revolt. The grounds were stormed by unionists during the Great Strike of 1913, making it a brief symbolic centre for resistance — in a away, the wharves did come to the Basin for a while. Side-street graffiti continues the struggle, though the words seem more strident than effectual: POWER CORRUPTS! SOD THE STREETS! CAPITALISM CANNOT LAST. Is the barren site behind, earmarked for a brand new supermarket, a sign of capitalism’s fatal stumble? Or is the great weary beast just taking a breather before getting back to its feet and back into trampling mode? 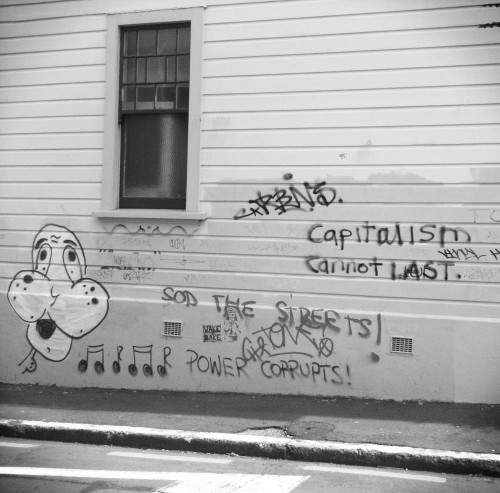 The road keeps snaking on, leaving an awkward geometry of concave triangles and apologetic landscaping. Among the fumes, the sticky, shimmering asphalt and the brazen architectural mediocrity of motels and hostels, a small crenellated building strikes an anomalous note of embattled whimsy. The defensive architecture seems at odds with its history as Mother Aubert’s Home of Compassion, but perhaps it will indeed have to dig itself in for another siege. While NZTA are tight-lipped about current flyover options, it seems likely that this bijoux castle will be (literally) in the road. As St Pat’s college got the elbow in the 60s, exiled to Kilbirnie to make way for a stillborn motorway, perhaps this last remnant will also be shoved aside. With its context so mutable, what’s to keep it rooted to this particular piece of earth?

Buckle St unbuckles, straightens, and brings itself to a stop at the Tory St intersection. This is the first intersection of the journey that retains the geometry of William Mein Smith’s original town plan: since the tunnel, every other corner has been tweaked and twisted to unkink the highway. Now I’m standing at the edge of the Te Aro grid, the rectilinear order that marks the beginning of the true city. A grid plan is at the heart of most planned cities, not just from the rationalist Greeks and Romans to the speculative subdividers of the New World, but in Babylon, China and ancient Mexico as well. Occult psychogeographers scour maps for earth magic, ley lines and cabbalistic alignments; mediaeval towns reveal traces of old grazing paths and hilltop defences; but for planned settlements on flat land, the geometric DNA of the future city is most often conceived by a surveyor with a set square.

Perhaps there’s more to it. A grid is a given, but why this alignment? North-south streets don’t quite run north to south, and the shadows in the west-east streets often catch you unaware when the sun sets further south than you’d imagine. For Mein Smith, crouched in his leaky hut, trying to cram the mandated town acres onto a confined and folded land, certain features must have set the ground rules. To the west, the base of the Terrace escarpment running north to Clay Point; high to the east, the long ridge of Tangi Te Keo; Waitangi Stream running from Newtown to the sea along the line of what was to become Cambridge and Kent Terraces. Once the y-axis was set, the rest of the grid fell into place. But what created that arrangement of parallel geologies? As usual, the answer is seismic: a series of small, inactive faults run across Te Aro, parallel to what are now the major streets between Willis St and Kent Tce. Who needs the imagined forces of ley lines, when we have the very real force of fault lines defining the skeleton of the city?

Another fault now defines the east-west alignments — tensions compounding over decades — with signs that the pent-up energy is finally ready to burst: the highway. The north edge of Buckle St now bristles with sheds, machinery, heavy metal fences. The earthmoving is about to begin, attempting to bring at least temporary resolution to the conflict between two incompatible visions of “National Significance”: the tradition of defining our nationhood by remembering those who died for us in distant lands; and the the hunger for movement, the ceaseless drive towards elsewhere. The stillness of memory versus the motion of commerce. Each of them in its own way eludes the here and now, yet the concepts of memorial pomp and diurnal commuting seem irreconcilable. No-one’s being told the eventual resolution. Will the street buckle northwards, will it be subducted beneath Memorial Park, or will the highway, almost inconceivably, be hushed a few times a year for pre-ordained rituals of remembrance? For now, the cracks will be plastered over with lime chip and phalanxes of temporary nurseries: tensions unrelieved.

This corner abounds with such contradictions. To the north: Mt Cook School, divorced from its eponymous mountain; and block or so away the former milk depot, a reminder of the days of benignly patronising municipal socialism when a Council-owned dairy farm in Otaki would provide for the fat and calcium requirements of urban urchins. To the south: the Police barracks with their telltale prison bricks, a reminder of the old Mt Cook Gaol that used to lour over Te Aro. Among its prisoners were the “ploughmen from Parihaka”, rewarded with deportation and incarceration for their peaceful resistance to colonial encroachment. 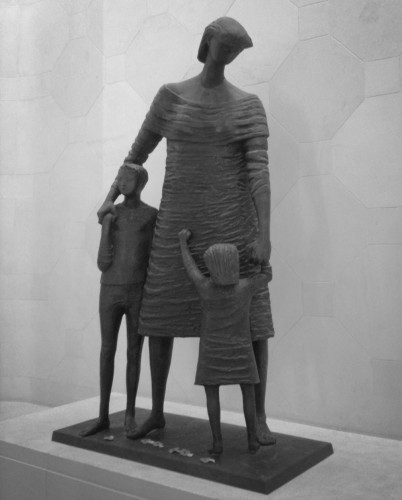 Arthur Street provides a respite from the density of history. It may be grim (“temporary” gravel traps, segregated sliplanes, Chinese canteens, light-industrial brothels), but it allows the psychogeographer’s overheated brain a time to decompress from Buckle Street’s militaristic overload. One step after another; sun and asphalt; the vehicular pulse. It’s a welcome breather before the tangled knots of the Cuba Street corner.

Thistle Hall announces that it’s “looking to the future with progressive ideals”, but the names of the new (second hand) shops that are slowly re-inhabiting this damaged intersection betray a more ambivalent attitude to time’s arrow: Aeon, Particles of Time. Erasure in the guise of preservation: shops and cottages were shunted, refurbished and in some cases rebuilt to form a “heritage precinct”, but it’s a blinkered “heritage” that celebrates colonialism while whitewashing living history. Transit’s twee little potted histories, now vanishing from the windows as urban life returns, petered out in the early twentieth century, passing over the politics, culture, art and struggles of the Upper Cuba most of us remember. Only the former Freedom Shop retained signs of that resistance: on an interior wall that was yet to be sanded clean, a few stickers remained, including the infamous black bloc chant “Capitalism? No thanks! We will burn your fucking banks!” That too is now gone.

On the other corner of what was once Tonks Ave, graffiti has been painted over in brown, only to be swiftly re-tagged in white. Few now would recognise the graffito that stood here for years, except as the name of a new band: “WILL TOBIAS”. Fewer still would remember the full text, extending down across the road. Not a name but a question — “WILL TOBIAS DEFECT?” — wondering whether “token” black Springbok Errol Tobias would make a run for it in 1981. The words lingered long after the question had been answered (in the negative), and though the text and its meaning have finally vanished, the walls still conjure the language of the streets.

Karo Drive takes off on its arrogant bend, slashing through the grid of all this Local Insignificance, sending houses scuttling away from its jagged edge. Marooned between an empty nano-park and the atavism of Tonks’ Well (bricks and weeds festering below glass), Regan Gentry’s installation Subject to Change is more aptly named than its creator could have imagined. Originally intended for the Arthur St corner (unwanted by Thistle Hall), and then for Willis St (rejected by Transit), it ended up here after a long chain of compromises. Which just underlines the subversiveness of this intentionally skewed pastiche of local architectural tropes: empty, functionless, skeletal, subtly yet fatally failing to connect with either vanished grid or new-hewn path — in a place such as this, what could be more site-specific than a sculpture that was intended for elsewhere? 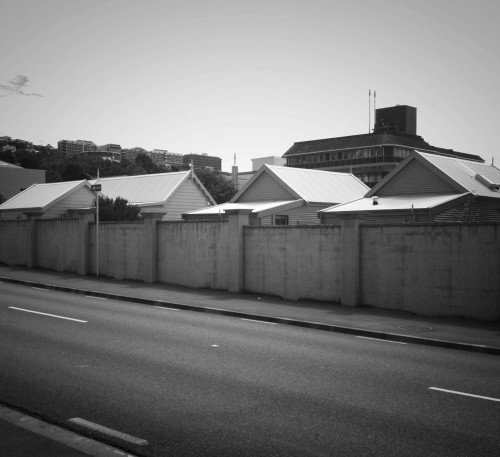 The Drive passes acoustic barriers, barely-exorcised ghost towns, the gutted shell of an inconvenient cottage. It’s still a raw gash in the urban flesh, and the sky pours in through its breach. The arterial openness is alien to Wellington: it could be the outskirts of Tauranga or Christchurch, a peri-urban flatland. Where the half-arsed highway collides with Victoria St (Wellington’s original Frankenstein St, bodged together from the severed limbs of unrelated streets) the results were always bound to be messy, and the carnage has reduced parts of Willis and Abel Smith Streets to bleeding stumps. Behind the remnants of a community garden, a stencilled Darth Vader puzzles over Rubik’s Cube.

After a day’s hot trek together, the highway and I have to part. As the bypass swoops down into its concrete trench, those travelling under mere human power are nudged out onto side paths. From here on, it will be a matter of weaving around, over and sometimes under the road, striking a balance between the designated National Significance of State Highway 1 and the unsignposted significant notions that gather around its margins.