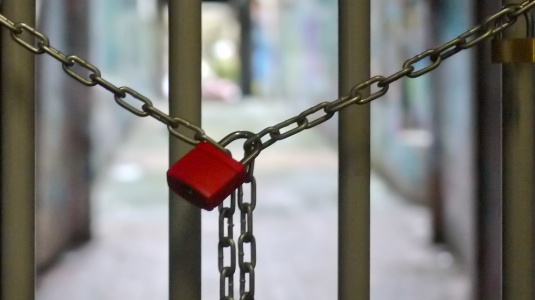 There was a photo in last Tuesday’s Dom Post of a paintbrush-toting chap in bright orange. Council employees wearing high-vis vests in the paper almost never means something good, and on reading the associated story* this was no exception:

CitiOperations manager Mike Mendonca said the lane was an “eyesore which attracted the wrong people” and one of the city’s most heavily hit tagging spots.

You say eyesore, we say the Civic Trust award-winning Left Bank Gallery. Which, it turns out, is private property.

The owners have decided to gate the lane off indefinitely. In return we said we will get rid of the graffiti so there is a positive outcome for everyone.

And it is, of course, for The Rugby: “We do want our city to look good for the Rugby World Cup.” Apparently the council’s vision of “good” is a lot like how you were supposed to look when you were seven years old and visiting your grandmother: starched, muted, all traces of personality savagely brushed away. We must be on our best behaviour for the rugby tourists, those internationally renowned arbiters of good taste and high culture.

It’s true that the lane was past its best–the rare new bit of actual street art in there quickly got swallowed up by the tags — and it’s also true that this is not the first time it’s been painted over. But we’re still worried, especially since the story also threatens that the Council will be going after “other tagging hotspots… in the coming months”.

We were kicking this subject around at Wellingtonista Towers and Alan said something that summed the issue up so nicely I decided to steal it:

It would be easy to scour away all the filthy but interesting encrustations that save Wellington from being what it was up until the late 80s: a really horribly boring civil service town.

It’s not like they’re going to put any of this stuff back after the rugby punters have left. Nor is a coat of featureless grey paint all that’s standing between the gallery and respectability (if it was, they wouldn’t have padlocked it). It’s still going to be a slightly grotty alleyway; now it will just be a closed-off one, stripped of what little life it had.

* Despite its strong resemblance to a Council press release, I checked the story against the actual release and the quotes are all original, so apparently reporting — not to say journalism — has in fact taken place.

UPDATED 10.57am to clarify the lane is private property. Sorry about that.

Keith Bolland describes his ideal job as “getting paid to read a lot and occasionally insult people.” Until he can achieve this blessed state he bangs away at the web to keep himself in cocktail ingredients.