On one side: the beige of townhouses; the hermetic whiteness of Fletcher Construction’s offices; the twee comforts of a garden centre. On the other: a wall of greenery, smugly settled exotics looming over dense indigenous undergrowth and the raw-cut clay below. Hard-won colonialism congeals into aspirational heritage, but with a psychogeographical trace lingering at the edges of consciousness — this is one of the old ways, a track traversed for generations before the Europeans arrived.

A calculatedly rough-hewn sign tells you that this is Glenside, then complicates the issue with the text “The Halfway 1840 – 1928”. While “Glenside” has the whiff of a cynical developer’s coinage — the sort of instant nostalgia often cooked up on the spot to lend quasi-rural des-res ambience to the latest tranche of placeless sprawl — its origins are more democratic. When the former name “The Halfway” proved too ambiguous for the post office, they held a competition. A homesick Scottish settler thought it reminded her of the glens, and there must have been something in the gentle hills and trickling burns that resonated with the locals. 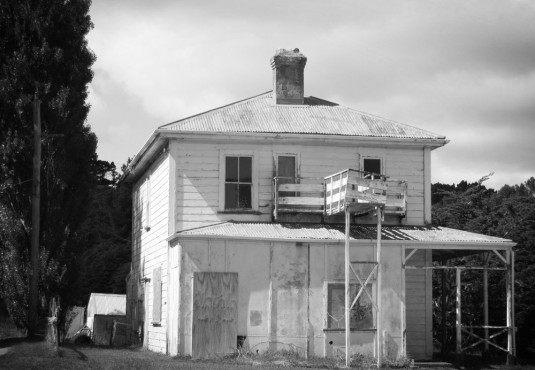 For a physical reminder of The Halfway, I walk past the garden centre, ignore the barrage of “Private Road” warnings, and head for the picturesque husk of a house at the end of a narrow metal road. This is the last of several Halfway Houses that once provided welcome shelter and possibly even more welcome booze for travellers, halfway between Porirua and Wellington. At the moment it looks halfway to ruin, and a long way from a decent drink. Plywood windows, tumbling pillars, weatherboards lost in lichen, a chimney crumbling back to clay.

Behind the house, past the poplars and ubiquitous macrocarpas, there’s a glimpse of timeless bucolic Kiwiana. Horses amble along well-worn dusty paths, shelter belts and broom step up the rolling slopes, streams wind lazily through what by Wellington standards has always been a gentle and well-watered hollow, and which must have seemed a perfect place to settle or just stop for the night. 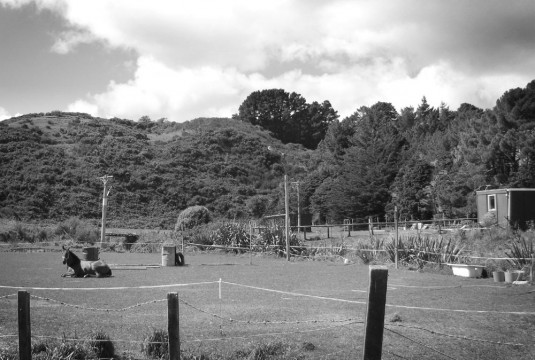 But beneath the surface, literally and figuratively, the land is layered with a different, tougher history. It has been a camp for railway workers and soldiers, a sale-yard for sheep and cattle, a golf course and a sewage treatment plant. It is in fact a typical edgelands landscape: used, abused and degraded, bearing the cost of humanity’s baser needs for eating, killing, moving and shitting (I’m not quite sure how the golf course fits into this, but bear with me). It now masquerades as a rustic idyll, a supposedly public reserve fenced off and leased out to a riding club. The grazing is no longer for workhorses but for playhorses.

Back to the road, where the Halfway is still a place of connections. The Porirua Stream is to the left now, having met the Belmont Stream among the paddocks, and it soon gathers reinforcement from the Stebbings Stream down in the gully below. Middleton Road swings back towards the low rumble of the motorway, and Westchester Drive begins its swoop up the scrubby hillside to meet and cross it. There are no footpaths, so if the villagers of Grenada want to walk to the Halfway they will have to take their chances with the gorse and the growling traffic. 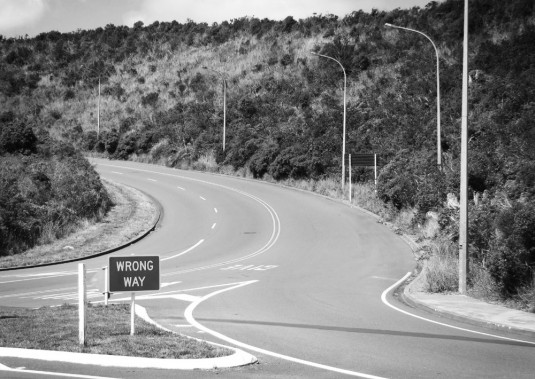 Westchester Drive’s younger brother (for some reason, while cars seem to share the conventionalised feminine gender with ships, I can only see roads as masculine) winds inexorably down the Stebbings Stream, gnawing away at the hillside as it seeks an arterial union at this intersection. It will link Churton Park, which is still metastasising across the hillside in sickly tumorous shades — Seventies shit-brown, livid Eighties puce, jaundiced Nineties ochre, the necrotic grey pallor of the Noughties — down through the traumatised valley and on to the motorway. Here I am at the intersection, forever the halfway. Never quite a place, but a marker between places.