Review: A Collection of Noises 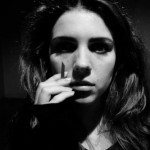 There aren’t any noises to speak of in A Collection of Noises. The play concerns the mental breakdown of an awkward young woman and claims Lynchian influence, so obviously there’s lots of archly deployed old-time rock ‘n’ roll; but every metaphor is visual. The central image is a bank of black and white photographs taken by the photographer protagonist, whose mental breakdown revolves around a familiar cluster of gaze anxieties and mother complexes. Audiences expecting the aural engagement teased by the title adjust expectations accordingly.

Though if noise–as opposed to sound–signifies an element of mystery or the impenetrable, we might still press the title into critical service. A noise is what one makes when one cannot make the sound of speech. And while a noise or two happens all the time–grunts, mumbles, assents and acknowledgements–for most humans, the only language described by the phrase “a collection of noises” is that spoken between the pre-verbal child and the parent.

So the lack of any actual noises in A Collection of Noises mirrors the gaping lack probed at anguished length within the piece: that of the mother, whose absence is felt through such creative choices as having the protagonist glare into the audience and scream “MOTHER WHAT CAN I DO I CAN NEVER BE AS PERFECT AS YOU.” We hope we are on the right track here?

This is not the medium for too-fine examination of the show’s central tension, that of a barely-tamed gaze which ever-threatens to erupt through the protagonist’s fragile Oedipal web of sanity into monstrous violence; happily, there is the entire genre of feminist film theory to which the interested reader may refer. Noises’ Alice could probably vanquish most all of her so-urgent psychological demons by just seeing what Mulvey or Clover had to say about Michael Powell’s Peeping Tom, arguably the modern originator of the subgenre to which A Collection of Noises belongs.

Also heralded by Peeping Tom–whose protagonist, just like Alice, lives for cameras, blades and maternal fixation–was a revived proclivity for the sort of Brechtian audience-hectoring whose hardcore title belt nowadays adorns the Gallic waistline of Michael Haneke. Haneke’s unclaimed influence on Noises is strong, in that the denouement echoes Funny Games’ fourth wall-fumbling scenes of audience belittlement; and in that the play’s sole shocking moment is handled in the exact same way as that of Haneke’s Cache.

In as much as people go to performances to see ritually-enacted dramas of sacrifice (which is quite a bit, cavemen etc), A Collection of Noises fulfills its contract with the audience; and in as much as people come to a horror show to be confronted with the marginally unexpected and monstrous, a person screeching at you about how fucking dare you come to a psychodrama expecting a horror show is perhaps apropos, all of the above notwithstanding. To invite audiences to a show and then to present another show, and then to berate them for expecting the show they paid to see, smacks of those collections of noises which we call “tantrums” and which we expect of the very young and the developmentally fixative. Hopefully it felt good to get it out.

A Collection of Noises at Fringe Bar, March 1, 2