(Guest cross-post from Giovanni Tiso over at Bat, Bean, Beam. There’s also comments worth reading there in response too)

In what you might choose to view as a coincidence, the cities of Auckland and Wellington are both engaged in a fight to eradicate street begging. Not homelessness or poverty, mind you: just begging. Auckland will likely vote later this year on an outright ban. Wellington, the more genteel capital, has opted for a measure that it has christened ‘alternative giving’, whereby citizens will be encouraged to donate to organizations who work with the homeless instead of the beggars themselves. Of the two initiatives, I find this one to be the most odious. 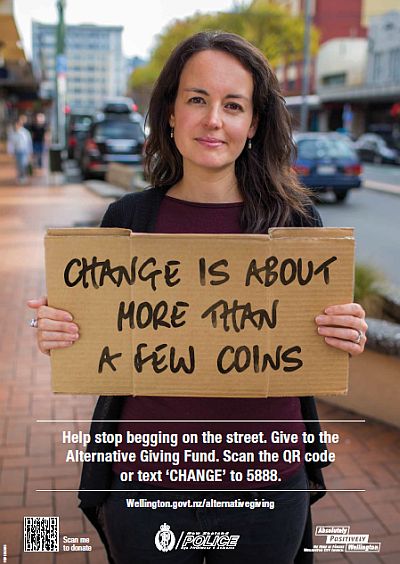 The Alternative Giving campaign relies primarily on two pieces of technology: in the initial phase, a series of posters like the one above are designed spread the message amongst the public. The posters feature a QR Code allowing smartphone users to make an instant donation, with the amount to be split evenly amongst the six participating charities. In the second phase, which is yet to be implemented, a series of “charity boxes” will be installed in begging hotspots, so that people can physically redirect the spare change they were about to give to the beggar, and put it to an economically more rational use. This is the image that is stuck in my head: that of a person begging for money, and of a passer-by reaching for his or her pocket, then putting the money inside the box instead of giving it to them. Will glances be exchanged? Will the look on the face of the alternative giver say: ‘I’m doing this for your own good’? Or will in fact the gesture be accompanied by a little homily? ‘You might spend this money on booze. I’m giving it to the box.’

Alternative Giving is the liberal answer to the problem of begging. Supported by the Green mayor, Celia Wade-Brown, and administered by former Alliance Councillor Stephanie Cook (this is the pair who blamed the neighbours of Michael Clarke for being insufficiently neighbourly), the initiative has been compared favourably to the Auckland ban, both by Cook herself (who called it a ‘less harsh’ and ‘much more compassionate and pragmatic option’) and by Diane Robertson of Auckland City Mission, sister organization to one of the recipients of the Wellington campaign. Criticism of Alternative Giving has also been generally less harsh, with no-one venturing to match Councillor Cathy Casey’s accusation that the proposed Auckland bylaw ‘treats beggars like dogs’.

Since Alternative Giving is the liberal answer to the problem of begging, its backers have to resort to a far greater degree of equivocation. The Auckland advocates – bless their black, black hearts – seem largely unperturbed that the bulk of the submissions they received came from retailers who wish to quite literally be allowed to sweep poor people away. In the more cultured, more enlightened Wellington, it is necessary for the goal to appease business owners to be carefully dissimulated. Thus begging is presented as the problem, but why or how it’s left studiously vague. The Mayor said that ‘it’s not good for anyone to have a significant number of beggars on the streets’, elegantly glossing over the issue of whether people needing to beg in the first place might be a bad thing, and for whom. A council spokesbeing lamented that people in an actual state of need stand to gain too much due to the generosity of Wellingtonians, estimating that they can accumulate (as opposed to earn, for words do matter) as much as $100 a day. Why this is a bad thing, however, he left unsaid. Some noises were also made about beggars possibly misspending the funds to buy ‘alcohol or drugs’, as if these were straightforward causes, as opposed to symptoms, of their economic distress. Or as if poor people shouldn’t be allowed some of those middle class vices. For their part, central city retailers approached by the Dominion Post ‘reported an increase in begging overall, often among people who did not appear homeless or in obvious desperate need’, as if their beef wasn’t with ‘real’ beggars, but just the opportunist pretenders (which apparently they can spot by their ‘tailored cigarettes and expensive energy drinks’. And no, I’m not making this up). 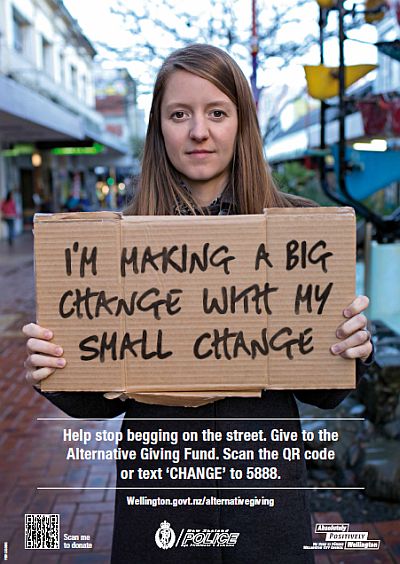 As for the effects of the policy, Councillor Cook suggested that ‘[t]hose who are currently perhaps ‘opportunist’ beggars if you like, will gradually disappear because they’re not getting a result.’ Why the genuine beggars won’t be similarly deterred, or deterred less, I couldn’t tell you. Perhaps Alternative Giving is like one of those intelligent bombs that never hit civilian targets. The statement however reveals the campaign for what it is: an instrument not to address homelessness and poverty but to hide the homeless and the poor. To make them ‘gradually disappear’. How you do that is not by donating to organizations that will help them out (that particular money will never be enough to go around, and besides it could be solicited in other ways), but by reducing their income from street begging. That is the sole point of the campaign, and the reason why it is so much more loathsome than its Auckland counterpart: because it dresses up as piety and turns into a desirable social goal the community’s desire to remove its poorest members from sight.

This ethics of not giving is persecutory and evil, and must be opposed. But it’s also important to recognise that the effort to sanitise the streets – which on the surface is nothing more than another exercise in capitalism keeping up appearances during a downturn – is also a form of control. And no, I’m not saying this just because this ostensible social programme happens to be co-sponsored by none other than the New Zealand Police. It is the same paternalistic logic that governs the national programmes of welfare reform. It is the insistence that we must be cruel only to be kind; that we must punish the weak so they can become strong. As if this wasn’t deep down about enforcing a failing economic and social model by correcting the subjects that fail to conform to it. This is how we care now. Look at it. This is who we are. 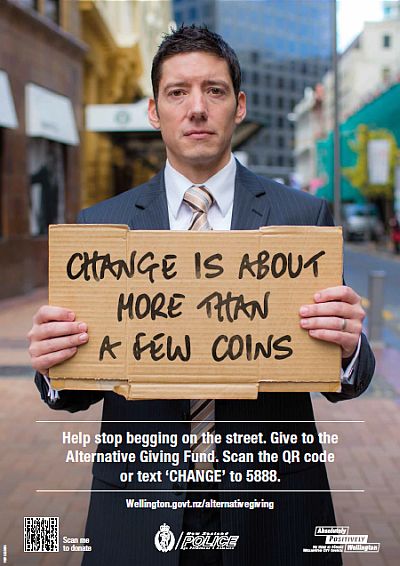 One of our many occasional guest writers.