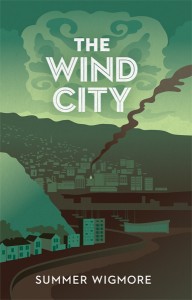 The latest book from local speculative fiction publishers Steam Press is the début novel of nineteen-year old Summer Wigmore. It’s a wonderful urban fantasy, set quite concretely in the very real environs of modern-day Wellington, but populated throughout with mythical characters and creatures from Maori folklore (collectively known as iwi atua).

Our two main protagonists are Saint and Tony, the former an out-of-work young-man-about-town (“loveably fearless” as he regularly reminds himself), and Tony, a dolphin tour operator whose business is literally scuppered when she has a run-in with one of the pontaturi (sea spirits). Both Saint and Tony have the ability to see the various non-human creatures (for reasons that become apparent as the story progresses), and thus become central to the plot when two new atua – Noah and Hinewai – arrive in Wellington and enlist the locals in their respective quests.

At times it’s reminiscent of some of Tom Holt‘s novels — taking modern, unassuming characters (in this case Tony, Saint being anything but unassuming), and throwing them head-first into odd and inexplicable situations populated with otherwordly creatures, for both dramatic and comedic effect. There’s certainly plenty of humour to be had. Saint is a walking quip machine, joking his way through scenes even while facing impending death at the hands of various monstrous creatures, and the interaction between the good-natured Tony and the impossibly beautiful, but socially inept Hinewai is hilarious. At one point, in the Hikurangi (the atua’s secret cafe, of course), Tony leads the assembled atua in a sing-along of the Flight of the Conchords song Robots, good fun in its own right, and better when, having just been informed of some of the rather anti-human behaviour of certain factions within the atua, the punchline comes: “once again without emotion, the humans are dead”.

The mixture of mythic characters with the modern setting also leads to some wonderful moments of bathos. In another scene, Whai and Ariki — rival spirits — are having a spat; insults have been traded, Whai having just criticised Ariki’s hair. Ariki’s having none of it…

“Well your hair looks like shark oil! Like red ochre, like all that’s contemptible in the world.”
“You stink of uncleanliness. You’re a dog, you are! My fern-root’s the bones of your ancestor!”
“You’re bored enough to play at war, but you know nothing of death or the hunt. Play with your nets as much as you like, fisher-rat. They will be the things that hold you still when I drown you, when I burn you, when I stab you deep.”
“You’re a dick.”

It’s that sort of book. The pacing is excellent, jumping between the various characters and plot-lines with ease and fluidly, and the twists and turns are like nuggets of literary hokey-pokey, adding extra flavour to an already delicious dish. The only thing that occasionally jarred was the liberal use of adverbs. Dialogue is not just said; it is said loftily, or confidently, or stiffly, or urgently, or lazily, or absentmindedly. This habit may have more attention drawn to it by a recent reading of Elmore Leonard’s “ten rules” of writing (which bans any modification of the verb ‘said’), and it nearly seems as if Wigmore has taken that particular rule, and decide to turn it on its head. No matter, Wigmore’s imaginative prose and fantastic story-telling more than make up for any minor stylistic quirks.

You can grab a copy in-store or online from Unity Books, or an e-book version from Kobo (and other purchasing options and info can be found over at the Steam Press site).

(note: Summer has since turned twenty, but I wrote this review before that auspicious date, so I’ve left it as is).