In memory, my feet are weary as I leave the Halfway. My present tense seems strained now, an affectation of immediacy undermined by the distance between walking and writing: years since I was here in the flesh; almost as long since my words last travelled this road. But I must persevere, carrying my flagging narrative beyond the last houses of Glenside and into the narrowing valley, letting the temporal dislocation tie another knot in the already tangled stories of Notional Significance.

As I prepare to walk, a lanky, hirsute figure strides out of the shimmering glare: a bogan Baxter in faded jeans and black Korn t-shirt. He crunches doggedly through the rough metal that lines the road, eyes squinting through me to the wavy asphalt behind my back. I mirror his determination and move forward. 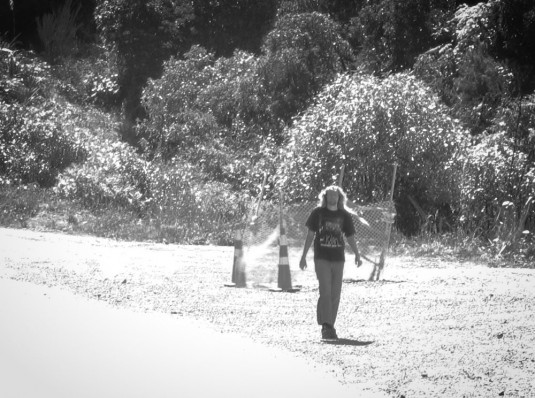 This stretch of valley feels like a rural interlude between the suburban tracts of Glenside and Tawa, and would make as good a marker for the “natural” boundary of Wellington as any other. But it’s far from untouched wilderness, and soon enough I pass the acknowledged sentinels of the edgelands: kennels and catteries. Lady Jane’s feline logo slinks below firs, while Smart Dogs Doggy Daycare guards the hill, and I imagine faint mewls and howls above the invisible motorway’s bassy drone. The only reason most suburbanites would stop here would be to drop off their befurred beloveds in some quadruped laager. Human inhabitants of these ragged edges tend to be less domesticated. Urbanity’s discontents. Bulldozer cowboys; sixties burnouts. Apoplectic rates rebels with talkback on speed-dial; trainer-wheel libertarians gone not-quite-Galt behind ramparts of macrocarpa and barbed wire.

Rather than take Middleton Road across the stream, I turn right and follow the curve of Rowell’s Road up the hill. This slender, ragged asphalt ribbon takes me closer to the highway, and has the further benefit of soon revealing other perspectives on this outwardly unremarkable valley. I stand above the dank portal where the railway breaks into light for the first time since Ngauranga, and observe the interwoven traces of human movement. Middleton Road follows the Old Porirua Road, which in turn was the original Māori track. To my right, the rumble of SH1 follows the former Wellington-Manawatu railway. The main trunk line below me was a model of efficiency when it first blast its way out of the rock in the 1930s to form the Tawa Deviation and replace the old line. Rowells Road itself was once a tramline to aid railway construction, and on its margins there remain remnants of the gargantuan rock crushing machinery that rendered chunks of redundant hillside into track ballast: the earth turned inside out and laid beneath our feet. Beneath it all runs the Porirua Stream, the first of many powers to exploit the earth’s weaknesses and force a way northwards to the sea. We’ve been following ever since. 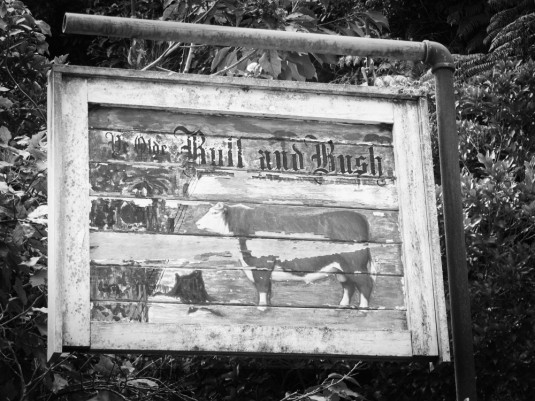 The road swoops up the hillside, grazing the motorway, cutting through histories. I pass the speculative ruins of the failed present (battered chassis lashed to flatbeds, caterpillars rusting atop raw earth batters), then come to a faux-rustic sign announcing “Ye Olde Bull and Bush” in anachronistic black letter. Its imagery presents colonial values with the stark moralism of a mediaeval diptych: on one side, a murky atavistic jungle of punga and tangled foliage; on the other, a truncated black stump and a stolidly triumphant cattlebeast stand in a wide empty field. Between the two halves, jagged black lines of barbed wire make the division and exclusion brutally explicit.

Eventually Rowell’s Road peters out to a narrow strip of gravel beside the railway. I face either a long retracing or an inadvisable dash across the tracks into the bramble-choked channel of the stream, but I need to explore further. The road shrinks to a track, then thins to a dusty trail between pine and fennel, with glimpses of tin shacks deep in the undergrowth, wreathed in ivy. In the end, my way is barred by a gate that means business, its KEEP OUT sign underscored by a heavy steel beam. 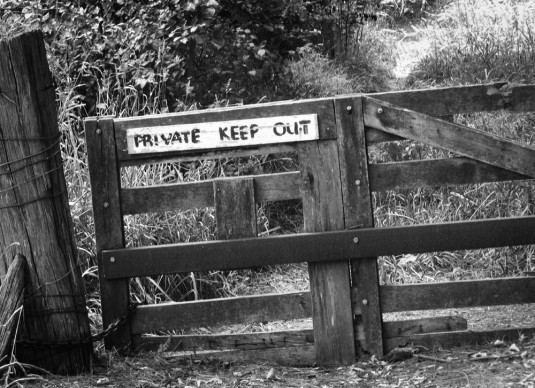 I briefly consider trespass. These are the grounds of Nott House, the photogenically dilapidated relic that always called to me from the other side of the river, a landmark that transmuted a suburban commute into an imagined journey through ghost town Westland. And there are rumours to match: of poison, guns and madness. A hermit was said to stare out from the porch, stark naked, his past murky with murderous intrigues. Trepidation and fascination vie within me. I like to think that when I turn back it is out of respect for the resident’s privacy, rather than out of cowardice.

A year or two after my retreat, that old man died, and the stories were revealed. In the 1950s, he had killed his wife’s lover, gunning him down not far from my point of hesitation, and yet he somehow escaped with just a year inside for manslaughter. Years later, from his habitual position on the verandah he watched a helicopter chase an escaped convict, until it tangled with the power lines and descended fatally into the stream. His great uncle, a prominent early Wellington surgeon, had his own cause of death recorded as “a visitation of God”.

At the time, I am ignorant of this Grand Guignol backstory. As I backtrack in search of an alternative route, I am instead preoccupied by the more pragmatic machinery of death. The sheds around the property were once a factory producing Borafume, an insecticide that Cecil Mason had invented just south of here, in a cottage near the Halfway. Mason also experimented with tanalisation, and the sites of his arsenical alchemy are scattered through the valley. A more mystically-inclined psychogeographer might trace the fabled reputation of certain arsenic compounds for inducing “trances of enlightenment and philosophical ascension”, and bend the timeline back to connect to that visitation of God. I, however, will just note a certain magickal symbolism in the aspirations behind both tanalisation and Borafume: that through chemical processes, dead timber cut from the living forest would achieve a kind of immortality in the service of mankind, immune to the depredations of waterlogged soil and ravenous worms. Permanence through poison.

Back in the present, I decide to risk a crossing. There’s barely space between the tracks and the thorny riverbank to pass out of reach of the trains, but I gingerly dash across and resume my downstream journey.

It may be the technical illegality of my manoeuvre, or the morbid nature of my thoughts, but for the first time on my journey I have a tangible sense of trespass. This valley is a palimpsest of prohibitions, marked by a landscape of barbed wire, barred gates and warning signs. Somewhere on the left bank was the site of Middleton’s Stockade, one of a string of forts built to oversee the colonial project and enforce it with muskets. Te Rangihaeata had placed a tapu on this route, and his people tore down bridges and harried the road building crews as the reality of Pākehā settlement and the dubiousness of the land purchases became apparent. I had read that the tapu applied to the road—that he had declared the trail to be his backbone, and warned the invaders not to tread on it—but some dispute this and say that the tapu was placed on the river itself. I’m not dressed for fording or for scrambling down steep banks, let alone for trampling on sacred vertebrae, and I begin to wonder whether I will ever find a way across the stream and back to Middleton Road. 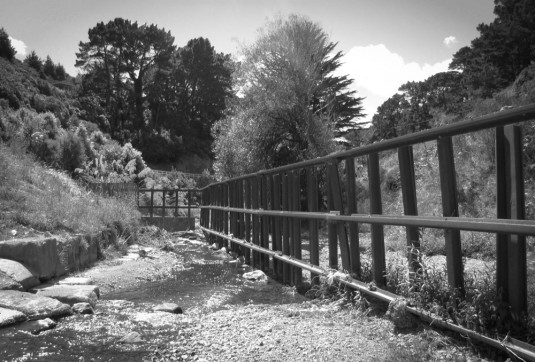 When I finally spy a crossing, it is at a place where the river seems most desecrated. Concrete cubes tumble down the bank into the riverbed, and a brutish steel cage forms a crude flood protection device. I pick my way across, stone by stone, and clamber up the bank to the road. From here, it’s a dull yet hazardous journey along a busy country road with little or no footpath, yet my eyes still dart around in search of connections. The foundations of World War II tank traps are buried at the roadside, so every hunk of concrete is potential heritage. Contraptions of railway iron and rough concrete were to be rolled across the road in the event of enemy invasion, and I remember that Te Rangihaeata’s men felled trees across the old trail to stop the European invaders from passing. Times change, but the land endures, and so do the means of its defence.

Now, as the road curves closer to the motorway, I can hear its familiar dirge and see its green and white signs through gaps in the macrocarpa screen. The valley begins to open up, but a vast unnatural bank rears up against the northeast skyline. I am coming to a crossroads.