Yes, this is a write up on the premiere of Taika Waititi & Jermaine Clement’s new film What We Do In The Shadows.

Yes, this post is well after the actual Wellington premiere BUT it’s not like there hasn’t been A LOT of coverage of the film.

Wellington, and the rest of the country, has been pretty excited about this film considering the publicity for it, including the release of the official trailer, only really kicked off just over a month ago. In fact one month ago the only people who really knew about the film were those involved in it OR those that keep a really close eye on overseas film festivals and knew that the film had already screened at the SXSW and Sundance film festivals.

For those of you who have been living under a rock over the last month, and have not looked at a screen of any kind, here’s a wee burst of info to get you up to speed: 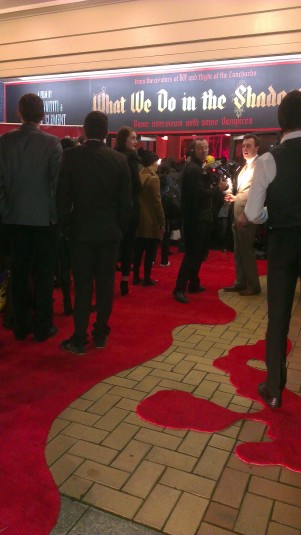 You could get your photo taken with the stars and, for me, the most important thing: sample the specially made beer from Tuatara Brewery: Delicious Neck.

Wellingtons finest were out in force, many in various costumed states, including Grant Robertson who looked very fetching in his Dracula-esque cape. The theatre was packed – verging on over flowing and everyone was obviously in high spirits because: how can you not be excited about being at a premiere of a film as fun as this.

Following the screening, which had the audience in hysterics, the stars all came out dressed up as the characters they portrayed and answered questions, as part of a Q&A session, in character leading to even more laughs:

The film runs in a similar way to how the Q&A did – free flowing, kinda off the cuff, loose but not out of control. The actors obviously work well together and really enjoy themselves. I understand that the script was not seen by any of the actors and the directors simply gave scene settings and ideas and they actors worked with those.

I won’t go in to great detail about the film – briefly: this mockumentary, funded by the “New Zealand Documentary Board”, follows the lives of three vampire flatmates in Wellington, and the interactions and challenges they face day to day in their home town. This isn’t a Vampires versus *insert other real creatures here*, it’s the story of a group of friends just dealing with whatever life throws at them.

Part of what I loved about the film is just how local it is – it’s a brilliant display of Wellington locations with Cuba Street, Courtenay Place, The Big Kumara (RIP, if that’s your kinda thing/Good riddance from the rest of us), Boogie Wonderland and the Rita Angus Retirement Village in Kilbirnie all make appearances.

What I’m saying is: There are a lot of laughs. So many I’ll be going to see it again.

We’ve seen Taika Waititi on Twitter say that, not only is What We Do In The Shadows currently #1 at the NZ box office but it had the highest NZ opening weekend of any self-distributed film! Well done! You can even help pay for distribution of the film too – by drinking a Delicious Neck you are helping fund the spread of a great Kiwi film.