Over the last week, Wellington has been the focus of an Anzac Day like no other. The long-awaited Pukeahu National War Memorial Park opened with a “spectacular” light show, and on Friday the city stopped to cheer a “spectacular” Anzac parade (paging Guy Debord!). This was followed by a huge turnout for the dawn service on Anzac Day itself. These were all resoundingly successful at fulfilling their purposes, but what were those purposes, and what wider agendas might they be serving?

[Disclaimer: this is my own personal view, and should not be taken to represent the views of other Wellingonistas, or of SBS.] 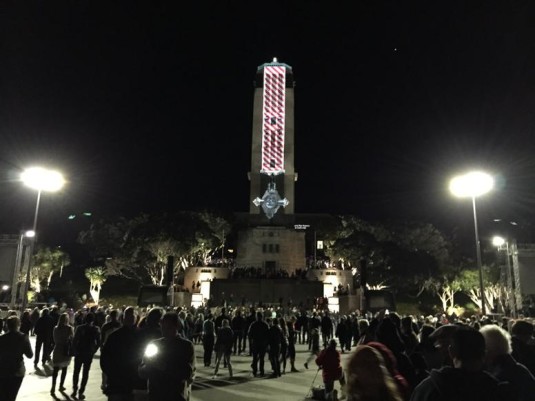 Many talented and dedicated people have worked hard to ensure that the full and nuanced story of the ANZACs and New Zealand’s wider history of conflict (including the stories of non-combatants and conscientious objectors) is told. But those subtleties aren’t getting through. The huge crowds at Pukeahu deserved the full story, but what they saw could cynically be described as a slick pro-military PowerPoint: kiwiana; brave chaps off to war; kiwiana; war is hell; sad poppies; kiwiana; WWII; Iroquois helicopters off to ‘Nam; more kiwiana; Willie Apiata looking staunch and heroic. While much of it would have been moving for those with forebears in WWI, the message came relentlessly from a military perspective, with no question of who they fought for, who they fought against, or why. 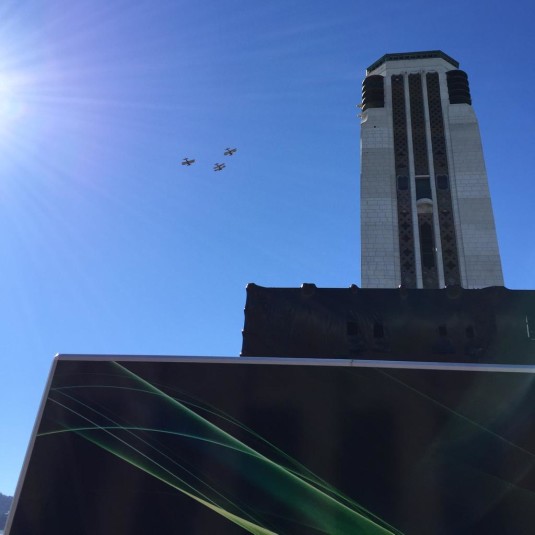 While the light show attempted some balance and acknowledged the tragedy of war, Friday’s parade dispensed with such niceties and went for full-on jingoistic circus. Sombre reflections on the horrors of industrialised slaughter don’t tend to feature confetti, children happily cheering howitzers, and breezy renditions of “76 Trombones”. A student of semiotics would be hard pressed to explain how it differed structurally from a May Day procession or a tickertape parade for victorious All Blacks. The Dominion Post blithely described this as “shades of the patriotic pride and sense of adventure our soldiers must have felt 100 years ago”, as if we should have learned nothing from the futile carnage of that “adventure”. I suppose this is to be expected when you hand the reins over to an acknowledged “WWI buff” and tank collector.

As well as this glorification of the military, this year I’ve noticed a particularly insidious form of essentialist nationalism. There’s an emphasis on remembering those of our ancestors who made “the ultimate sacrifice” for our country, but this excludes many New Zealanders. Our population has quadrupled since 1915, so a significant proportion of New Zealander had no ancestors here in WWI*.

For many of us, our ancestors’ experience of war wasn’t Gallipoli: it was the Blitz, Dachau, Belfast, the Killing Fields, or Eritrea. The Māori experience is different again, with some tupuna fighting for Empire and others against: others can tell that story better than I. But the assumption that a family history of going away to fight in WWI is an essential and “uniting” part of the New Zealand identity erases and excludes many New Zealanders.

There may be some truth in the standard narrative that WWI helped cement a particular national identity, but if so, it created the New Zealand of (say) 1965. The Aotearoa New Zealand of 2015 is at least as much a product of the following 50 years—of Vietnam, the Springbok Tour, Rogernomics, immigration, the Māori Renaissance, jet travel, two waves of feminism and the internet—as it is of Gallipoli.

Yes: if you had a great uncle who died at Chunuk Bair, honour his memory. But that is less and less a defining part of “the” New Zealand story. This country has always been good at honouring those who went away to war; but we mustn’t forget those who suffered in wars that came to them.

Why does this matter? Because many politicians and many in the media keep telling us that Anzac Day “unites us all as a country”, and this builds a pressure to fall in behind a simplified (and to some extent fabricated) myth of unified nationhood. While the dawn services offered the dignified moments for reflecting on loss that they usually do, Friday’s parade signified a shift from commemoration to festivity.

A cynical person would say this serves two purposes: it makes it easier to convince us that it’s noble to engage again in foreign wars; and it helps to usurp Waitangi Day as our national day. According to the Dominion Post editorial on Saturday, Waitangi Day is about “passing ideological argument” while Anzac Day “unites us all”. But it doesn’t. Anzac Day doesn’t unite the quarter or so of us without family connections to the ANZAC corps; nor did the war unite the country at the time. It was in fact bitterly divisive, and it remains fundamentally political. And of course Waitangi Day is political: any national day must be so by definition, because a nation state is a political entity. The “festivisation” (to coin an ugly word) of Anzac Day is part of a very political process to erase certain histories and to turn others into sacred, unquestionable truths.

If you want a Wellington antidote to the official narrative, I recommend Remember The Peacemakers at Thistle Hall (until the 3rd of May).  You could also read about the oppositional roles of Te Puea Hearangi, Archibald Baxter, Rua Kenana and Peter Fraser; a Turkish viewpoint; or Tim Leadbeater at The Daily Blog invoking Robin Hyde. Hopefully, once the poppy confetti has washed away, Pukeahu will have room to commemorate its own local histories of conflict. Right there on Buckle St in 1913, soldiers armed with bayonets and machine guns set up a barricade against striking unionists. And this, tucked away behind the Carillon, is a memorial to Māori deported from Taranaki: 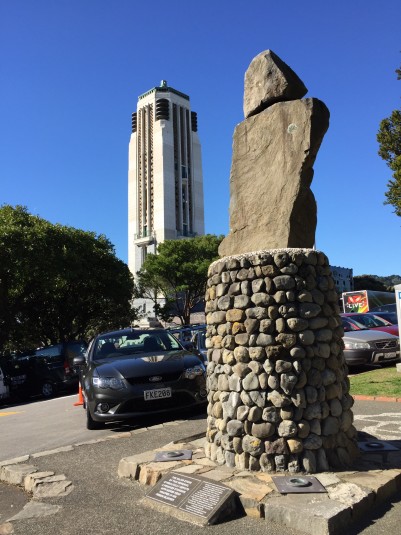 New Zealanders have a vast range of experiences of war, and much of it is at odds with the image of “young men willingly going to the other side of the world to fight for the British Empire” that has dominated this Anzac Day more than any other that I remember. Maybe it’s becoming easier to forget the diversity of human experience behind the myth of “the birth of a nation”; maybe it’s the price of the club. But the resources are out there to flesh out and challenge the official Anzac story.

* I haven’t found any statistics to say what proportion of New Zealanders had ancestors in this country at a given time in the past. But using the yearly departures and arrivals statistics from the Statistics NZ website, and a few assumptions, I make a very rough estimate that maybe a quarter of the population had no ancestors here in 1918, and hence have no family connection to the ANZACs. In many parts of the country, that will be much higher: in suburbs with a high proportion of recent immigrants, the vast majority would not have ANZAC “in their blood”.

Anzac / Events / Politics
Previous Post
Review: Spyfinger! A show about spies
Next Post
Dan at the head of the FishHead