Dan at the head of the FishHead 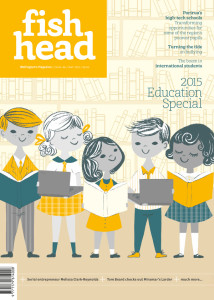 How time flies! Five years since we hit the launch party, FishHead magazine is going from strength to strength, no doubt because they’ve been smart enough to solicit a bunch of Wellingtonista contributors (I wrote in the very first issue, current ‘istas Tom Beard and Tom Goulter and gone fishin’ Hadyn Green are all regular columnists). The biggest coup of course is that our film reviewer Dan Slevin is in the editor’s chair now. His first anniversary at the magazine has been recently, so we thought we’d have a chat with him about how it’s all going.

1. Congrats on one year as official editor of FishHead – what have some of the highlights been?

Thanks. There have been lots of highlights. Seeing the magazine’s circulation and readership grow when most print media is struggling is a highlight. The feedback we have been getting from readers is extremely gratifying. Seeing stories that I had only imagined look even better in print is rewarding (I’m thinking specifically of Tom Goulter’s short history of the Wellington sex industry via the city’s buildings in the March issue and Graeme Tuckett’s interview with Russ Kalivati, the Petone community cop, in the April issue).

My first instruction to all of our contributors when I started back in February last year was to express themselves – to not feel constrained by a corporate or FishHead voice – and I’m pleased that everyone responded to the challenge. Introducing new writers and columnists like Steve Joll from The Breeze, comedian James Nokise and Heather du Plessis-Allan. Professionally, the highlights are endless.

But personally, I have to say getting to follow the Wellington Phoenix Football United tour featuring West Ham, Newcastle and Sydney last year was one of the best things that has happened to me ever. We did a feature article on the event before it happened, when lots of people were still sceptical, and commissioned a great cover – our most expensive. That led to me going to press conferences, watching the Auckland game from the press box, getting to meet Winston Reid and the other players and get our special cover autographed – mindblowing. And our relationship with the Phoenix has got even better since then.

Being offered a trip to Buenos Aires by Air New Zealand for a travel story is up there, too.

2. You’re obviously a member of the Wellingtonista as well – what do you think some of the advantages of writing for a magazine as opposed to a blog are?

Collaboration is a real advantage. With most blogs you write articles and post them with little support from other people. At FishHead, I never write more than 5% of the magazine. I have contributors who write better than I do, a sub-editor who makes sure that we are all grammatical and stuff and typo-free (she hasn’t touched this), exceptionally creative photographers and illustrators who work fast and then a design team in Nelson who make the whole thing look beautiful.

I also love having something physical to hold in my hand every month. It’s a wonderful thing – to make something with your brain that has actual weight in the world.

3. What changes/developments/continuingness do you wanna see at FishHead over the next year?

We desperately need to fix our online presence. We have been tinkering with a new website for months and only now are we close to launching – there’s so little time left at the end of every month but we need to be a greater part of the day-to-day conversation in the city rather than just the month-to-month conversation.

We also need a digital subscription option so that we can make the physical copies we print go further. I’m sure lots of our complimentary subscribers would prefer a tablet option which would mean we can increase our household distribution – we choose a suburb every month to get a free copy.

Marketing, promotion and retail – they all need attention this year if we are to continue growing.

4. FishHead obliviously has commercial pressures on it – are there any stories that you haven’t been able to pursue for fear of upsetting the advertisers?

The relationship with advertisers is the biggest surprise that I have had in the job this year. In many way, they are extremely helpful at providing ideas for stories (self-interested, of course) and I’ve taken to saying that in the competition for stories and features in the magazine advertisers jump towards the front of the queue. We want them to be happy and for their businesses to be successful but at the same time, my first responsibility is make sure that our readers get content that is worth their time and attention.

To be honest, now that I know how things tend to work, I’ve seen it happen a lot in corporate media as well as in little indies like ourselves. Once you know what you are looking for you see it everywhere.

We’ve never avoided a story for fear of offending an advertiser but it sometimes happens anyway. We lost a great regular restaurant advertiser because of a single paragraph in a Tom Beard review. That hurt us – and I regret that I didn’t handle it more sensitively – but our readers wouldn’t expect us to soften our writers’ opinions. Then you become nothing more than an advertorial rag and there’s plenty of those around.

Maybe that’s why our main competitor doesn’t have any reviews? How dull.

5. You’re in good position to have a good overview of the city – what would your vision of Wellington in five years be like?

Fewer cars, more bicycles (on the road not the pavement – I’m a pedestrian and they scare the bejeesus out of me but I know why they are forced to do it), better internet to support our growing, mostly hidden, weightless exporters who are building great businesses without ever sending an invoice to anyone in NZ, 10% bigger population with that growth absorbed by greater medium density living (I’m in the market for a decent affordable 3-bedroom apartment but they don’t appear to exist), a global Wellington marketing campaign that acknowledges that there is more to the city than craft beer, coffee and mountain biking, water taxis or small ferries from the airport to the city so visitors’ taxis don’t clog the Mt Vic tunnel and they get to see the beauty of the city from a different angle, our civic and business leaders realising that no one ever knows what is going to happen in the future and that a lot of the best things about the city are a result of people taking a punt and having a go.