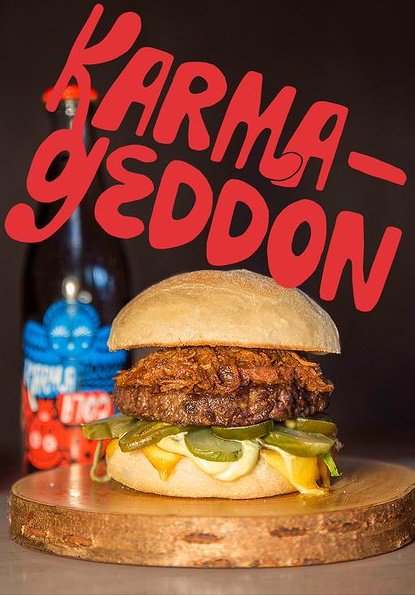 Anyone who refers to burgers as “dude food” clearly has never had their uterus screaming at them for meat before. Accordingly, I was bloody happy to be invited along to the launch of the Karmageddon burger – Karma Cola’s collaboration with Grill Meets Beer.

The Karmageddon burger is made with Karma Cola braised pulled pork, beef pattie, homemade BBCola sauce (also made with Karma Cola), habanero mayo, smoked Cheese, shredded lettuce, jalapeño and pickles in a bun to get that perfect burger mix of soft, savoury, sweet, crunchy and sour.

We’ve tried Karma Cola before and love it (it doesn’t have caffeine in it! Hurray!), but I’d never been to Grill Meats Beer before, because I’ve always been put off by their sexist sandwich boards (they’ll babysit your men for you while women be shopping, ha HA, hilarious). I thought I knew for certain that my favourite burger in all of Wellington is the Four Horseman from Nanny’s Foodtruck, but damn if this isn’t a serious contender to the crown. A big thick juicy beef patty AND pulled pork? And chili fries with amazing dipping mayo? OMG. My uterus is totally appeased.

And so is my brain and heart, because one dollar from each burger goes to Karma Cola’s foundation supporting farmers in Sierre Leone. So far the foundation has donated over $60,000US to the village where they source their kola nuts, which has been used for building a bridge, AIDs education, a rice mill and a seed bank, to help the village towards a sustainable future.

“Although the world drinks about 2 billion cola branded drinks a day, the people who originally discovered the stuff haven’t made a cent from all that cola drinking. Karma Cola is trying to set this record straight. After a ten years of civil war and more recently ebola the people who grow our cola in the 8 villages we work with in Sierra Leone need a hand. The money we send them from the sale of every bottle goes to much needed infrastructure, rehabilitation of roads and plantations, bridges and schools,” says Simon Coley, co-founder of Karma Cola.

The burger’s on sale for the rest of November, and if you’re into this sort of thing, you should most definitely go and eat it. Oh, and if your kind of karma doesn’t involve eating meat, we hear that TV Disko’s guest vegan pulled ‘pork’ (actually apparently jackfruit) burger at Laundry is the bomb diggity too. Woo!