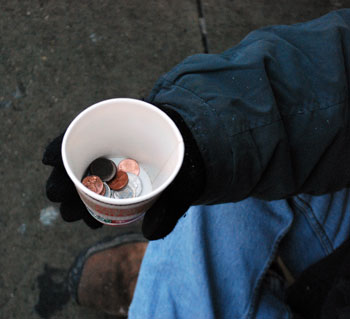 You may have seen yesterday’s DomPost story on begging, which trumpeted that the Council was “considering banning begging or fining good samaritans.” This generated much justified outrage, even though deeper into the article it became clearer that this was just one extreme option among a wide range of measures that had been considered after complaints from the public, and one that had been thoroughly rejected by a report that is going before Council. There was also mention of a “kindness can kill” ad campaign to link begging to drug abuse, which understandably horrified a lot of readers.

Luckily, Rob Kelly from Scoop.co.nz pointed us to the full report, including a report commissioned by ThinkPlace and the officers’ recommendations. It’s long, but worth reading if you have the time and can stomach some of the heartbreaking stories of abuse, institutional failure, and relentless vortices of debt that drag people into such desperate situations. Because unlike certain politicians and columnists, this report actually considered the evidence, including the results of various attempts around the world to deal with the issue, and talked not just to retailers and service providers, but also to people who beg. Radical, I know.

For those without the time or spoons, here’s a summary of some key points:

How did those last two proposals get into the report, along with other moves to further demonise the already vulnerable, when it looks like no-one who’s actually studied the issue in depth thinks they’d work? Maybe officers felt they had to consider all options, no matter how repugnant or ineffective. However, one might suspect the direct intervention of certain councillors, hungry for tough-talking headline-grabbing sound bites. And even though nothing like that made it into the “Next Actions” part of the humane, evidence-based report, the DomPost (despite a much more sensible and empathetic editorial today) has given those councillors exactly what they wanted.