Shows on this week 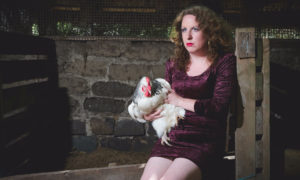 Starting this week is an encore season of Onstage Dating by performance artist Bron Batten. Watch as she goes on first dates on stage. (These are actual first dates with a stranger, not with a performing audience plant.) Witness the vulnerability, thrills and heartbreak of the dating experience up close, as Bron Batten facilitates, interrogates, deconstructs and gleefully destroys the rituals of contemporary romance. Everyone I talked to who saw this show in the Fringe Festival raved about it. Don’t miss it.

Dido and Aeneas: Recomposed continues to 13 April. It’s a delightful version of Henry Purcell’s classic opera with a few extra musical samples mixed in. (Including some from Alex Taylor, musical director and performer on the evening.) We get right up close as they take us through the theatre spaces. The measured pace of Baroque music is contrasted with the energy the performers and musicians bring to their performance. Warning: you may need tissues at the end due to the extraordinary vocals from Amy Jansen and the marvellous reactions from Rhys Hingston, Tamsyn Matchett and Barbara Paterson.

Long Cloud Youth Theatre presents Desire Caught by the Tail by Pablo Picasso starting tonight at Whitireia Performing Arts Centre. Picasso wrote the play in 1941 as a response to German forces occupying Paris, and the despair, fear and starvation that followed.  Under the direction of Brett Adam Long Cloud has taken this rarely performed play (often dismissed as impossible to stage, meaningless and incomprehensible) and created a theatrical experience that aims to be chaotic, beautiful, humorous and prophetic.
Taking their personal feelings about their place in the world and their hopes for the future as their starting point the fourteen members (aged from fifteen to twenty two) of the Long Cloud ensemble have created a wild and bracing piece of theatre that ultimately offers us all hope in dark and overwhelming times. They have discovered in Picasso’s text a cautionary tale about power, distrust, ambition, and of course, desire.

Circa Theatre has the final week of Escaped Alone by Caryl Churchill directed by Susan Wilson. It stars Carmel McGlone, Jane Waddell, Irene Wood, and Ginette McDonald as three old friends and a neighbour. A summer of afternoons in the backyard garden, drinking tea and chatting, lots of gossip, lots of idle chit chat, casual conversation becomes a pool of radiance defiant of the terrible darkness outside. They’ve added an extra matinee show.

The Beatgirls’ 21st: All Grown Up featuring Andrea Sanders, Kali Kopae and Carolyn McLaughlin celebrate 21 years of great costumes, sassy choreography, and humour with a selection of audience favourites.