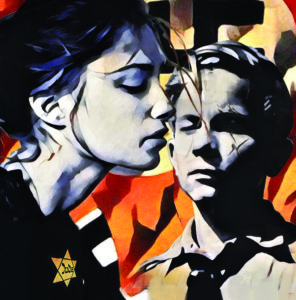 Opening tomorrow night at Circa Theatre is the world premiere of Caging Skies. It’s a “haunting story of love and obsession that explores truth and lies at both political and personal levels.”

“Johannes, a zealous member of the Vienna Hitler Youth, discovers a fateful secret – his family is hiding a young Jewish woman, Elsa, in their home. Her life in his hands, Johannes and Elsa embark on a gripping journey of obsession and love that blurs the lines between the captive and the free, the victorious and the defeated, as the horrors of the war unfold around them and each must find a way to survive.”

Desiree Gezentsvey has adapted Christine Leunens’ award-nominated novel (Prix Medicis and the Prix FNAC 2007) of the same name. Although they’re both graduates of International Institute of Modern Letters at Victoria University they didn’t know each other back when they were studying. Gezentzvey comments “It’s quite wonderful that we’ve been brought together by our writing.”

Note: There’s a Q&A session after the performance on Tuesday 15 August 2017