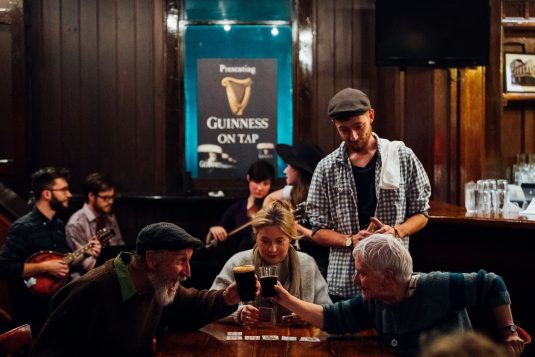 Four Nights In the Green Barrow Pub is the third of Cassandra Tse’s shows I’ve seen, and each one was wildly different from the others.  M’Lady had me in stitches, The Aliens, in tears.  Four Nights, though, took me down memory lane.

Having a hundred noisy musical Irish cousins of my own, I was probably always going to be delighted by this show.  The moment I walked into the room and heard the band playing that familiar music, it felt like a homecoming.  My childhood soundtrack was at least half Dubliners and Irish Rovers and Mary Black, and, like many others in the audience, it proved too difficult to resist singing along at points.  Literally, in the upstairs room of JJ Murphy’s, which could have been any Irish pub in any city in the world, we almost instantly felt welcome, like any other punter, having a pint and a sing with strangers who’d soon be friends.

Darragh Green runs the pub, inherited from his father and his father before him.  He serves beer and whiskey to the same regulars every night, and his sister Aisling sings with the band, Irish music only.  It’s looking like this might be it for the rest of his life.  His parents’ ghosts are in every corner; the ancient menus and the board games and the bellowed outrage from the regulars whenever he tries to suggest doing something different.  And so the pub, with all its warmth and humour and music and love, has become a kind of cage for Darragh.

Until Arad, in town on business, walks in and shakes everything up.

The cast are marvellous.  Finlay Langelaan’s Darragh is quick with a comeback, hard-working and generous, but also brittle with exhaustion.  Langelaan perfectly portrays a young man who’s tried so hard and for so long to be a good son that now it’s the only thing he knows how to do.  Being gay is not a real part of his life…  he’s out, but that just doesn’t mean anything when there are pints to pour and the tap’s clogged again.

Aimee Sullivan as Aisling is the total opposite.  Out and proud, boisterous and argumentative, she dominates every moment she’s given.  It’s hard to tell whether Aisling’s genuinely that abrasive, or if it’s a lingering habit, her response to her father’s disapproval, just as Darragh’s has been to comply and conform.  Sullivan somehow adds subtle softness to balance a character who might otherwise have been cartoonish.

The pub’s regulars are Glendon (Ralph Johnson) and Nuala (Hilary Norris), married 50 years and presumably fighting the whole time, and Caitlin (Karen Anslow), quiet and thoughtful, maybe a little slow, but genuinely caring.  I’m pretty sure they’re all having enormous fun with this show, and they provided borh depth and liveliness.  Johnson and Norris embodied their parts with no effort at all, bickering constantly, treating Darragh with casual thoughtlessness but meaning well. Anslow provided pause, and peace, and a couple of the sweetest moments in the show.

Alex Rabina was Arad, Muslim, bisexual, cocky as all hell but with a similar fragility to Darragh.  While Darragh is at a permanent standstill, Arad never stays in one place.  Unwelcome at home, he travels constantly, telling himself it’s what he wants.  Rabina was completely endearing as Arad (though I couldn’t figure out the accent….  was it American?) and I was genuinely sad when he left. 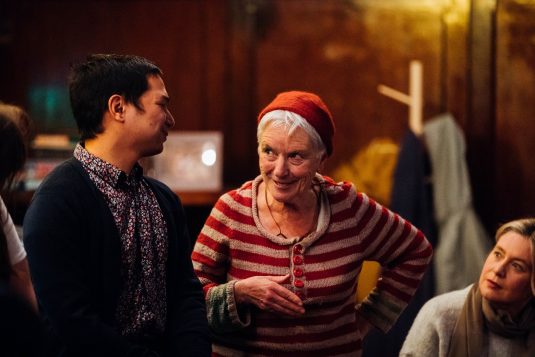 This was a love story, sure, but it was a lot more.  It was political, as anything with LGBT+ themes is, especially set in Catholic Ireland.  But it was also a story about accepting the flaws in the family we have, and loving them anyway, recognising the value of the family we choose, and loving ourselves.   I feel like Cassandra Tse has a knack for very human moments, the moments when cracks appear in a facade, where characters have to choose a new direction and everything’s scary.  Tse takes those moments and celebrates them, and that’s a very joyful thing to watch.

Basically it was freaking lovely and I would happy see it again.  It’s on for another seven nights and I strongly recommend it to anyone, but especially if you’ve got a wee bit of the Irish in you.