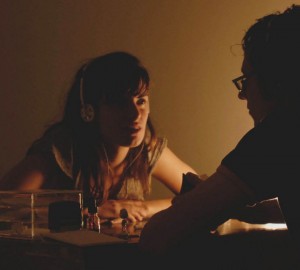 A man and a woman sit across a table from one another at a Wellington cafe. He’s making something from a ball of Blu-tack, she’s drawing something with chalk.

The latest production from Downstage, Etiquette, does things a little differently. Gone is the familiar location of the Hannah Playhouse. Instead the action takes place at a table at the Matterhorn. Also gone are the actors, with the audience becoming the performers. (OMG, I know.)

The two audience members/performers are seated at a regular Matterhorn table, which is set with a number of curious props, including a glass of water, tiny figurines and that ball of Blu-tack. These two participants each have an iPod, which provides them with their specific instructions for the production.

Lines are fed, stage directions are given. Sometimes the action takes place literally between the two participants, other times it’s within the audio, complete with a sampling of Ibsen’s A Doll’s House.

This 30-minute production is a lot of fun. Sitting at the table, following instructions, waiting to see what your tablemate is going to say or do to you is a big part of the experience.

There are two Etiquette tables set up at Matterhorn, both off in a side alcove, so you (hopefully) won’t be disturbed by noisy and/or munted diners. The two tables also run 15 minutes apart from each other, so you won’t end up running simultaenously with the other table.

Etiquette was created by UK theatre company Rotozaza, and is part of their “Autoteatro” concept of “self-generating performance”. It left me wanting to run through it again, and again in the man’s role, or even experience another story in this format.

And here’s a tip: Etiquette make for an excellent date activity. While it’s just fine for serious couples, friends or family, the closeness, interactivity and the ability to take on another character and say outrageous things would be a brilliant thing to do with someone you fancy. Aw yeah.

For an idea of what to expect, here’s a little trailer for an earlier Glasgow production. It doesn’t give too much away – in fact, it even looks a little different to the Wellington production.