Today’s guest post comes courtesy of Daisy Coles – you read more of her stuff over at daisyandzelda.wordpress.com 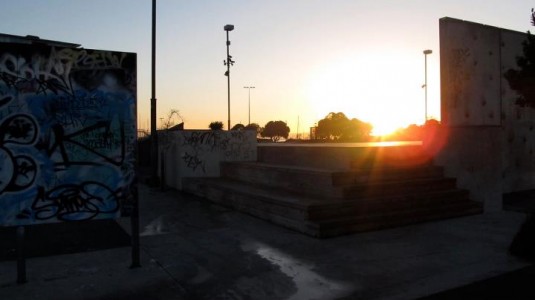 I’m sitting in my togs on shady grass in a hidden corner of Europe. I’m watching the dragonflies flit round a lazy little branch of the Danube, with a wine spritzer in one hand and an incomprehensible newspaper beside me. An absolutely foreign heat wave is weighing on my shoulders: there’s no ocean for thousands of kilometres, and the air here knows it. It gets heavier and heavier: it will only be broken by one of those otherworldly afternoon storms tomorrow or the next day. Right now though, the sky is painfully blue.

But what am I thinking about in this moment? Out of nowhere, a little pang strikes my heart. It’s nostalgia – yes, it’s actually nostalgia – for the Wellington winter.

The weather is the big thing to hate about Wellington: the Wellingtonian’s fly in the ointment; the Aucklander’s glibly pulled trump card as to why their grass is greener.

In winter it’s at its meanest. Rain can come at you from any (and often seemingly every) direction and gets at you indecently, even under your clothes somehow: disregarding of your virtue. Wind will pick things up – whole, dense, serious things, like books or food or birds – and hurl them at you petulantly. Combined, these two elements will seize on your freshly done hair and pick it apart until your spirit is broken entirely and you run crying into the public loos in Aro Park, to stand in front of the foggy mirror wondering what on earth you can do to make yourself presentable at the office.

But you’ve got to admire it, right? It is ultimately, gloriously wild and unpredictable. Who knows where these awesome forces come from? We have heard that they swarm up from Antarctica itself, the most southerly of southern outposts, to prey on us, unchecked by any bastions of civilisation along the way – how romantic is that thought? And then, as quickly as they come, they are gone. Suddenly, you’re shoving your latest umbrella in the bus stop rubbish bin and life is all sunshine and a huge glassy harbour and a long, cold beer at the St John’s Bar.

In Wellington winter, you’re often running – or being pushed – down a wind tunnel, from one haven to another. From a café where the warmth comes from a big shrine of a coffee machine to a bar that’s warm from people heat, everyone sitting round tables of house whites quietly letting their soaking woollens steam dry. From brunch to a gallery; from a restaurant to a movie theatre.

You start appreciating your workplace, because it’s heated and your flat sure isn’t. Your flat smells the same as every Wellington flat you’ve ever had: kind of mushroomy­-oniony, especially in the bathroom, which is perpetually damp. You suspect there’s a hole in the ceiling in your bedroom where the bastard wind’s cunning fingers have actually been pushing water in at you, because your duvet never feels completely dry and there are tiny black mould spots on the bottom of your curtains.

There are cracks in the wooden floorboards in your lounge through which you can actually see daylight, and this comprises some of the only sunshine your flat ever sees. After your weekly Saturday grocery outing you walk up 58 steps between your car and your front door toting your bags of food and it’s inevitably raining cats and dogs and blowing a gale.

But these are clichés that, if they enter your head, you never say out loud.

Because we don’t, do we? If a Wellingtonian comments on the weather, it’s ‘Ooh, it’s a bit windy!’ (cheerfully sardonic) or ‘Ah, a bit of rain. Looks like it’s passing over though’. Those who were born here never give it a second thought. Those who end up here via places further north never get used to it. They blithely pretend they’re still in Hawke’s Bay and never put on such things as raincoats, woolly hats or long trousers – or even own them, half the time. Those who have graduated to a Wellington flat from a Dunedin one can only be glad they’re sitting around watching Shortland Street and sipping their Milo wrapped in one sleeping bag, rather than two. The common denominator is something very kiwi: a blindness to hardship, a willingness to make do; a pride in it.

In general, I’m not a fan of winter in itself (I’m one of those ex-Hawke’s Bay people determined to deny that any item of clothing with the word ‘thermal’ in it is ever necessary). In fact, I have travelled back and forth across the world over the last few years blissfully avoiding it.

But I love Wellington. And I have this suspicion that Wellington’s winters are one of the things that defines it. I have lived through my share of them, and in my mind the collective memories are large and frustrating and cold, but ultimately heart-warming. They are all coloured by an undeniable feeling of community: the shared human, kiwi, Wellingtonian experience of eking out an existence in a crazy little green valley as forces unfathomable rage meteorologically above us, and laughing about the bathroom mould.

But for now, I’m going to sip on this spritzer and try to tease a little meaning out of this newspaper, and then presently I’m going to go inside and send messages to people back home gloating about this damned heat, I think.