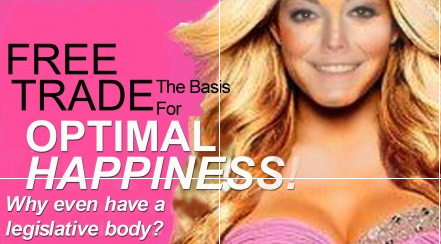 It’s hard to come away from Privatising Parts without a renewed sense of optimism for our next step, you know, as humans. Teetering at the brink of a new dystopian singularity for every day of the week – global economic collapse, post-human obsolescence, a flailing mass descent through Sartre’s nausea and out into hyper-Materialist nihilism – this unremittingly bum deal we’re calling the 21st Century is starting to look like a global Texas Chain Saw Massacre: Who Will Survive, And What Will Be Left Of Them? But we’ve got it all backward, suggests Privatising Parts. The question we should be asking is, What Will Be Left Of Us After We Survive Each Other?

Privatising Parts is part manifesto, part hyperbolic free-associating ramble, and part one-woman, one-hour Mad Scene. The show depicts (using the term loosely) the struggle of On the conditions and possibilities of Helen Clark taking me as her Young Lover author Richard Meros, as he attempts to wring meaning from his grief over failing to win Clark’s intimate favour. Life, Meros suggests, is pain, and heartbreak doubly so; but unlike those perpetually inactive Buddhists, who’ve perched over that particular pot for far too long without pinching one off, Meros has a plan. And participation is mandatory.

Meros, here, is played with elephant-in-the-room femaleness by the show’s writer, Heleyni Pratley; but as far as Privatising Parts‘ conceits go, “woman plays man without reversing the gender pronouns” is pretty elementary stuff. Conceptually Meros may be the text’s father and nominal creator; but if the show has a mother, it’s hard to choose between Clark, Ayn Rand, and pioneering Cyborg Feminist Donna Haraway. Well, they do all have the same haircut?

Thus it is that Clark serves as muse for Meros/Pratley’s party-rocking mashup of Randian free-market prescription, giddy Wired-mag post-humanism, clucking Cosmo-mag advice for the lovelorn, and a gender-bending, flesh-slashing high tension that would confound even Haraway. Or, for that matter, the makers of the gender-bending slasher High Tension.

There’s a lot to like in Privatising Parts: Meros exhibits a playful deftness, a mastery of the reductio ad absurdum, that manages to rope in Judge Judy, The Terminator, talk radio, neurological fiddle-faddle, the collapse of the mental-rational consciousness-structure, and online dating sites – all without breaking character. If you’re paying to see a one-woman show about sexuality and corporatism at an indie theatre where you have to clear out by 8pm so the flatmate-comedy can set up, odds are you already have your thoughts on, say, Ayn Rand (at least via fictional tribute-acts like Paul or Andrew Ryan); but the choir will find little preaching here, at least apart from an impassioned plea for voluntary commercial castration.

Pratley and director Eleanor Bishop visualise Meros’ free-associating text well, though it’s hard to imagine any author being quite so liberal with the Caps Lock as Pratley’s hysterical visionary would suggest. If in doubt, the thinking seems to be, go large: by which token the show’s all-singing-all-dancing third act would appear rather riddled with doubt, the closest Pratley/Bishop come to giving the game away.

Pratley’s show – and it certainly is hers – is at its best when she’s playing the irrationally reasonable idiot-savant, cherry-picking from the Greatest Hits of Late-Capitalist Visioneering to concoct a blue-sky nightmare of privatized sexuality. Don’t be the last kid on the block left toting the same tired genitals you were born with: buy in while you have the chance.

Privatising Parts by Heleyni Pratley from the book by Richard Meros, directed by Eleanor Bishop, at Bats Theatre until 6 October 2012.