After my detour, I head back to the motorway’s edge. My route takes me along Mexted Terrace—a name that is engraved across Tawa’s skin, and with its twin associations of car dealerships and rugby it encompasses two dimensions of the suburban mythos. On the corner of Tremewan Street, with the highway traffic in sight, is the home of the Tawa Art & Craft Society. It is not a grand edifice. The low-gabled house sits among shapeless lawns, with only a battered verandah and laminated Comic Sans signage to distinguish it from its domestic surroundings. Art knows its place.

The nature of domesticity changes as I walk along Tremewan Street into a rare (for Wellington City) tract of state housing. These are neither detached households (the Angloform mock-villagery of familiar familial state houses) nor bold utopian structures heroically forging communities in the sky, but awkward, self-denying half-way houses, lost between the two visions. Once you stretch out a weatherboard box to these dimensions, giving it a hipped roof no longer connotes cosiness; it speaks of the barracks and the dorm, of paternalism and the loss of agency. They stand to attention around a sunken carpark, backing on to scrub, armco, and the relentless motorway. And behind that, the dark plantations bide their time, awaiting their transformation into the asphalt knot of the new Keneperu Interchange.

The street descends, to the constant accompaniment of droning traffic. As the road curves away to the left, it reveals a small park, and I cut across the patchy grass. A group of children watches me and my camera warily from the edge of a playground. One of them gives me a quick upwards nod. “Sup, Grandad?”

Silently, I nod back, while walking down the hill towards the railway. From here, I glimpse a wide, elevated plateau across the valley: the former Porirua Lunatic Asylum. Kenepuru Hospital still functions here, a timid sub-Brutalist cluster set amid placid lawns, but the rest of the grounds resemble a post-apocalyptic autonomous zone; a land apart; a land of forgetting and renewal, of decay and reinvention, of exploitation and resistance. The mental hospital teemed with stories, stories that haunt me but that I shy away from telling. They are too raw; too contested; too entangled. Not my stories. 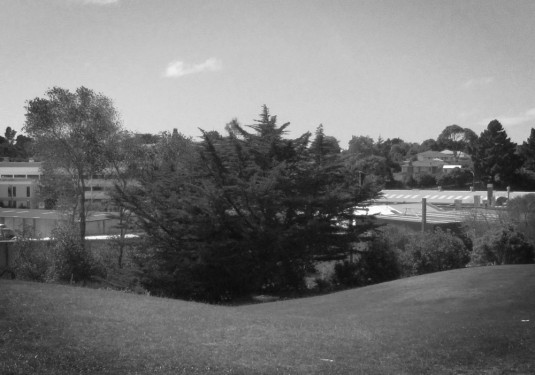 The park turns ragged where it backs onto Keneperu station. A lonely, lopsided platform. An orphan. Threatened with abandonment because it served the abandoned—state house kids, desultory industry, a hospital that many would rather forget. I climb the long ramp of the rickety overbridge, and descend towards a gravel track squeezed between the tracks and the Porirua Stream. The paths converge as Tawa Flat is compressed between the hills and terraces. The valley that began with a prison ends with an asylum. Soon the motorway is again an audible presence to my right.

On the other bank, industry and amusement cohabit among the concrete. Hulks of classic cars await restoration; weeds sprout defiantly from the cracks in a desolate go-kart circuit. Ballard in microcosm. Others have found their own entertainment, as the brightly-bombed tilt-slab attests. Swirls, skulls, signatures. The language of the unheard.

Somewhere near here, there will be a bridge, spanning stream and railway to connect Kenepuru Drive to the new interchange. Tellingly, it will duck beneath the existing highway to meet the Transmission Gully route, dodging any contact with the road that’s currently State Highway 1. The motorway that I’ve stalked for most of my journey will no longer be nationally significant: it will be merely a local commuter route for a string of coastal towns and suburbs. I almost feel sorry for it.

I have now officially walked out of Wellington. At least, the Territorial Authority of Wellington City ends here, as I step into Porirua City. This could be a natural place to end the trail of Notional Significance, and my weary bones and even wearier prose would welcome that. But the wider Wellington region holds many more stories, along both the existing and proposed routes, and I’m committed to making the journey. Walk on.

Above the bluff on my left, I catch glimpses of Porirua cemetery, and I think of Meg Campbell’s lines: “From the window I see a hedge/between hospital grounds and cemetery./A fallen jam-jar spills its dead/gladioli on a grave.” Once more, I’m tempted to divagate through the extraordinary psychogeography of that world within a world, but I could not do justice to its terrors and contradictions. A sanctuary for some; a prison for others. Kathy Dudding’s glacial, heartbreaking documentary Asylum Pieces says more than I ever could or should. 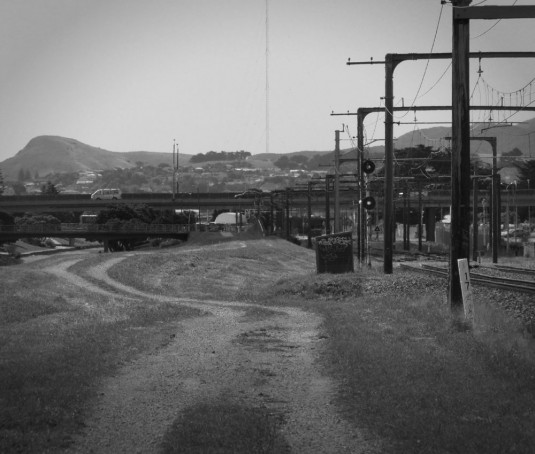 The stream; the track; the railway; the highway: now all in alignment, running due north, aspiring towards the sun and the allure of distance. Surely it’s coincidence that they all point to the ghostly iron trace of Titahi Bay transmitter? The country’s second tallest structure, beaming out the voice of the nation, looms at the apex of these paths like an obelisk on a ley line. I feel an inexorable pressure northwards…or that might just be the barely tangible pull of gravity, the same subtle slope that sends the stream tumbling over its last few weirs towards the sea.

On my other flank, the motorway traffic seems captive to the same desire. The narrative of the road is so often the myth of freedom, but the relentless, restless torrent reminds me of a treadmill. A motorway is never a place to be: it is a means to an end, and the end is “elsewhere”. I briefly consider comparing the drivers to voluntary inmates, willingly subjugating themselves to the madness of a system that worships motion and denigrates place, but then I realise the shallow glibness of that comparison. The need for escape—even for movement for its own sake—cannot be so easily dismissed.

I can only leave the last words to Meg Campbell, from her poem Solitary Confinement: “A bird sang in the hospital garden/and outside the unbreakable/glass window the flowers grew/without supervision, and the sun/lifted into the sky of its own volition.”