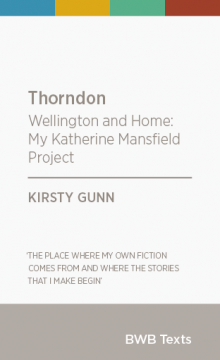 et Williams Books publishes a series called BWB Texts, “short books on big subjects by great New Zealand writers”, and two new ones will be launched next Thursday at Unity Books. Martin Edmond’s Barefoot Years recounts childhood memories of life near Ohakune, while Thorndon: Wellington and Home, My Katherine Mansfield Project by Kirsty Gunn (Rain, The Big Music) will be of particular interest to Wellingtonians. This slim book “zig-zags across Thorndon streets, Wellington hills and New Zealand childhoods to explore the meaning of home,” and you can join Gunn with her zig-zagging for a walking tour of Thorndon on Wednesday the 8th.

Thorndon’s not just about political gossip, right-wing alpacas and the long shadow of Te Ahumairangi Hill. Our own Alf Rune has teased out some of the stories—of lawyers’ duels, “Gay Going’s-on”, bohemian affairs and expressionist Brutalism—that lie under the genteel suburban surface. I like to think that the publisher’s choice of the phrase “zig-zags” is a reference to “the asphalt zigzag where the fennel grows wild” in Mansfield’s ‘The Wind Blows’: a path that Alf also traversed on his trek between skyways and underpasses. Gunn is an incisive writer, and I’m no doubt that both the book and the tour will delve deeply into the rich veins of meaning beneath Thorndon’s zig-zagging streets.