Yep, its not food.  But I was seriously impressed with this place in our back yard that I had no clue existed.

Nga Manu is the largest remaining remnant of coastal lowland swamp forest on the Kapiti Coast, and was established as a reserve in 1974.  It has developed over the years to the well laid out facilities of today with the opportunity to get up close and personal with a vast array of NZ birds, reptiles, insects, trees, flora and fauna (and a tiny mudfish). 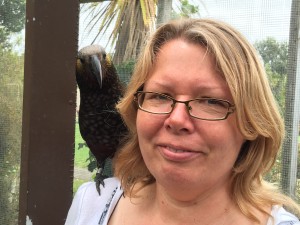 I’d highly recommend the 11am guided bird feeding tour ($25 adult entry instead of $18, once per day only) to learn plenty, rub shoulders with a Kaka (literally), hand feed chunks of cheese to Kea, and (usually) see a plump tui eat creamed corn from the guide’s finger (he was having a tantrum today though so didn’t oblige).

I would never in a million years have guessed all the different diets – carnivorous baby chickens for some, mince for others, insects, seeds, berries, vegetables (including the aforementioned silky creamed corn), and most plated on spikes in 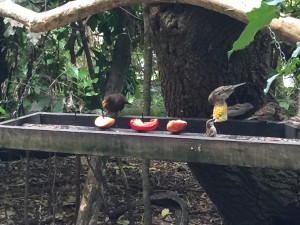 a very appealing fashion.  Fine dining a’la’avian.  Interestingly some of the smaller birds were actually the more carnivorous.  And many also got sugar syrup to keep them happy and well conditioned (clearly not diabetics).

The tuatara are usually unmoving, but we struck a veritable frenzy today with rapidly blinking eyes and a bit of scurrying about.  And I’ve never seen a swan do such things with its neck.  I was waiting for its uh-oh moment, but it managed to reassemble itself into normal form again.  An excellent party trick. 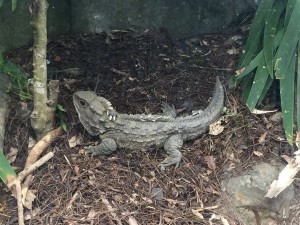 There’s a nocturnal house with a pair of kiwi to be seen up close while feeding, an elderly morepork matriach, some cleverly camouflaged owls and good information about predators and their impacts.  With their daytime created during our night.

The reserve is breeding many of the species, and they’re noticing birds popping over from Kapiti Island to visit, so they’re making a difference to the local ecology and our heritage. 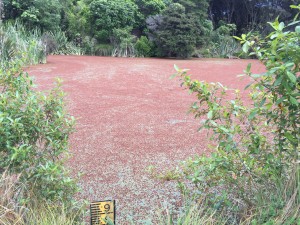 Nga Manu also displays the Red Azolla Water Fern, which apparently bloomed about 50 million years ago in such quantities that it sucked enough CO2 from the atmosphere (and stored it as carbon in the sea floor) to cool the earth and create the Icehouse period which we are currently in (one wonders if more Red Azolla is needed?).

Most of the paths are very easy to navigate (no problem for strollers, wheelchairs or other walking aids, other than the duck gifts you’ll have to pick off
everything), and there’s really good information all the way around (especially on 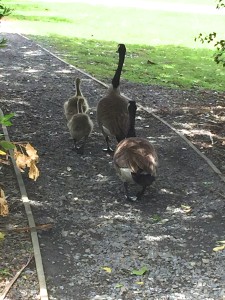