TL:DR: we ate two pretty decent burgers and will never return to Foxglove.

Pig Mac at the Featherston

On Friday at lunchtime I knew I had to eat something WOAPy in order to keep up the reviews, but was craving freshness. I thought I might be able to get into Annam without a booking, because I’m just one person and perfectly happy to sit at the bar, but it was not to be. Without wanting to go too much further or waste more time, I popped into the Featherston and they were happy to have me, even though the place was heaving. No newspapers or magazines in sight to read, but I got a comfy table and my water topped up regularly. 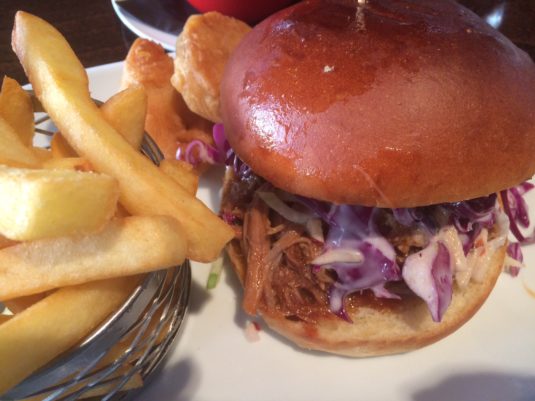 Pulled pork may be so a couple of years ago, but this was a very tasty rendition of it, not overly sweet and with a decent amount of smoke to it. I would have appreciated a little more spice, and the bun could have been hotter, but the apple fritters on the side were gorgeous (and it was smart not to put them inside the burger). The chips were standard pub chips, well cooked, and the whole thing decently priced and the service was good. Nothing ground-breaking but burgers don’t always have to be. I will definitely go back to the Featherston for lunchtimes when I am in the mood for pub food done well. 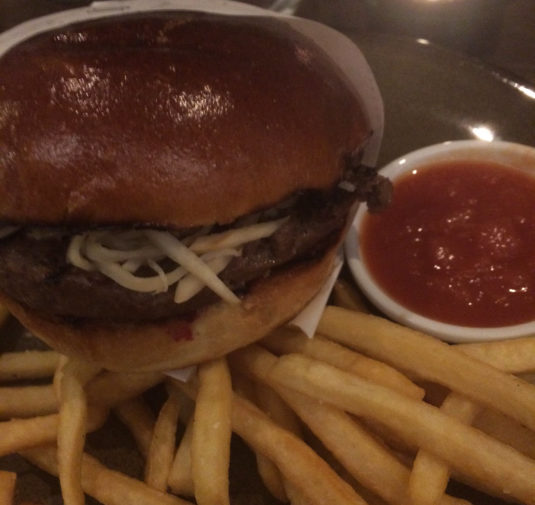 Plenty of people all over social media have been loving the hell out of this burger, but I thought it was just okay, though it’s the only burger I’ve had that I could pick up and eat easily. The patty was too thin for the venison to stand out over the beetroot, and the fries were just like lukewarm offerings from MacDonalds, no sign of the truffling. I would have sent them back, but I was already aware that we were dickbag guests, given that we were a tipsy group who’d booked for ten people, changed that to five people and then had two more people show up 20 minutes late.

Enchantment and surprise awaits in Foxglove’s Secret Garden. Enjoy a delicious five-course degustation dinner or lunch with an especially designed menu accompanied by outstanding Martinborough Vineyard wines. Award-winning winemaker Paul Mason will talk you through his selected wines to accompany every course. A truly magical experience celebrating local garden produce, great wine and a secret after- party through the wardrobe.

So, clearly I had hospitality karma waiting for me, but I don’t believe the other 101 patrons deserved the incompetence and inhospitality of this event. Tickets were $155 which is not cheap, but I talked my sister and friend into coming along thinking that it would be a lush affair full of fun. It’s great copy, after all. Doesn’t that sound like a good event?

When we got to the ballroom at 6.30pm – the time on the website and confirmation emails,  we found it adorned beautifully with chandeliers, strings of lights and flowers everywhere. So far so good. But normally at a dinner like this, you’d walk in and be handed a glass of bubbles. We were pointed to the cash bar. I took one look at the flimsy folding chairs and asked for something more robust, which they very kindly fetched from the balcony. So glad I did, given that dinner took until ELEVEN PM to finish. I feel sorry for how uncomfortable everyone else would have been even if the dinner had run at a normal pace.

It was 7.15pm before we had our first glass of the winemaker’s wine in our hands, and with nine tables of 12 people in the room, food was just as slow to come out. We’d tweeted earlier in the week about how impressed we were that Foxglove were emailing guests to find out their food allergies. The first course was crayfish with salad leaves. Or, if you’re allergic to shellfish, you received just the salad. Not even any extra oyster mushrooms to bump up the protein texture. That seemed odd given the advance notice they had of people’s dietary requirements, but it turns out that was one of a continuing series of poor hospitality choices.

Not only were we assigned tables, we were also assigned seats, presumably to help with the dietary requirements. Obviously the people you sit with have an impact on how much you enjoy the night*, especially when there is so much time to kill in between courses. It was a good half hour or more before the second course, another dish that was actually supposed to be served cold, came out. The salmon gravlax was lovely, and did go very well with the chardonnay, although most glasses were nearly empty by that stage because of the wait. The woman next to me asked for more chardonnay, and was pointed to the cash bar. She said “Not at a $150 dinner I don’t!” and she was given more wine. No one else at the table was asked if we’d like any more. We all would have liked more wine.

We definitely would have liked more wine in the HOUR it took for the first main course to come out. The fault was definitely in the kitchen given how the waitresses were lined up waiting for the food to come out, but they were also sometimes carrying one plate at a time. Wine glasses were cleared off tables (no offer of more wine), washed, and then returned to the tables empty, and then they were filled. The lights were too bright and there was no background music. Our beef was supposed to be hot but was cold. An hour later, our pork belly was also stone cold. And we were sober. Very sober.

A full quarter of the room had left by that stage, given it was 10.30 and the event had started at 6.30pm. The dessert wine was delicious, but how it took an hour to bring out a slice of cheesecake is beyond me.  There was no chance we would go to the exclusive afterpart because it was after 11pm and we were disgruntled, cold, tired, hungry and sober.

The winemaker told us to “drive home safely”. You should never be able to drive after a winemaker’s dinner, especially one that takes SO LONG between courses. Glasses should be kept full. Entertainment should be provided.  I regret buying tickets to the event. I regret making my friends buy tickets to the event. I regret any money I’ve ever spent at Foxglove before. What a cold inhospitable room that was, and what a striking contrast to the (cheaper) amazing event at the Bolton and the very cheap wine quiz at Avida the week before. This was their first Winemaker’s Dinner, but they have large events in the ballroom all the time, surely they aren’t run this poorly? Paul the winemaker said on Twitter that the delays were out of his control, but unfortunately I’m always going to associate Martinbourgh Vineyard with Foxglove’s incompetance.