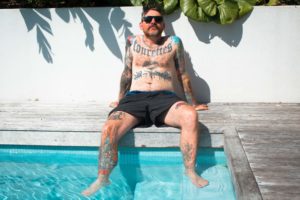 After success at LitCrawl last year, Dominic Hoey  is returning to Wellington with Your Heart Looks Like A Vagina at BATS Theatre next week. It’s a one man show about being diagnosed with Ankylosing spondylitis, a form of inflammatory arthritis that affects the spine and joints in the lower back. Treatment aims to minimise symptoms and prevent complications. Hoey is careful to note that the show is “way funnier than it sounds!”

“The show is myself and tech woman Ruby Reihana-Wilson, award winning director Nisha Madhan and producer/drunk Taylor Macgregor. I originally wrote the script at an artist retreat in Rarotonga and then workshopped it with the team. I’m super lucky to have such an amazing bunch of people involved, all of them all top of their perspective games.”

Despite a couple of reasonably high profile musicians also public about having the condition (Mick Mars from Mӧtley Crüe and Dan Reynolds from Imagine Dragons) Hoey says the main reaction from others is ‘you have what?’ “I’d like to raise awareness of conditions like Ankylosing Spondylitis and help people with similar diseases feel less alone. I know when I first got diagnosed I felt really confused and isolated. The whole time I was going through the diagnosis and treatment I was making mental notes about all the crazy and ridiculous things that were going on, whether that was in the healthcare system or with WINZ etc. Then when came time to write the play I started to link them all together and use all the skills I’ve developed as a performer and poet.”

Those skills have seen Hoey release four studio albums, two books of poetry, and one novel. So far.

Here’s a Loading Docs short they made about the show.