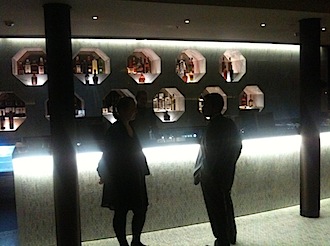 One of the most exciting and stimulating things about living in Wellington is the fact the our cinemas are continually reinvesting in their facilities and always trying to top each other in quality of fit out and customer experience. What have we done to deserve this!?

This year the burghers of Miramar got the Ming opulence of the Roxy (and by that I mean Ming the Merciless not Ming Dynasty), Readings have started a long process of upgrading their facility with the introduction of the Titan XC brand toWellington and next year the Lighthouse comes to town with a boutique three screen offering on Wigan Street (opposite Havana Bar).

Just in time for Christmas the Embassy has opened two more screens on the ground floor in the shells that were constructed during the 2003 “Return of the King” refurb. They’ve called them Deluxe (confusingly considering their ground floor coffee bar neighbours are also Deluxe) and they have exceeded all expectations with the quality of vision and execution.

When Event Cinemas took over the lease on the building I must admit I was jaded by the big chains and the general sense of not knowing what to do with the place but as Jane Hastings, General manager of Event’s NZ and Australian operations, said in her welcome speech last night, “the Embassy has a way of getting under your skin.” So instead of simply fitting out a couple of digital screens and reaping the synergies and efficiencies they’ve raised the standard in quite significant ways. 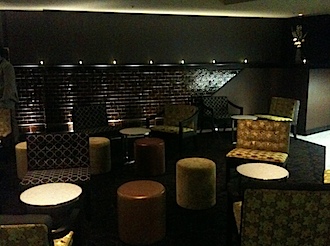 While the new cinemas fill the old orchestra pit – the vacant space under the main screen – the old Fringe offices and cinema storage has been converted into the Deluxe Bar and it is a thing of beauty and wonder. Embassy Manager “D” did a fantastic job of keeping his excitement in check when I talked to him about it on Sunday, betraying no hints of what was in store once the curtain was opened.

I have included a couple of murky cellphone pictures to give you an idea of how lovely the space is. Suffice to say it is now my new favorite Wellington bar. I haven’t gasped walking into a bar since going downstairs to the stark Kubrickian fantasy of the Jet bar basement but going through the tunnel to the Deluxe forced a sharp intake of breath.

I’ll let others describe it properly (maybe the Fly could take a shot at it?) and I’ll limit myself to discussing the two new screens: 70 comfortable seats each with the latest digital projection onto decent-sized screens. There was nothing playing in the main auditorium last night so we couldn’t judge the sound insulation but the audio generated by the cinemas themselves was perfectly acceptable.

The only technical problem was the choice not to install proper masking for ‘scope ratio films. last night’s Tintin was a 2.35:1 ratio film with black bars between the image and masking at top and bottom. When I mentioned it to Ms Hastings she implied that she hadn’t been told about the decision and that something would be done. Let’s hope so.

That was the only blip in an otherwise successful night. Going to the movies is getting better and better. Now, what are we going to do about the poor old Paramount…