Everyone who’s a drinker knows that the best conversations happen when you are plied with good food and good drinks, so I’ve decided I’m going to interview some choice Wellingtonians after we have been imbibing together.

First on the plate is Beth from Eat and Greet which launched last year and is doing a really great job of talking to the people behind the food of Wellington. We met at Hummingbird  (which I rave about, and she recently interviewed the chef Glen) and had some cocktails and some wine and an enormous piece of  meat, and then out came the voice recorder. After the jump and these Instagram pictures, you’ll find passion, drinking the blood of our enemies, mocking of Instagram, and the anti David Burton… 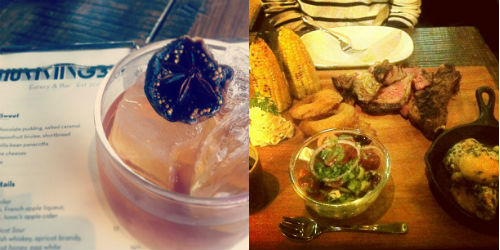 Jo: Okay Beth, eat drink and eat and greet – I’ll write your name down properly later. Tell us what we just had for dinner.

Beth: So we just basically had an umami bomb in our mouths, starting off with a show with a mushroom syphon that syphoned off an insanely good mushroom tea, which we sipped while having beetroot tortellini, and then we shared a big giant bone of meat together, and basically made dirty jokes the entire time. There was a lot of meat innuendo, and bone innuendo, but it was hard not to.

Joanna: My god, there were raisins in our entree according to the menu (Raisins are the WORST)! So our entree was meadow mushroom and goat cheese tortellini with golden raisins and pine nuts, and syphon mushroom tea, but that doesn’t say beetroot, and there was most definitely beetroot in our pasta. The mushroom tea tasted like you were drinking your opponent’s blood after a mighty battle, and it was amazing.

Beth: Spiced onion rings, I’m not a big onion ring fan, like take them or leave them, but those were ridiculous.

Joanna: They were great onion rings, I still think Monterey‘s are my favourite of all time. Right, Beth, Eat and Greet Blog: why did you start a food blog? Is it because of the dramatic shortage of them in the world?

Beth: Ha! There’s a lot of food blogs in the world, and I read maybe 60% of them, so the world does not need another food blog. But I was looking at the Concrete Playground blog awards last year, and I was looking at the food section, and I basically saw that the food blogs up in Auckland were like “hey, this is where it’s good to eat” like Eat Here Now – like hey, I’ve gone and checked out this place….

Beth: But then all the food blogs down in Wellington were like “Hey, I made a thing”….

Joanna: “And isn’t it twee and delightful?”

Beth: “And isn’t it twee and delightful and look at this…”

Beth: Instagram and flowers in the background. And I was just like, I want there to be a trusted source of where to eat in Wellington, but then I was like, well who am I to say what is good and what isn’t, and I wanted to give the power back to the people who are behind that plate of food. There’s thought and there’s reasoning behind it. And basically I just wanted it to be an anti David Burton. I didn’t want it to be me saying what is good and what is bad, and what is authentic, and “that’s not how I tasted it when I went to this obscure little restaurant in South East Asia”. I wanted to go to those people who have immigrated from somewhere, and they have these amazing stories, and actually – there’s so much more to food than just taste and what is on your plate, and that’s what I wanted to do.

Joanna: That is excellent. Now tell me a secret Wellington place, and I don’t want you to be all like “OMG, there’s this restaurant that’s down a little alley in Cuba Street and it’s called the Matterhorn and it’s really great”. Tell me an actual secret place in Wellington that’s great

Beth: A place that gets mentioned a lot is KC Cafe. And I don’t know if it’s actually secret, like you walk past it and it just looks like, you know, open until 4am on Courtenay Place and you probably go there when you’re drunk, but actually it’s really fucking good Chinese food that there’s not much of in Wellington. It’s cheap, and if you order from the bottom half of the menu, it’s fucking authentic. I mean, you’ve got your sweet and sour pork at the top, but like, go down the bottom and there’s tripe and weird shit, and it’s tasty.

Joanna: Awesome, how many questions is that? Four? Two? Okay, ,what is the question that you wish people asked you more about.

Beth: I love asking a few questions on my blog because I get such great answers, like “What’s something about yourself that other people may not know?” and another is “What’s a really vivid childhood memory you have around food?” and both of those questions invoke really good answers.

Joanna: Excellent! I’m not going to ask you either of those questions! Right, what’s the one thing you wish Wellington had?

Beth: A fucking rooftop bar! And a fucking ramen place! All of the things! You can put that in Capslocks!

Who should I talk to next for Drunken Conversations? Let me know! Is it you? We’ll put it on the company credit card (by which I mean we’ll go Dutch), and have a lovely time.