Huh? “Flickr … Group” … what are you blithering about man!?!? It’s okay, you’re not alone as I had to have the whipper-snappers sit me down in my bath-chair and explain what the jolly Moses they were talking about. It seems that using this newly fandangled Internet we don’t have to store all our photos in a cardboard box under the spare bed any more. No, we can “post” them up to the Web and let the world* see our holiday snaps.

And, you can tell the world where the pictures came from by either popping them onto a map or adding the place name as a tag/label.

You can even join up with like minded folks and share your photos in “community photo albums” (groups) on any subject you care to dream up.

Aha, you probably saw where this was going a lot quicker than I did when the young uns were explaining it to me with the use of short words, diagrams and plenty of naps in the sun to recover.

read on after the break …

On a recent visit ex-Wellingtonian photographer Jo Russ used her artist’s eye to snap a set of images which share a certain group characteristic; I’m not sure exactly what it is, but I feel like I’m looking at the mundane and the familiar from an outsider’s fresh perspective. More after the jump.

A sharp intake of breath

A new photography group, “gasp!”, has an exhibition entitled “a sharp intake of breath” at Finc CafÃƒÂ© from now until 10 June. The group (Geraldine Downey, Andrew Ecclestone, Stella Ramage, Paul Holley and Jordyn O’Keeffe) gave themselves the wide brief for the exhibition of creating images inspired by the word ‘enigma’. The brief exhibition catalogue explains that they were “Aiming to make space for a slower, deeper vision amongst the torrent of visual information that swamps us everyday. We wanted to produce images which asked more questions than they answered, to arouse a flicker of intrigue, a shiver of unease, or create a pause for thought.”

Following the success of the recent Wellington Flickr Group‘s exhibition at the Paramount, cames yet more photographic goodness from a Wellington flickr-ite legend A Different Perspective (aka Jim Henderson).

He’s putting on an exhibition of his work down at Island Bay’s The Bach cafÃƒÂ©, from the 1st to the 30th of April.

To get a feel for what you might be seeing, check out his awesome flickr photostream here.

Online to On the Wall

We all know that Wellington is a great place to take photos: its natural beauty, public art, lively street life and eclectic architecture all contribute to a visually stimulating city. The busy Flickr-ers of the Wellington Flickr group know this, and they’ve decided to take their best photos into the real world.

“Online to On the Wall” opens at the Paramount Theatre tomorrow night at 6pm, and runs until the 28th of March.

Thanks to the photographers responsible for allowing us to use their work as the background image at the top of each page. If you weren’t aware, the image rotates for each individual browser every 24 hours.

Here are a few things to keep your mind off the weather this weekend.

The World Press Photo ’06 exhibition kicks off at Shed 11 today. It’s been interesting to see that the publicity around town has taken a very political angle this year.

Just along the waterfront at the Museum of Wellington City and Sea (I wish they’d find a shorter name!), they’re already two weeks into the month-long Wellingtonia LIVE event. The word “eclectic” doesn’t even begin to describe the range of things going on there: there’s a performances from the Tinakori Handbell Association, a Matariki celebration with Toni Huata, hurdy-gurdies, shanty singers, ghost tours, kete weaving and a debate on the controversial Marine Education Centre. My main interest will be in the series of talks organised by the Architectural Centre entitled “Why I do architecture”. These kick off at 1pm tomorrow with Anna Kemble-Walsh and Martin Hanley of Red Design and John Mills of John Mills Architects.

From eclectic to electric: new synth-pop band The Blush Response have their debut gig at Sandwiches tomorrow night. The band may be new, but the musicians will be very familiar to Wellingtonians: Jeramiah Ross (aka Module), Rhian Sheehan, Raashi Malik (of Rhombus, among others) and Paul McLaney of Gramsci.

Finally, you could always try to figure out the location of the current Mystery Bar. If you do, you’d better get looking tonight because it’s closed on Saturday nights (that’s a clue). It also has something in common with Sandwiches.

Just quietly, there’s an intriguing little exhibition on at Shed 11 until Sunday: “Transitions” is a collection of images by photography students at Massey University. All the photographs are of the waterfront, covering diverse subjects such as the visiting “Big Lift” ship, the inner workings of the Brewery and the way that marine life manages to colonise even rubbish and pollutants. 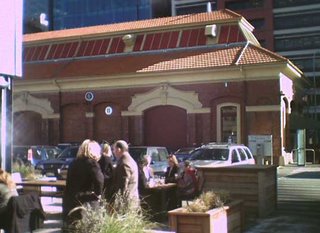 It’s all a little bit self-referential, since many of the images investigate the ever-changing nature of the waterfront, and the venue itself looks likely to see a significant change soon. There are plans afoot to make it the permanent home of the New Zealand Portrait Gallery and the New Zealand Centre for Photography. The photography theme continues next week with the start of the World Press Photo 06 exhibition.

Wellingtonian flickr-ites Felicity and Philip were narrowly pipped at the post for first picture of 2006 to hit the American-based mega-site Flickr and the 2006firstpix pool (with their snap [above] of New Years revelries in Civic Square), by Masterton’s curiouskiwi (who has taken enough fine pictures of Wellington to qualify as a local anyway), who […]

Photo © karimsahai.com. Used with permission. Lee “Scratch” Perry and The Mad Professor performed At The Town Hall last night – Karim Sahai was there with camera in hand, and got some fantastic pix. Enjoy.